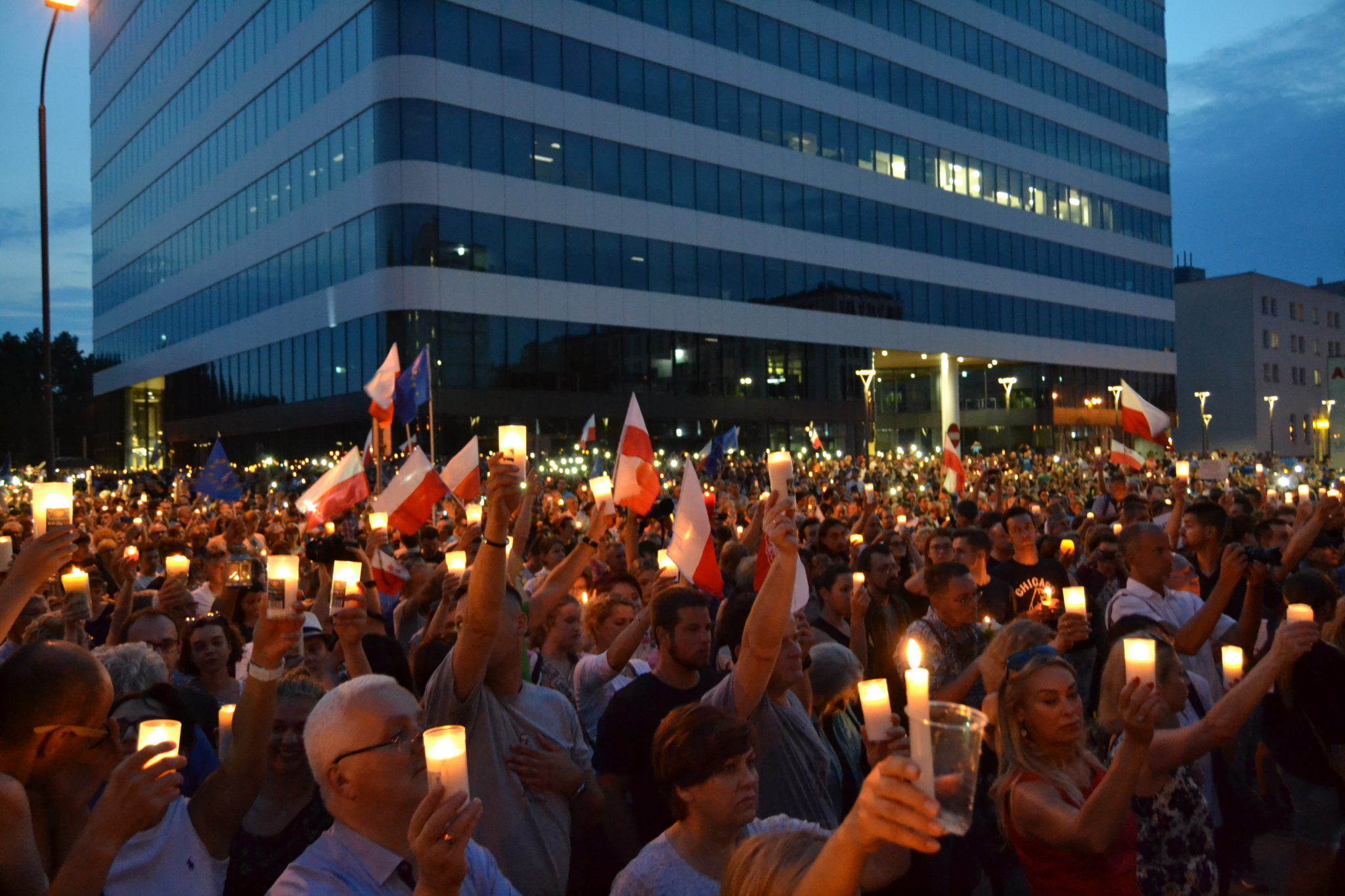 Massive demonstrations in Polish streets continued this week as thousands of people gathered Thursday night in more than 70 cities around the country. Standing before courthouses, they held candles, sang anthems, and chanted demands that President Andrzej Duda veto a proposed reform to the Supreme Court.

They were also joined by Poles living in other European capitals, who protested there in solidarity.

The bill, introduced last Sunday without previous consultation, is controversial because it would trigger the dismissal of all sitting judges on the Supreme Court and allow the government (currently controlled by the far-right Law and Justice/PiS party) to replace them. Under the present system, judges are chosen by a body of legal experts, the Council for the Judiciary. Critics say this would end judicial independence in Poland erode the separation of powers.

Defenders of the bill argue that the current selection process is an undemocratic legacy of the communist regime and that the court is corrupt and inefficient as a result.

The bill has been passed by the Sejm, Poland’s lower house of parliament, who voted in favor 235 to 192 (with 23 abstentions) after a parliamentary commission summarily rejected 1,300 amendments to it proposed by the opposition. In order to enter into force, it must be approved on Friday by the Senate, where the ruling party also holds a majority, and then signed by President Andrzej Duda.

Duda said he planned to sign the bill into law if the parliament agrees to increase the majority needed to appoint the panel that would nominate future judges.

European Commission Vice President Frans Timmermans announced they were “very close” to triggering the EU’s Article 7 against Poland, an unprecedented procedure which could lead to the suspension of Poland’s voting rights within the EU institutions. However, this would require unanimous consent of all other EU member states, and Hungarian Prime Minister Viktor Orbán has promised to veto any attempt to sanction Poland.

“We need help from outside,” said Jan Lic at the Krakow demonstration last night. Dr. Lic is a 60-year-old Law professor at University of Economics here and a member of the Committee for the Defense of Democracy (KOD), a PiS opposition group. He recalled the days of demonstrations in the twilight days of Polish communism, wishing that there was a US president “like Ronald Reagan” who might lend them support and expressing some hope for EU sanctions.

Dr. Lic said he was encouraged by the number of young people at the demonstration. However, he expressed doubts that President Duda was listening or that the conflict could be resolved democratically. “It’s going to be a long fight,” he predicted.

Sisters Agata (29) and Urszula (31) also seemed pessimistic. They accused PiS of trying to rush the bill through passage before holidays and lamented what they perceived as public ignorance about legal issues. Agata called the bill “a horrifying threat to democracy.”

Urszula, a lawyer, expressed personal frustration as well. “It’s really hard to do your job when you’re not sure what the law even is,” she said. “This is important because, although it’s sometimes forgotten, the law is about people’s lives.”

Can the EU help? “Not much,” Agata said. Her sister agreed: “Just look at them.”

They seemed more hopeful that opposition from within Poland might thwart the bill. “In two years [PiS] has been able to ruin a lot of things,” said Agata, cupping her hands around her cooling candle. “But I believe we can still fight for our rights.”

“Yes,” nodded Urszula. “There are still a lot of people who stand for rules and laws.”