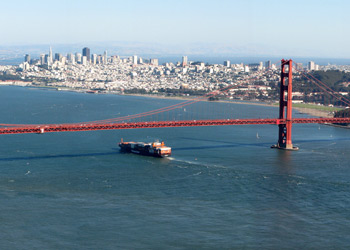 It has been a long road but Krakow and San Francisco can finally call themselves “sisters”.

In 2003, Christopher Kerosky, Honorary Consul of Poland to the U.S. and Caria Tomczykowska, president of The Polish Arts and Culture Foundation, began discussions and did the necessary outreach to establish a Polish Sister City for San Francisco. The choices were either Gdansk – for its shipping/port city status, or Krakow, whose rich cultural activites were an equal match to the Californian city. Verbal declarations began to take formal shape in February 2008, when the mayor of San Francisco, Gavin Newsom, confirmed his intentions of establishing formal ties with the city in a letter to the mayor of Krakow. The City Council finally accepted the proposal on 3 June of this year.

Events, concerts and performances celebrating this occasion began 27 June and lasted until 5 July, with the official ceremony taking place in Krakow’s Town Hall on 3 July. Krakow Mayor Jacek Majchrowski welcomed honoured guests, which included San Francisco City and County Supervisor Bevan Dufty, Protocol Officer Matthew Goudeau, and Honorary Consuls of Poland in Northern California Tad Taube and Christopher Kerosky. There were also leaders of several Polish organizations present for the festivities, including Caria Tomczykowska, the president of the Polish Arts and Culture Foundation, and Mary Kay Stuvland, director of the Łowiczanie Polish Folk Dance Ensemble, as well as over 100 representatives from the business and arts communities in San Francisco. Consul General Anne Hall, who was present at the ceremony, noted, “The agreement brings together two beautiful cities known for their rich culture offerings. I’m also delighted that Poland is well-represented on America’s West Coast.”

Mr. Majchrowksi, Mr. Bufty and Mr. Goudeau signed a contract of collaboration for the duration of five years. During this time the two cities intend to exchange information aimed at improving city management and planning by focusing on areas such as organisation of the city’s economy, the protection and revitalisation of historical and cultural monuments, and infrastructure-related issues like construction and communication. They also plan to support each other in the areas of arts and education through various gallery events and festivals, as well as aid in the collaborative efforts between universities. Both cities have declared that they will promote each other’s cultural events. San Francisco Mayor Mr. Newsom said: “I am pleased that the beautiful, innovative, and destination cities of Krakow and San Francisco are now sister cities. The sister city relationship is a wonderful expression of the strong relations between our two cutting-edge cities. The exchange of cultures and technologies enhance our city’s commitment to diversity, while providing a unique and invaluable platform to discuss and trade best practices.”

But why San Francisco and Krakow? Although very different on the surface, the two cities have much in common. For starters, the size of Krakow’s population is very similar to that of San Francisco’s 764,000 inhabitants. Both cities also hold cultural significance in their respective countries and function as centres of scientific research. Since the late nineteenth century, San Francisco has become well known as the cultural capital of the West Coast, famed for its many excellent theatres, concert halls and the Museum of Modern Art. Similar to Krakow, San Francisco is also an important centre of learning. Home to four universities, including the famous University of California at Berkeley and Stanford University, the city is associated with being the birthplace of the information technology (IT) revolution and the recent growth and importance of Silicon Valley. It was, in fact, the potential of gaining access to Silicon Valley that was a major factor in Krakow’s choice of this particular city to become its “sister”. San Francisco’s active Polish community, which supports collaboration with Polish institutions and maintains Polish traditions abroad, was also an important attribute. All things considered, the partnership between San Francisco and Krakow seems to be a match made in sister city heaven.

Along with Krakow’s sister city relationship with San Francisco, the city is twinned with more than 30 cities around the world. Rochester, NY was the first U.S. city to sign such an agreement in 1973, but the program was not very successful due to major differences between the two cities. A more fruitful collaboration was established with Nuremberg, Germany, and this will be marked by its thirtieth anniversary this year. Other sister cities include Bordeaux, France, Fes, Morocco and Edinburgh, Scotland. In the future, Krakow hopes to establish an agreement with Dublin, a city that is interested in our district heating system, as well as Rome and Tbilisi.