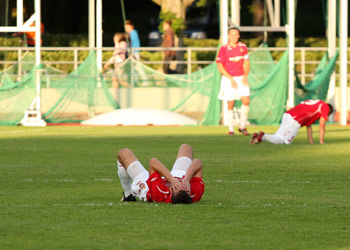 Wisła Krakow coach Maciej Skorża’s resignation has been refused by the board of the football club. Skorża handed in his resignation letter after the defeat in Estonia, against Levadia Tallinn, which made Wisła drop out of the Champions League. The final decisions were made earlier this week.

Although Skorża remains first coach and hopes for better days, the players of Wisła submitted an apology letter to their faithful supporters. It was made public by the official Wisła website. “On behalf of the entire team I would like to apologize to those, whose hopes we ruined on Wednesday afternoon,” writes Arkadiusz Głowacki, Wisła captain.

“We are aware that a lot of people believed in our good performances in the Champions League. We are very sorry that disaster happened at that stage. We would like to thank all the fans who supported us in Tallinn until the very end of the match and all those fans who kept their fingers crossed for us in Poland. We understand that today it’s hard to say ‘I’ll stick with Wisła through thick and thin’. However, please do not turn your back on the team when life is so tough. No doubt the players feel now what all Wisła fans do.”