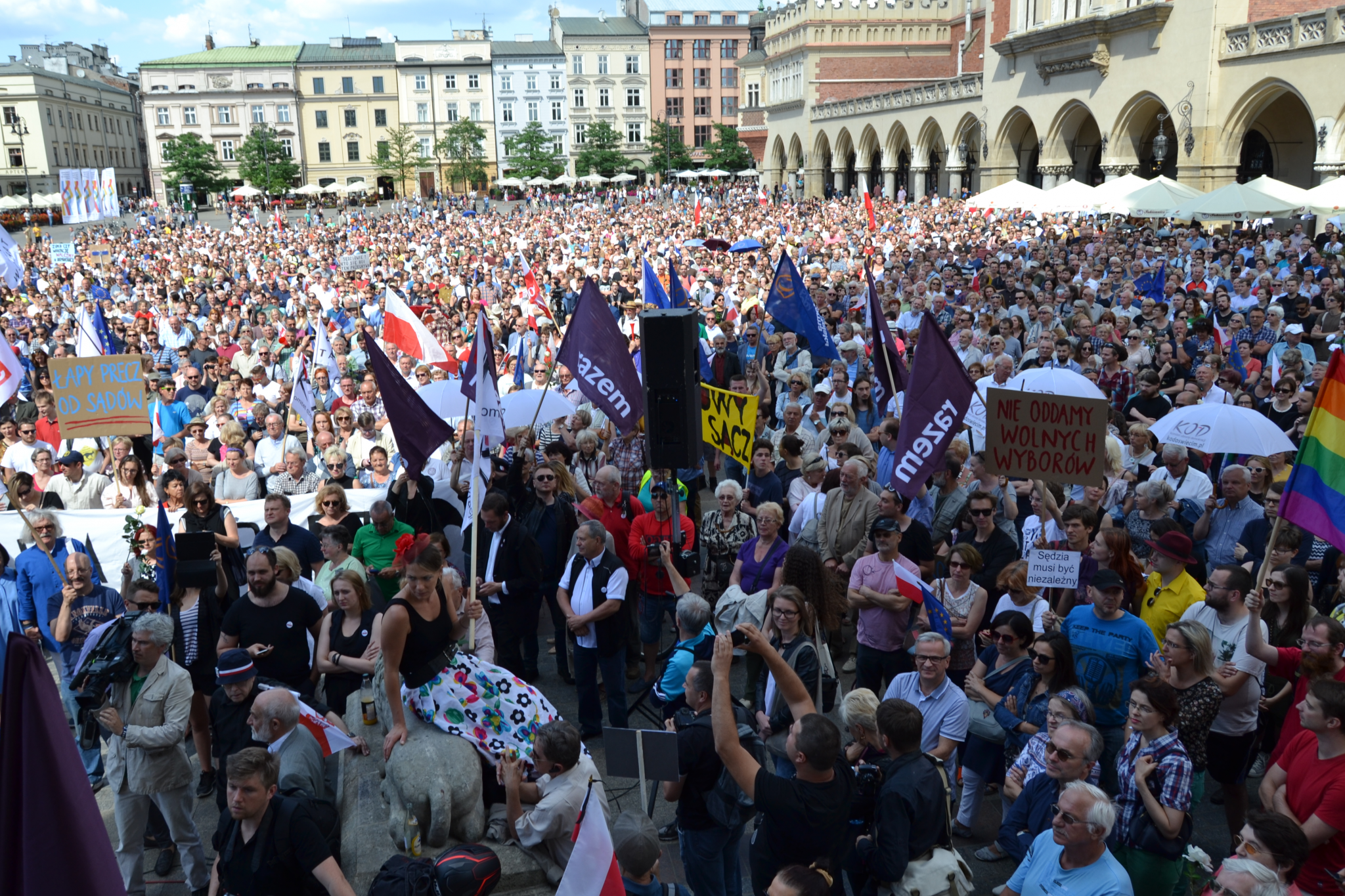 Massive crowds of demonstrators organized today in Warsaw outside parliament as well as in other major Polish cities – Krakow included. They were protesting the latest controversial action by the ruling Law and Justice party (PiS), who, without prior consultation, passed a bill on Sunday to reorganize the Polish Supreme Court.

Specifically, it would allow MPs and the the Minister of Justice to appoint judges, bypassing the consultation of judicial circles. The bill would also give the judiciary council, a body which will have almost all of its members chosen by parliament, the power to choose future appointees.

Furthermore, the day after the bill enters into force, the sitting Supreme Court judges would be obliged to resign – giving the government the opportunity to replace them entirely with members of its choosing.

Critics, including European Union leaders and the political party Razem, say that this will spell the end of judicial independence in Poland. Razem organized the protests alongside several other organizations, including fellow party Nowoczesna and PiS opposition group Committee for the Defense of Democracy (KOD).

The bill still needs to be signed by Polish president in order to become law. However, nothing at the moment suggests that President Andrzej Duda plans to veto it.

The government justified the move by claiming that the present judiciary is corrupt and reform is needed in order to make it more efficient and democratic. PiS leader Jarosław Kaczyński has called the current judicial system a continuation of its communist predecessor and has therefore insisted on radical change.

From the other side:

“It’s close to Nazi policies,” said Karolina Rostkowska, a member of the regional board of the Razem party helping to organize the protest. She fears that Poland could be headed toward one-party rule. “PiS believe they have the only truth.”

As for how these demonstrations might affect Razem’s near future – they also spearheaded last year’s #CzarnyProtest against a proposed total abortion ban, along with others – Rostkowksa has no illusions. “We don’t expect Razem to take the majority in the next election,” she said. “Rather we hope to change the way of thinking.”

Judging by the size and diversity of the protest crowd, it might be working. Robert, a local 51-year-old engineer, said that this was his first demonstration in the 27 years since communism ended in Poland.

“I was much younger then,” he laughed. But he said it was wrong to compare the current situation with those days. “Now it is more dangerous. Very, very dangerous. Communism was part of external control by Russia. But [PiS] is an internal thief of law.

“My position is very simple,” he said. “PiS wants break the Constitution.” Robert considers himself a political independent, but he fears that Poland will become “like Russia, Belarus, or even North Korea,” where citizens are technically permitted to vote in elections that are rigged in favor of one autocratic party.

“Justice should be blind,” he continued, “but now she is not. Now she has the face of the Minister of Justice [Zbigniew Ziobro].”

Also concerned were Milena and (another) Karolina, pictured above – both 24, both recent Law graduates of Jagiellonian University in Krakow. They agreed that this was “the most serious” of the controversial moves PiS have made since achieving their majority in 2015, including changes to the structure of the Constitutional Tribunal (which rules on the constitutionality of state actions) and the Polish state media (which the women described as “post-truth propaganda”).

Poland’s political future aside, Milena said she was “scared” for her personal career aspirations of being an independent judge.

Asked if they would consider leaving Poland, Karolina said she was increasingly tempted to do so, perhaps to France. “But,” she said, on the other hand, “we don’t want to run away.”

Milena, though, has no such Plan B. “I love my country,” she said. “I haven’t thought about leaving.”

Maria Rola contributed to the translation necessary for this article.