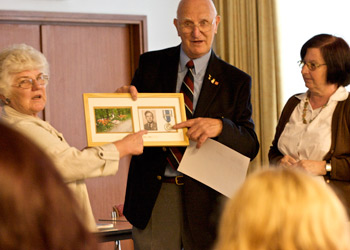 There was little to suggest that it would be anything more than a routine training flight for the seven Polish airmen who took off from Skipton-on-Swale on 23 September 1943. The navigational instructor, Flight Lieutenant Józef Wolnik, was already a seasoned airmen, having seen action in 46 separate operations. He had an extra spring in his step that autumn, as only a few weeks earlier, he had married his English sweetheart, Miss Josephine Chadwick.

But the crew would not return. Just before one o’clock, as the plane arched over the Yorkshire countryside, one wing of the RAF Wellington bomber fell clean off, and the plane dropped out of the sky. It crashed into a copse by the Leeds Liverpool canal, and all seven airmen died instantly.

Last Saturday, several relatives of the fallen men gathered in Krakow at the Novotel Centrum to receive the medals that they were due 66 years ago. There were tearful scenes as the honours were bestowed, not least out of sympathy for the big-hearted Englishman who had initiated the ceremony.

Jim Hartley was ten when the plane fell, and he still remembers boys in the next door village fetching bullets from the scene of the accident. But it was not until a few years ago that he began to research further into the story.

“Every week I used to take my little dog for a walk along the canal,” he says, “and there was one point where the birds never sang.”

On closer inspection, he saw that there were still charred streaks on the tree where the plane had fallen. But the most striking feature – or rather lack of one – was that there was not even a small plaque in memory of the airmen.

Thus began a three-year odyssey that has opened up a parallel world for Mr. Hartley, winning him many Polish friends, and the recognition of authorities in Poland and Britain.

Together with local historian Peter Whitaker, Mr. Hartley has created a dignified memorial to the airmen, crowned by the proud Polish eagle, and bearing a moving inscription in tribute to the fallen soldiers. The monument, just a few feet away from the scene of the accident, commands a sweeping view over the Yorkshire hills.

“The satisfaction of bringing together relatives in both Poland and England has made it all very worthwhile,” says Hartley. “But most of all, these men will always be remembered.

“Poland was treated shoddily in 1945,” he adds, “and there are quite a few of us in England who feel that way.”

Through hard work and some good fortune along the way, Mr. Hartley has managed to contact almost all the families who lost loved ones in the crash. Only one last mystery remains, that of Sergeant Bołesław Rychel. Born in Krakow, his mother, Bronisława Rychel, lived at ul. Kasztelanska 33, but as of yet, no leads have been found as to what happened to the family after the war. Mr. Hartley holds out hope that the last set of medals will find their way back to the family one day soon.

The inscription on the plaque in Bradley reads:

“They have passed beyond the stress and storm of mortal strife
Through the gateways of of the morning to a wider life
Asking only this of us, that we with faith and pride
Remember in the after years the things for which they died.”
(Patience Strong)