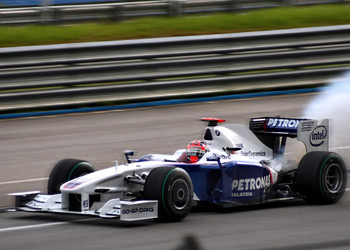 Last weekend, at the Formula One Hungarian Grand Prix, both Polish driver Robert Kubica and team manager Mario Theissen suggested that their BMW team should shift its focus to the 2010 season, as major improvements to the current underperforming car seemed very unlikely. Well, the Bavarian car company took a look at next year and have decided it won’t participate anymore in Formula One. Robert Kubica and his teammate Nick Heidfeld are therefore without a seat for 2010.

BMW first entered as a team in its own right for seven races across 1952 and 1953 before returning as a constructor after buying Sauber in 2005. Between 2000 and 2005, the Southern German car manufacturer supplied the Williams F1 team with engines. On the grid in its traditional Bavarian colours since 2006, Jacques Villeneuve and Nick Heidfeld spearheaded the team’s line-up until the former World Champion was replaced by Robert Kubica, Poland’s first F1 driver, in Hungary. In Indianapolis in 2007, BMW was the first team to run Germany’s Sebastian Vettel, replacing Kubica after his huge Canadian Grand Prix accident. A first pole position was clinched by Kubica in Bahrain in 2008 before winning the Canadian Grand Prix and leading the Drivers’ championship mid-season. Heidfeld recorded the fastest laps in Malaysia and Germany as the team continued its gradual progress, including top three Constructors’ results in both of the last two seasons.

This season initially looked promising, with Kubica fighting with former teammate Vettel for second place in the opening Grand Prix of Australia, before both crashed out of the race. Nick Heidfeld, with BMW Sauber since day one, did manage to finish second, but the Malaysian Grand Prix was shortened to less than 75 percent of the actual race distance due to bad weather conditions and therefore only scored half of the points. Since then, the BMW Sauber drivers only managed to score points twice, with a seventh place for Kubica in the Turkish Grand Prix as his season’s best performance so far, earning him only two points.

And now, by the words of BMW chairman Norbert Reithofer, BMW has pulled the plug: “Of course, it has been a very difficult decision to make. But we have decided to change our strategy as a company, focusing more on durability and being more environmentally friendly. In that sense, Formula One has become of less importance to us and with the global crisis in mind, we want to keep our expenditures in check.” Other people in the BMW company and Formula One team took the announcement as a time to reflect on the team’s achievements: “It only took us three years to establish ourselves as a top team with the BMW Sauber F1 Team,” explained Dr. Klaus Draeger of BMW’s Board of Management. “Unfortunately, we were unable to meet expectations in the current season. Nevertheless, our 10 years of Formula One experience have had a major impact on our development engineers. We have racing to thank for numerous technological innovations as well as the competitive spirit that drives us to develop mass-produced cars.”

Formula One Team Manager Mario Theissen showed his disappointment, but also understood the situation well: “Of course, we, the employees in Hinwil and Munich, would all have liked to continue this ambitious campaign and show that this season was just a hiccup following three successful years,” commented the team principal Theissen. “But I can understand why this decision was made from a corporate perspective. We will now focus sharply on the remaining races and demonstrate our fighting spirit and put in a good result as we bid farewell to Formula One racing.”

With that comment, it is very unlikely for the Sauber team to continue Formula One activities independently. The Concorde-agreement, a binding contract between teams, the International Federation of Autosports (FIA) and the Formula One Teams Association (FOTA) on the conditions and rules to participate in Formula One until 2012, will be signed this Friday. Neither BMW nor Sauber will sign the agreement. The announcement will result in inevitable job cuts, with a total of 730 workers on its F1 project spread between Munich and Swiss team base Hinwil, which has been expanded massively in recent years since the takeover of independents Sauber. Amongst them are also race car drivers Nick Heidfeld and Robert Kubica. Much depends now on the “silly season”, that time of the year where driver transfers take place. Fernando Alonso is being linked with Ferrari and with teammate Nelsinho Piquet underperforming at Renault and team boss Flavio Briatore openly expressing his admiration for Kubica, the young driver from Krakow still may have a future in Formula One. As for the adventure of BMW, that ends on November 1st of this year, after the United Arab Emirates Grand Prix and the 2009 Formula One world championship have finished.