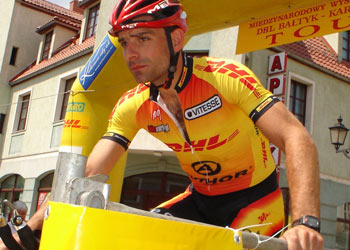 The Tour de France 2009 is over and Alberto Contador has won with a dominant performance. After two out of three weeks into the Tour, attention therefore was shifted from the results in the race, to the rivalry between the young master Contador and the returning Tour de France legend, Lance Armstrong. Contador called Armstrong “completely incompatible” to work together with, bouncing a Twitter remark by Armstrong in which he called Contador talented, but with “lots to learn”.

Armstrong (38) returned after not being present in the peloton for almost three years. But immediately he clashed with the new master of the grand Tours, Contador (26), who happened to be his teammate in the Astana formation. And so, after being defeated, feeling imprisoned within team tactics and being tired of the constant tensions within the team, Armstrong decided to form his own team: Team RadioShack. Alberto Contador is likely to join a Spanish formation, of which Caisse d’Erpagne is the favourite. That team took the Tour de France in 2006, with Oscar Perreiro Sio finishing in the yellow jersey in Paris.

It is likely that Armstrong will take along his faithful followers, such as team managers Johan Bruyneel (BEL) and Dirk Demol (BEL) and long time teammates Levi Leipheimer (USA), Yaroslav Popovich (UKR) and Andreas Klöden (GER), who finished sixth in the last Tour. Numbers two and five, the Luxembourg brothers Andy and Frenk Schleck, currently racing for Team Saxobank, have been approached to assist Armstrong’s attempt to win the Tour de France for the eighth time next year, but that would mean that they would have to give up their own chances, which significantly reduces the chances of them joining “The Boss”, as Armstrong is sometimes referred to.

Other candidates to join the team, to make the team more compatible for the classic one day races in spring and autumn are Stijn Devolder (BEL), Brice Feillu (FRA), Fabian Cancellara (SUI) and Polish champion Marcin Sapa, currently driving for the Italian Lampre formation. The Pole showed his stuff in this year’s Tour de France by escaping in the fifth stage only to be caught just before the finish. Before that, he claimed the Polish elite championship in Złotoryja (Lower Silesia). He’s known to be a very attacking driver, always taking part in long distance escapes whenever possible, especially when there are hills along the way.