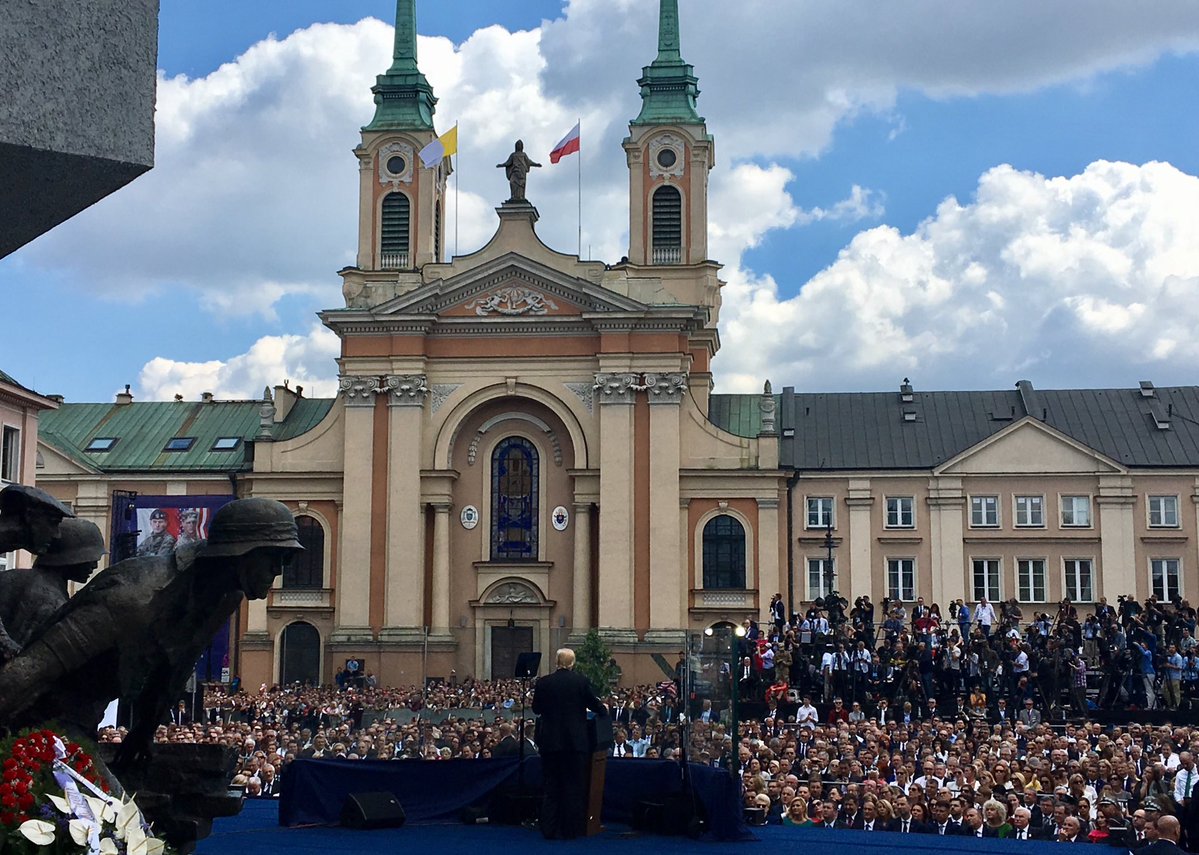 US President Donald Trump delivered a speech in Warsaw today ahead of the G20 summit in Hamburg, a meeting of the leaders of the world’s top economies. At Krasinski Square near a monument to the Warsaw Uprising, Trump touched on many of his common themes. Here are the main highlights:

Trump promised a commitment to trade with Poland, specifically in the energy sector.

Why it matters: Poland is eager to reduce its reliance on Russia, from whom it buys nearly half of its natural gas.

The US president praised “the triumph of the Polish spirit over centuries of hardship,” citing the occupation by Nazi Germany and the communist era.

Why it matters: Many political analysts believe Trump chose to visit Poland before the G20 because he is more likely to get a warm reception here compared to Western Europe. His positions on hot-button issues like immigration and the press resonate with Poland’s ruling right-wing PiS party, which bused in supporters from around the country to attend the speech.

Trump also had kind words for Pope John Paul II, crediting him with helping to end communism in Poland. He said, “The people of Poland, the people of America, and the people of Europe still cry out, ‘We want God.'”

Why it matters: 87.6% of Poles identify as Roman Catholic, and John Paul II is widely revered as a national hero. This is bound to score points with many in the audience.

He spoke against “radical Islamic terrorism,” calling the fight against it “defense of civilization itself” and using it to rationalize stricter border control.

Why it matters: Trump’s administration has instituted a ban on most visitors from Iran, Libya, Somalia, Sudan, Syria, and Yemen to the US, and the refugee resettlement program has been put on hiatus. Similarly, Poland has defied the European Union and mostly refused to take in Syrian refugees. Later in the speech Trump warned, “We can have the largest economies and the most lethal weapons anywhere on Earth, but if we do not have strong families and strong values, then we will be weak and we will not survive.”

Trump exhorted Russia to “cease its destabilizing activities in Ukraine” as well its support for Iran and the Syrian government.

Why it matters: Multiple US intelligence agencies have stated that Vladimir Putin’s regime interfered in the 2016 US election in favor of Donald Trump, and there are several ongoing investigations into this as well as ties between Russian state actors and members of Trump’s inner political circle. Also, many in Poland still fear that the conflict in Ukraine could spill across the border, and they are deeply suspicious of Russian influence in the region.

He  warned against “the steady creep of government bureaucracy that drains the vitality and wealth of the people.”

Why it matters: This comment is likely to find sympathy among many in Poland frustrated with long queues at government offices. Moreover, though, Trump’s comments come at a time when US Senators from Trump’s Republican Party are striving to repeal the Affordable Care Act. “Obamacare” (as it is informally called) is viewed by some on the right as government overreach, and Republicans aim to replace it with a stripped-down version under which millions of Americans would lose their health insurance.

Trump reiterated his longtime demand that European NATO members pay more for their own defense.

Why it matters: Currently only five of the 28 members of NATO are meeting their goal to spend at least 2% of their GDP on defense. Poland is one of them, which Trump acknowledged. Some European leaders fear that Trump’s critical comments on the organization signal a weakening of US commitment to the transatlantic military alliance formed to oppose the Soviet Union during the Cold War.

The speech was interrupted several times by loud, supportive chants from audience members of “DONALD TRUMP!” The crowd was not free from opposition, though — others shouted accusations of racism, and a group of Polish women appeared in costumes inspired by Margaret Atwood’s 1985 feminist dystopian novel The Handmaid’s Tale to protest what they view as a long record of sexism by the president.

Tomorrow the two-day G20 summit will begin, during which Trump is scheduled to have a highly-anticipated meeting with Russian President Vladimir Putin – although what exactly the two leaders will discuss remains to be seen.

28 thoughts on “Trump in Warsaw: What He Said (and Why It Matters)”