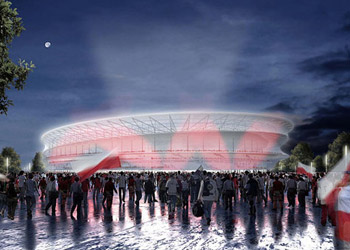 UEFA President Michel Platini began his second day in Poland this morning on an optimistic note. Having visited Gdańsk and Poznań yesterday, the UEFA head began his tour of Wrocław this morning, where he was clearly impressed by the progress on the new stadium.

Yesterday, Mr. Platini, along with a UEFA delegation, began his second tour of Poland with the Baltic city of Gdańsk, where he spent five hours, mostly examining the site of the Baltic Arena. Speaking at a press conference, he showed his enthusiasm for the project: “I must praise the city president and all the teams involved for an amazing project, not only of the stadium itself but also of the revitalisation of the neighbourhood where it’s located.” Mr. Platini also met with Lech Wałęsa in Gdańsk.

Afterwards, the delegation moved on to Poznań. There, he gave his congratulations to the city’s mayor, Ryszard Grobelny, upon seeing the construction site of that city’s stadium.

While the four Polish host cities are certain they will host Euro 2012 matches, what’s uncertain at the moment is where the quarter finals will take place. With four quarter final matches and two semis up for grabs between potentially six or eight cities in Poland and Ukraine, inevitably a battle will soon take place over who gets to host the most prestigious matches of the tournament.

See also: Money Troubles in Kiev, No Timetable in Ukraine