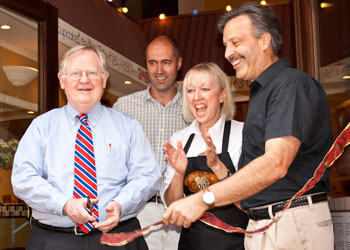 Victor Ashe, who has held the position of U.S. ambassador to Poland since June 2004, was to finish his term in February 2009. However, he was asked to extend his stay until this September, when he will pack his bags in Warsaw and return to America. President Barack Obama has just nominated Lee Feinstein, a foreign policy expert, as the new ambassador, and if his appointment is approved by the U.S. Congress, he will soon take up residence in Warsaw. But before he steps down, the Krakow Post met with Ambassador Ashe at the grand opening of a More Than a Cookie shop in Krakow. Ambassador Ashe – who met the shop owners at a 4th of July celebration – spoke with the Post briefly after sampling the shop’s baked goods.

Krakow Post: Your term as ambassador to Poland ends very soon. How do you feel about leaving?

Victor Ashe: I have mixed emotions upon leaving. A part of me feels sadness because it’s been five years of wonderful hospitality and really terrific memories. But on the other hand, after five years it’s probably time to move on. I have friends in my home city in Tennessee and I look forward to going back and visiting with them.

KP: What would you count as the biggest successes of your term?

VA: I think in the five years here I’ve reached out to local cities and governments of Poland and tried to put a human face on the United States and push public diplomacy.

KP: And do you think there’s anything more that you could have done?

VA: There’s always something I could have done more – places I should have visited that I just didn’t get to. I’d been to over 180 Polish cities, and to Krakow about six or eight times a year.

KP: And what about the issue of getting Poland on the American Visa Waiver Program? Has there been any progress made?

VA: It’s up to congress to make changes if they so desire – no one hopes that would happen sooner than I do. I think Poland is close to being in the Visa Waiver Program, and with a little more progress we’ll get there. But it’s probably a year or so away.

KP: Have you met Lee Feinstein [the incoming ambassador]?

VA: I met him last week. He’s a very nice person and I think he’ll be a very able ambassador.

KP: Do you have any advice for him?

VA: Enjoy the time you’re here and see as much of Poland as possible.

KP: And finally, what will you miss most about Poland?

VA: The warm friendliness of the Polish people.