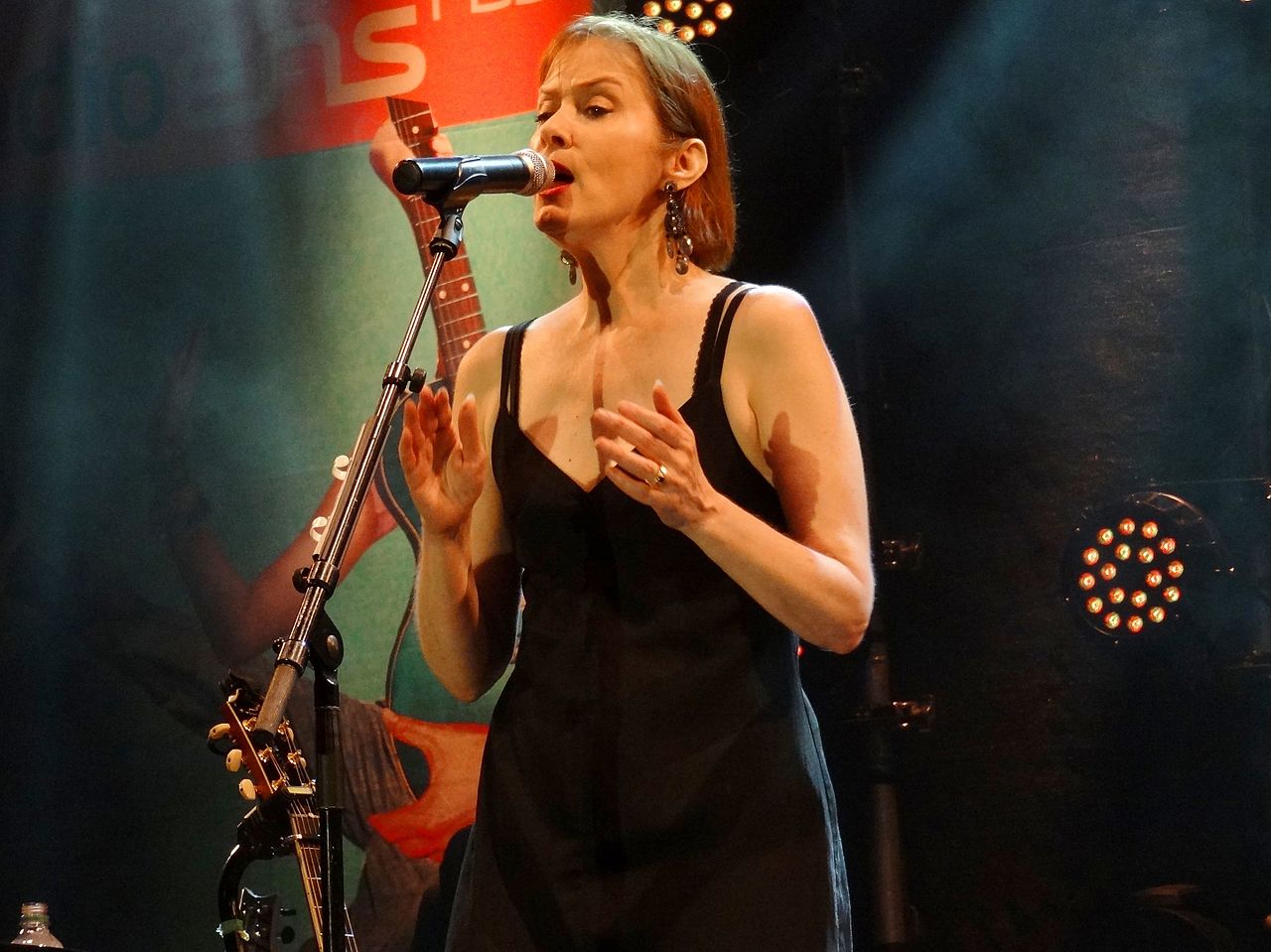 The Fast Folk movement in New York’s Greenwich Village may not have had the cultural impact of its folk scene predecessor two decades earlier, but it did bring acoustic storytelling music back into the mainstream, and it was responsible (through its attendant magazine/record label) for introducing such great singer/songwriters as Lyle Lovett, Shawn Colvin, Lucy Kaplansky, Richard Shindell, and Michelle Shocked, among many others.

SUZANNE VEGA is the most successful artist that the scene produced – and not only commercially. Her 1985 eponymous debut stood out with a directness and simplicity that was a complete contrast to the cluttered techno pop, processed soul, and pop metal of the era. Armed with just acoustic guitar and voice, delicately accented by keyboards and orchestration, she was a proverbial ‘breath of fresh air’ for many, and I remember hearing “Marlene on the Wall” and “The Queen and the Soldier” on public radio and being struck by the purity of her voice and unadorned honesty of the songwriting.

Of course, it was SUZANNE’s second album, Solitude Standing, that was the commercial breakthrough, with “Luka” and the DNA beat-heavy remix of the acapella “Tom’s Diner”. It went Top 20 in most of the world, and is still a perennial seller.

She’s released seven studio albums since, from explorations of electronica (1992’s excellent 99.9F°) to ruminations on divorce (2001’s sometimes moving, sometimes caustic Songs In Red And Gray). She’s also collaborated with artists from Joe Jackson to Danger Mouse to the king of garmonbozia himself, David Lynch.

VEGA’s most recent albums, Tales From The Realm Of The Queen Of Pentacles and last year’s Lover, Beloved: Songs From An Evening With Carson McCullers, are both quintessentially her, yet bring a new sense of character-driven storytelling to her usual confessional style (the latter is actually based on a play she authored and performed in 2011).

Her live shows invariably include all of the songs you’d hope for, and even if you’ve lost track of her since the 90s, you’ll still know about half the set. And the stuff you don’t know will most likely send you to the record store the next day (or to Amazon, or iTunes, or whatever it is people do now.)

The Impact Festival continues this week with an innovative band that seems to be currently caught in a bit of a creative crisis.

With their sophomore album Toxicity, SYSTEM OF A DOWN proved that heavy metal had a future in the 21st century. With radio staples “Chop Suey,” “Aerials,” and the title track, they introduced an insane yet accessible kineticism with an almost Zappaesque sense of adventure that is truly their own.

But after just two more albums – the most recent of which was 2005’s Mezmerize – the band went on sabbatical, reconvening in 2010 as a touring entity. But despite reports of at least 15 songs finished, they’ve yet to announce any firm (or even tentative) release date for a new record.

So it’s a real testament to their staying power that a dozen years after their last album, they can still fill arenas. This is largely because of the intensity of the live show, which often runs as long as 30 songs and goes all the way back to their first demo tape, but has yet to include any new material.

ROYAL REPUBLIC are a hard rock band from Sweden, while RED SUN RISING hail from Akron, Ohio, and have a more garage rock edge.

When ANIA last played here, at Klub Studio in April of 2016, she had just released Dla Naiwnych Marzycieli (For Naive Dreamers). Like all but one of her previous albums, it went on to platinum sales status, with several best selling singles to its credit. In addition, it was one of the Top Ten selling albums in Poland last year.

So it’s no surprise that a year later, she’s performing in the larger and more prestigious confines of the ICE Center, a much more fitting venue for her expansive ballads and retro rock style.

Last week’s feature artist, NAT OSBORN, put on one hell of a show last week at Alchemia with his full band. Now comes a rare chance to see this versatile musician in even more intimate environs for a mere 20 zł (15 before day of show). His music will translate perfectly into ‘piano man’ form, as evidenced by this clip.

And if you feel like getting out of town for a bit, may I suggest:

With the new HELLHAVEN album Anywhere Out Of The World, they have proven themselves as one of the best progressive metal bands in Poland. Their combination of clever arrangements, metallic riffing, and solid songwriting is completely unique in the way it synthesizes elements of all kinds of heavy metal, and there is palpable growth from their earlier albums. They don’t play live often enough, so if you missed their recent show here in town, it’s well worth the drive.

Sure, even now, with the band doing the ‘middle-age retirement fund reunion tour’ rounds, there is no shortage of ‘Crazy Axl’ stories, with many a restless audience having to wait hours for His Highness to deem it the right time to play. But perhaps the biggest shock of the reunion that was never supposed to happen (and really still hasn’t, as this lineup consists of only 3/5 of the band that recorded the classic Appetite For Destruction album), is how GOOD they actually sound together.

Not that anyone would mistake the current incarnation for the out-of-the-furnace drugged-up unhinged explosion that was the Guns of 1988, but it does compare favorably to the live shows of the early 1990s Use Your Illusion era, even if Axl’s voice sometimes conjures up visions of Ethel Merman in us older folk (Google it, kids).

The first time I saw this band live was as opening act for Aerosmith in 1987, just as Appetite For Destruction was beginning to catch fire, and they were one of the most exciting hard rock bands I’ve ever seen, at the very moment when they knew they were about to break big yet still had something to prove every night. I saw them later several times, and was lucky to always catch them on nights when things went well. They’ve been remarkably consistent (well…for them) since this reunion jaunt began, so this show should be well worth the journey.

Never say never, but this is probably the closest we’re ever going to get to a real GnR reunion, and even if it’s missing that quirky swing that was provided by Izzy Stradlin’s jagged rhythm guitar and Steven Adler’s almost-jazzy drums, it’s still worthwhile just to see Slash (who’s playing better than ever), Duff McKagan, and Mr. Rose play some of the great songs of the late 80s and early 90s. They display a lot of heart in this clip of their recent tribute to Chris Cornell, with a spirited cover of Soundgarden’s “Black Hole Sun”.