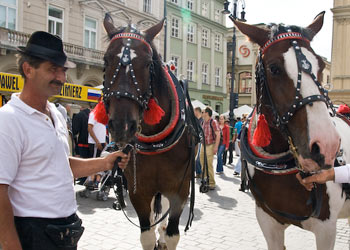 The past few weeks have seen a series of accidents involving the horse carriages that have become a regular presence around Krakow’s Old Town. Now, city authorities are debating whether or not to ban the carriages from entering the Market Square between noon and 5 pm.

The reasoning behind the ban is that those are the hours with the highest foot traffic on the square, as well as the highest temperatures, which can leave the horses tired or dehydrated. The stand on the north side of the square, where the horses currently wait for passengers, will be moved, though a new location has not yet been announced.

In addition to the proposed ban, inspections of the carriages began yesterday. So far, inspectors have found non-functioning headlights and other minor infractions. Next week, veterinarians will examine the horses to ensure they are being properly cared for and are not overworked.

The carriage drivers have contracts with the city, allowing them to operate as long as their carriages and horses are maintained according to standards set by the city.

While city authorities stress that this proposal is to ensure the safety of both the horses and the Cracovians and tourists on the Market Square, carriage drivers worry that it will seriously hurt their business. As one carriage driver told Gazeta Wyborcza, “For us this would mean the end [of our business].” But the city is afraid of facing future accidents if they do not act.

In the most recent accident, two 12-year-old girls were injured, and one even suffered a broken leg. Before that, two horses crashed into tables in front of the Yummie restaurant on the square after being spooked by a theatrical group, injuring four and causing property damage.