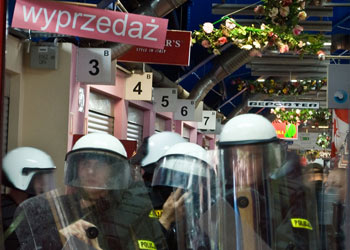 The video footage looked like something from many years past: police in full riot gear pushing into the crowd; the oppressed workers, pushing back and dodging tear gas as they battled to save their livelihoods from government bullies. However, in this instance, the government is insisting that it was the workers who acted as the bullies – and the law is on their side.

Yesterday, 21 July, Warsaw‘s Plac Defilad, site of the Palace of Culture and one of the city’s largest and most famous marketplaces, was also the site of a brutal scuffle between city authorities and the traders who have stalls there.

The market, called the Kupiecki Dom Towarowy (KDT), transformed from several dozen makeshift tin shacks in the early 1990s to two large permanent halls, which are now to be removed to make way for a modern art museum and a subway station. While this decision was made last year, it was not until yesterday, when city authorities decided to enforce the legislation and tried to evict the traders by force, that the situation came to a head.

The traders’ lease on the building had ended on 1 January 2009, and a court order required that they leave the premises two days ago. However, stall owners cited a promise by the city made 10 years ago that they would receive another location on Plac Defilad when they chose to barricade themselves inside the building.

When city bailiffs attempted to enter the trading hall, the situation turned violent. Traders began spraying fire extinguishers and throwing objects at the bailiffs, driving the 200 plus strong security force, accompanied by police officers in riot gear, to forcefully enter the premises. At one point, security guards used tear gas, a moment which was captured on film by news cameras and will be investigated to determine whether any laws were breached. After being forced out, some traders blocked off the busy Marszałkowska street and threw rocks at the police.

Altogether, 15 police officers, four security guards and two city guards were wounded in the conflict. 15 people were detained and may face charges. There were several people hurt and hospitalised amongst the traders as well, leaving a total of 35 people in the hospital.

To add insult to injury, Warsaw Mayor Hanna Gronkiewicz-Waltz has said that because the traders refused to leave, they will be responsible for paying for all damages, as well as for the use of the private security guards who entered the building and are still standing guard. She said the traders had been offered several possible locations to which the halls could be moved, but all of them are on the outskirts of the city and fail to offer the same levels of business the traders had grown accustomed to.

Damian Grabiński, the KDT advocate, has told the press and city authorities that the stall owners insist on staying in their present location until a new hall could be built elsewhere, which likely would not happen until 2012.

Meanwhile, public opinion is still divided on the matter, as an online battle rages on both Twitter and its Polish equivalent, Blip.pl, over yesterday’s violence.