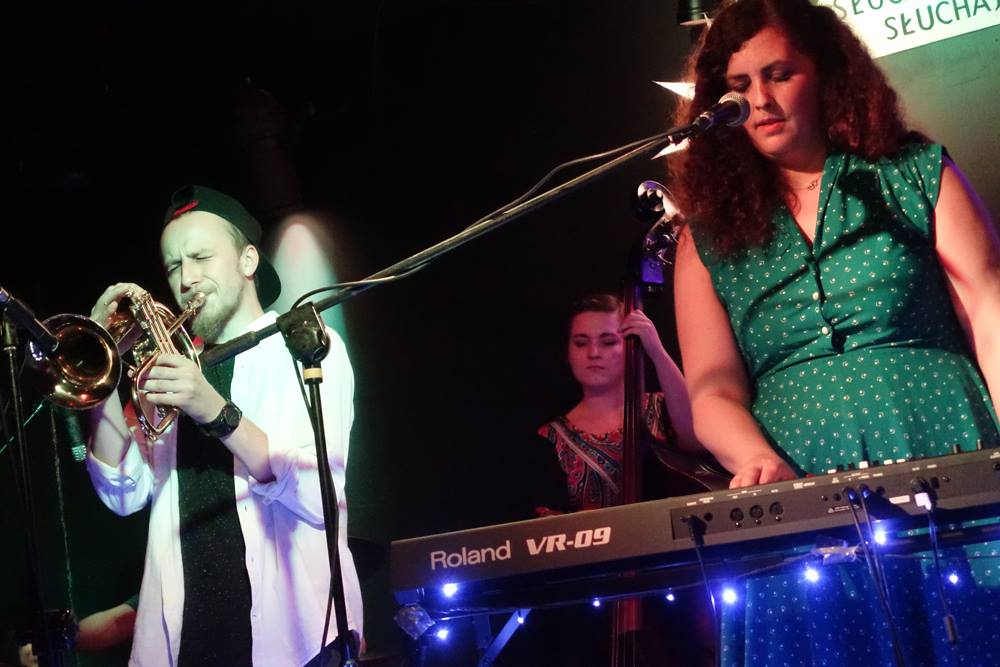 “We’re not a folk band,” wrote Scotia Victoria to me by way of introducing her band VLADIMIRSKA. Originally conceived as a solo project, she has expanded the lineup to a half dozen very good musicians capable of a wide variety of arrangements, which may be part of the confusion. “A lot of people categorized us as a folk band immediately after the first album (which indeed, sounded a bit folky due to not having percussion and my main instrument on that album being accordion),” she continues. “If we have to be categorized, I usually tell people we’re ‘alt-pop’ or ‘indie folk-pop’ but the categories end there. We don’t play klezmer, gypsy jazz or cabaret – and I’m not sure why people often hear that in our music.”

Well, to be honest, I hear what appear to be those influences sometimes as well, although the songs certainly don’t fit comfortably inside any of those genres. Maybe it comes from the international melting pot that is VLADIMIRSKA – members hail from Canada, France, and Poland, and artists can’t help but absorb all of that culture, by osmosis if nothing else.

At any rate, with the new album, Paper Birds, Scotia is hoping to dispel any such notions. And as you can hear below, she has largely succeeded. But it’s Scotia’s distinctive voice (by which I mean her songwriting voice AND her actual singing) that really give the band its unique character. Imagine, perhaps, a more emotive yet less depressed Suzanne Vega coupled with a musical fearlessness, and you begin to get the idea.

But don’t take my word for it – check out the link to the entire album, and then go to the show. And buy it!

On a personal note, during my recent long hospitalization, Scotia sent me a link to her album, with the words, “Even though this might not be your usual type of music, I sincerely hope that there’s something in my album to lift you up a bit while you’re going through your tough times. It’s why I make music – to make people happy. When a song I write brightens up someone’s day, I feel like my existence on the planet is justified.” It was a beautiful gesture at a difficult time, and it did indeed brighten more than one dark day. So if you need a bit of a spiritual lift (and who doesn’t?), you need to be at Alchemia Saturday night.

THE RAZCALS are a one-off pick up band of Krakow musicians from such local bands as Hot Tamales Trio, The Silver Owls, and The Moodswinger. Expect some serious blues.

If your tastes run to something a bit darker – okay, a LOT darker, THEM PULP CRIMINALS may be just what you need. Their debut album, Lucifer Is Love, is a uniquely Polish take on the kind of intense dark southern Americana that runs deep in the soul of artists from Johnny Cash to Nick Cave to King Dude. While essentially a duo, the live band often adds a couple of additional musicians.

Krakow’s NEAL CASADY & THE FABULOUS ENSEMBLE are cut from much the same cloth, while KUBA DUDA is an experimental guitarist performing a solo set.

It’s a tough situation; the songs that made you a headline rock band have also cemented your reputation forever as a novelty act. Cast your mind back 25 years, if that’s possible. Remember “(I Hate) Everything About You”? How about that preudo-metal cover version of Harry Chapin’s “Cats in the Cradle”? Well, those were ENORMOUS million+ selling records for California band Ugly Kid Joe that, against all odds, had the staying power to make it possible for the band to reunite in 2010, tour the world, and eventually record a new album.

And while they’re essentially just a good time pop metal band, at their best they have a groove and funk influence that should have afforded them a bit more credibility over the years. But unlike, say, the Beastie Boys, they never managed to rise above their initial goofball impression, even though they clearly had the chops to do so. Hell, maybe they just didn’t care.

But if it’s some early 90s nostalgia you’re after, you can rest assured that they will provide exactly what you expect. They may even throw in a Black Sabbath or Motörhead cover along the way.

Since her debut with the band Ya Hozna in 1989, RENATA PREZMYK has released nine albums as a solo artist, and several notable collaborations with such well-known Polish singers as Kayah and Megitza. This free afternoon show is being called The Best of… and promises to deliver an overview of her nearly three decades of albums, most of which have attained Gold status in Poland. Musically, she can move effortlessly from post-punk to torch song with a mind-boggling finesse. Check out her gorgeous Polish-language version of Leonard Cohen’s “A Thousand Kisses Deep” below, and I’ll see you on Sunday…