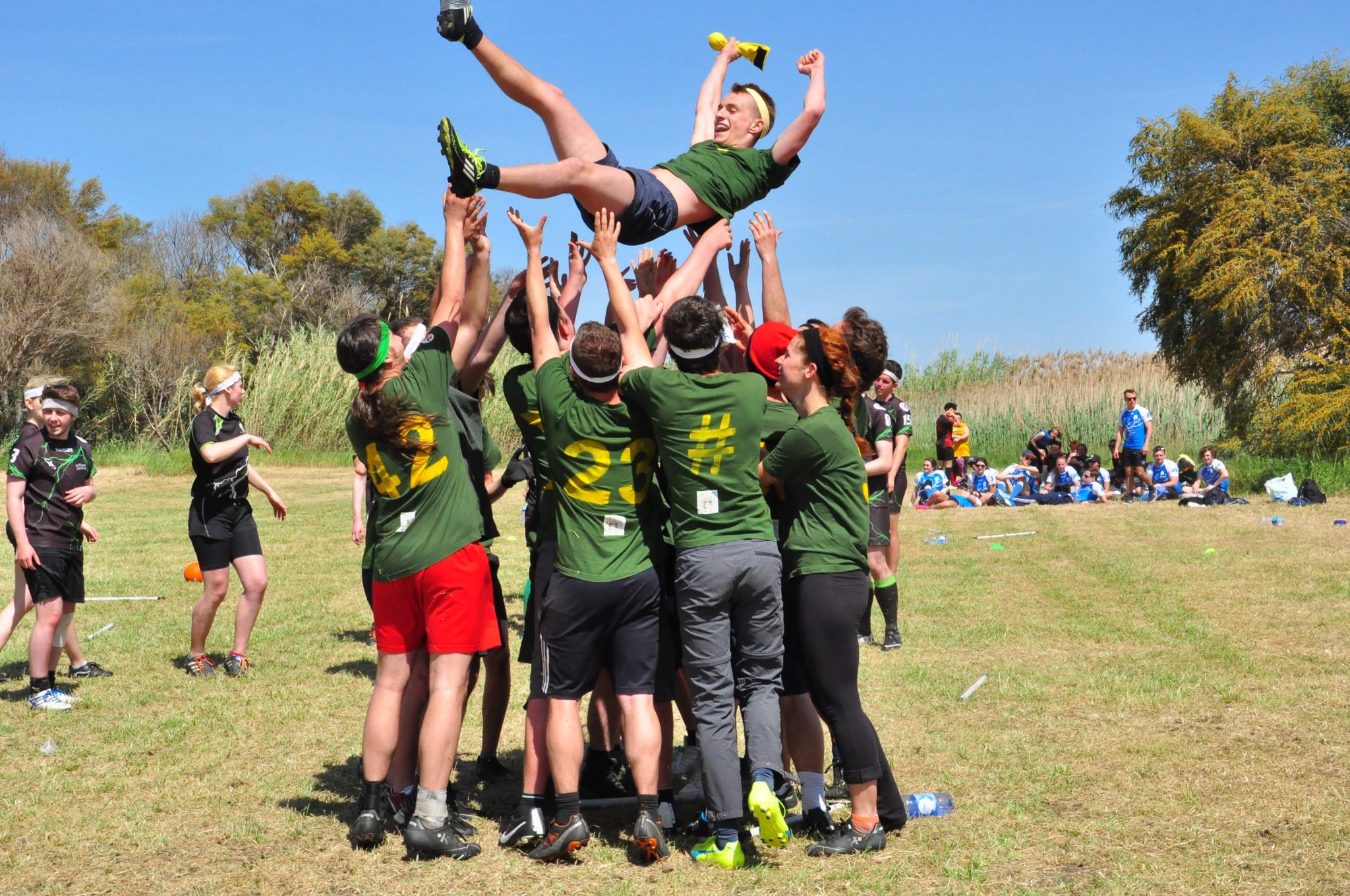 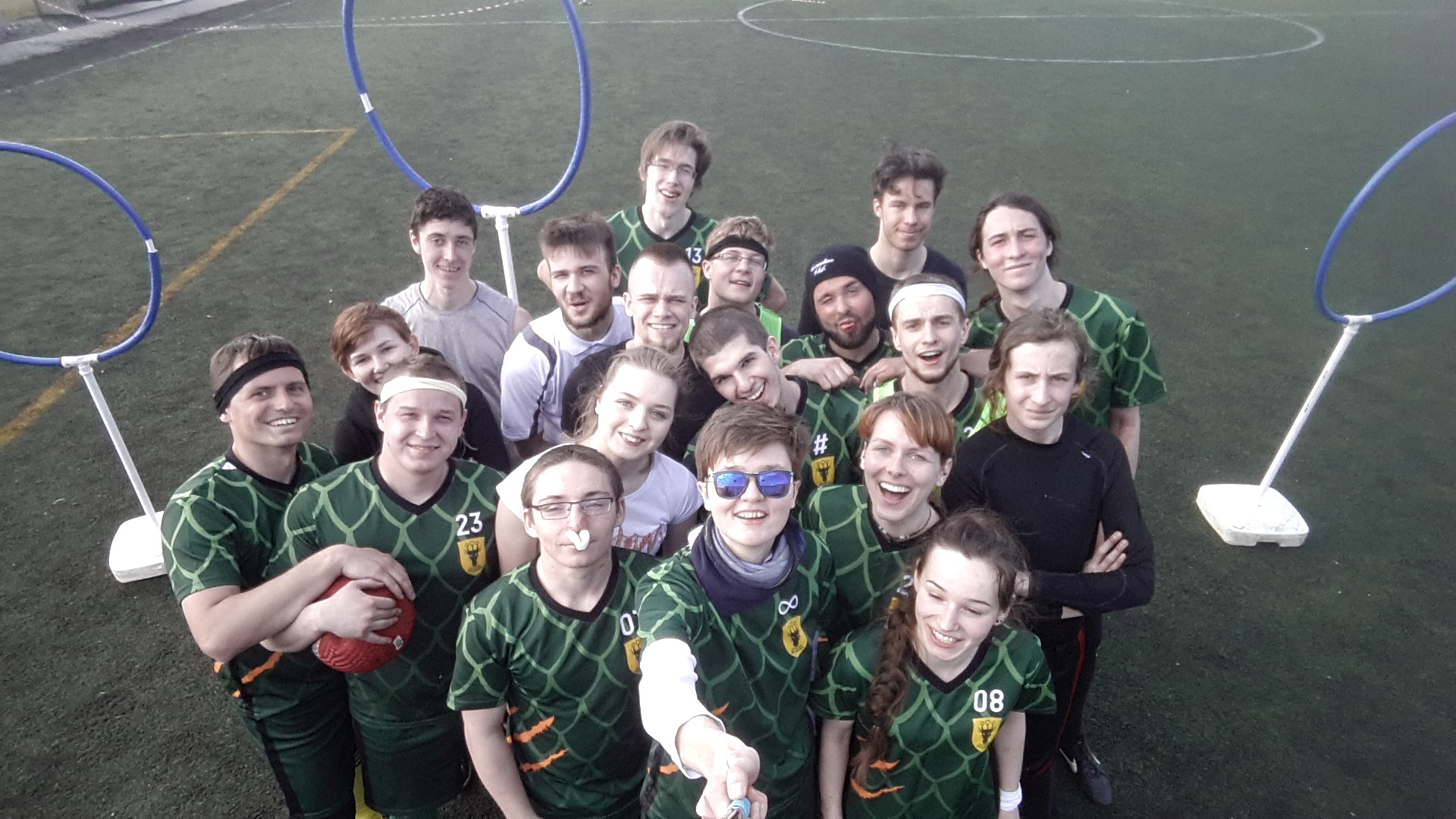 According to the local legend, a dragon was terrorizing Krakow once upon a time. But for the last two years the city has also had the Dragons, who have been terrorizing their opponents on quidditch pitches.

“Quidditch”… the imaginary sport played by wizards on their flying broomsticks? Yes, that’s it! Inevitably linked to Harry Potter, what comes directly from the wizard’s world became a real life sport since 2005. It developed a structured discipline, with several federations around the world, an official Rulebook, and local and international competitions. Impressive.

Mary, the Krakow Dragons team captain, kindly invited me to one of the team practice sessions to discuss quidditch: “We are training twice a week in Park Jordana. You’re welcome to play with us anytime.” (Thanks, Mary!).

But first, let’s understand what it is. Quidditch is a discipline somewhere in between several team sports such as dodgeball, handball, or rugby, completed with its own specific rules.

“The official game rules are all listed in this 200-page Rulebook, released and updated by the International Quidditch Association (IQA),” says Mary. Each team has a Keeper, a Seeker, two Beaters, and three Chasers. The game is played with three types of balls (a Quaffle, three Bludgers, and a Snitch).

Chasers score points by throwing the Quaffle between one of the hoops (three hoops on each side), while the Beaters are using the Bludgers to set back players from the opposite team and prevent them from scoring. Keepers act as goalkeepers around the hoops and also play similar to Chasers in attack.

Are you still following..? OK, good. So, finally we have the Snitch runner, a neutral participant wearing a yellow outfit who carries a tennis ball in a sock – the Snitch, attached to the back of their shorts (like a tail). Chased by both teams’ Seekers, the Snitch runs away and can defend himself. A goal is worth 10 points, catching the Snitch brings 30 points, and the match ends once someone catches the Snitch.

And let’s not forget the significant characteristic of the game: each player (except the Snitch runner) must hold a broomstick between their legs while on the pitch and mustn’t drop it.

I also found out that quidditch shares very positive values, such as mandatory gender parity on each team: “There is a Four Maximum Gender Rule which says that the maximum number of players of the same gender who can be on the pitch at the same time equals four, Mary says. “This is what is important – gender, not sex, so if you consider yourself another gender than [the one assigned at birth], you count as this particular gender.

“Swearing is also forbidden, and referees grant warnings to players if they hear it. So as captain, I also need to ensure nobody swears too much, or at least too loud!” She laughs.

Mary, how do people usually react to it?

“They are amused or surprised at first, but once they see it, they realize that we are playing seriously. Fun is of course the main element motivating all of us, but it also requires a minimum of physical effort, technique, and tactical mind. I am a big Harry Potter fan myself and I understand that the link is inevitable, but I don’t really like the systematic comparison, because I consider it as a real sports activity, not only a game.”

I ask her how busy they are, especially her as team captain.

“I am very busy but I love it! We are very actively promoting and advertising the sport and our team at AGH, at the dorms where some of us live, and around us. We’re organizing recruitment sessions to find new players. The last one was positive because we got many new joiners, and we’re receiving many requests to join the team through our Facebook page. And in parallel, I recently passed the test to become an official quidditch referee.”

“Częstochowa is expected to join the league,” Mary tells me. “We are also helping new teams to form, so if anyone wants to start a team – contact us! With this current format, the Polish Championship sees all the teams playing each other on the same day. We hope to have more teams joining, so in the future we can get to a league with weekly games, as it is in most team sports.”

While the discipline is fighting to find its spot among older sports, the amount of new leagues and clubs around the globe is impressively increasing year by year. “Our team was founded in 2015. It was created by a girl from the University of Science and Technology AGH, who spent time doing Erasmus in Norway. She discovered the sport over there, played it with the local university team, and founded Krakow Dragons when she came back to Poland.”

And just like the Dragons, the quidditch league in Poland is very young: “The Warsaw Mermaids won the very first Polish Championship two years ago, and we won it last year! But the Mermaids won it again this season.” The rivalry between Warsaw and Krakow cities seems to appear in most sports disciplines, and quidditch is no exception.

Thanks to their national title last year, the Dragons automatically qualified for the yearly European Quidditch Cup (EQC) and travelled to Gallipoli (Italy) for the 2016 edition. Their Polish League title had a great impact in the community, and they entered the EQC with a status of ‘team to watch out for’.

The Krakow Dragons had originally made a name by joining the quidditch family in style, winning the Polish Championship only two months after officially registering the team. However, their lack of experience made the difference in Gallipoli. Though despite losing to the Madrid Wolves, Nottingham Nightmares, and other teams, the Dragons were able to taste the high European level and gain significant experience.

In comparison, the US and Canada are steps ahead, as they have a professional league (Major League Quidditch) and more advances structures and organization. But quidditch in Poland and Europe is growing, with new federations created each year, new clubs, national teams, a World Cup (featuring USA, Canada, Australia, Korea, and more). In Europe there are the European Games and yearly competitions such as the EQC, plus new ones such as the Slavic Cup (the Dragons will play during its first edition in Warsaw). A lot of events to gain experience from.

What matters the most is the fun that surrounds these events, which are, in the end, occasions to meet new people and share fun times with other quidditch lovers.

“We are always looking for new players to join, so feel free to stop by or message us. And you don’t need to be a Harry Potter fan or have watched the movies to play quidditch!”

Check out the Krakow Dragons Facebook page for more details, and send Mary a message if you’d like to get involved!