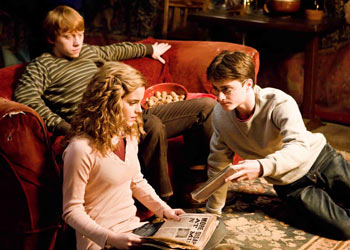 Fans of the Harry Potter books and films in Krakow had been looking forward to this moment for quite some time. It has been two years since the previous incarnation of the magical saga hit the big screen, with 2007’s Harry Potter and the Order of the Phoenix. And now, the next film was set to premiere right here in Krakow.

The Polish premiere of the highly anticipated sixth film of the Harry Potter saga – Harry Potter and the Half-Blood Prince (Harry Potter i Kśiążę Półkrwi) – took place tonight at the Kijów cinema. Arriving on the red carpet were two of the film’s young stars: Bonnie Wright, who plays the role of Ginny Weasley, the red-headed little sister of Ron, and Matthew Lewis, whose Neville Longbottom has been a faithful friend of the three main characters throughout the series.

The young actors greeted fans, primarily consisting of pre-adolescents and their parents, on their way into the Kijów cinema, and then addressed the seated crowd before the start of the film. Remarking on the series’ popularity worldwide, including in Poland, Wright stated: “The film has spread so far and wide, I couldn’t imagine how popular the film is around the world.”

After the screening, witches and wizards of the more local variety entertained the young guests with magical “potions”, sweets, and other delights.

Harry Potter and the Half-Blood Prince opened in the U.S. and parts of Europe last week, and has seen a successful turnout, bringing in $400 million in box office sales already. The film opens throughout Poland this Friday, and will continue to screen at Kijów cinema in Krakow.

Below: Actors Bonnie Wright and Matthew Lewis at a press conference in Krakow earlier today: