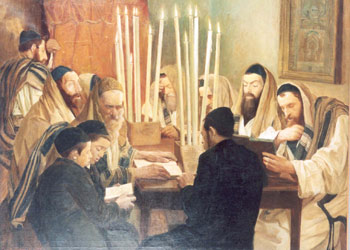 This month, the Tel Aviv Museum of Art is re-enacting an exhibition – one put on over 100 years ago by two Polish artists. This “artistic re-run”, titled “Fragmented Mirror, Exhibition of Jewish Artists, Berlin, 1907,” was originally conceived by the sculptor Alfred Nossig of what is now Lviv (Lwów at the time), and Leopold Pilichowski of Piła.

The pan-European show was originally entitled “An Exhibition of Jewish Artists,” and was shown in Berlin in 1907. The re-enacted exhibition features around 100 works from the same artists whose works hung in Berlin, including several works from the original exhibition.

Among the many important Polish artists who participated in the show are: Maurycy Gottlieb, Maurycy Minkowski, Artur Markowicz, Jerzy (Georg) Merkl, Samuel Hirszenberg, Leon Hirszenberg, Maurycy Trebacz, Leon Rosenbaum, Jakub Weinles, Alfred Wolmark (originally from Warsaw), and Lesser Ury (who received an entire room for himself, and originally was from Międzychód near Poznań).