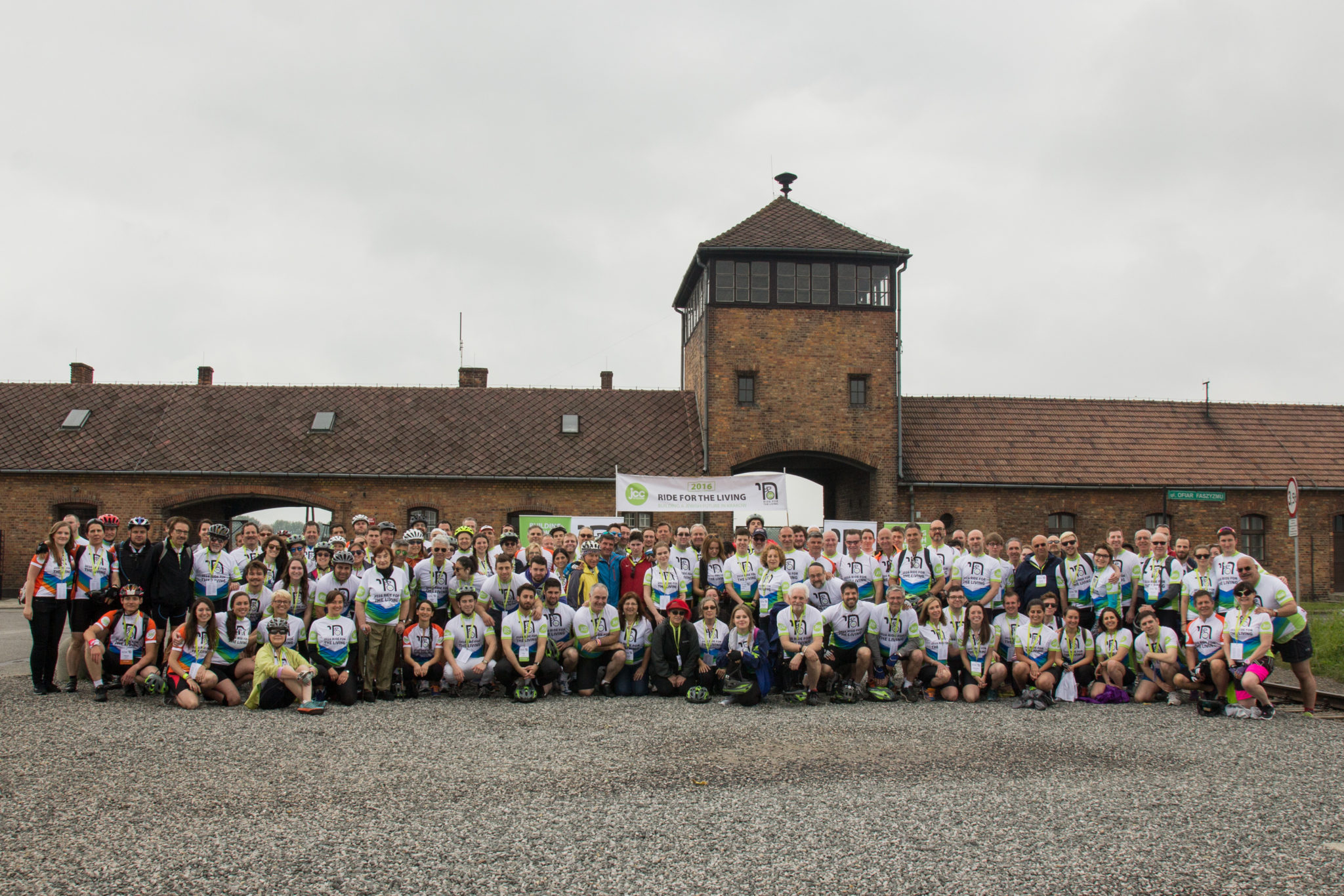 “A journey of a thousand miles begins with a single step,” goes a Chinese adage. Or with the turn of a bicycle pedal, as folks over at the Jewish Community Center of Krakow might say. It is unlikely that, when JCC member Robert Desmond got on his bicycle in October 2013 to ride 1,350 miles visiting WWII sites of liberation from London to Auschwitz, he thought it would mark the beginning of a new tradition. But his trip inspired Ride For The Living, one of the biggest fundraising events organized by JCC Krakow, under the patronage of Chief Rabbi of Poland Michael Schudrich.

During the Ride participants cycle 55 miles from Auschwitz-Birkenau to JCC Krakow to honor victims of the Holocaust and to celebrate the survival and renewal of Jewish life in Poland. In the words of Rabbi Avi Baumol, the Rabbinic Representative of the Chief Rabbi of Poland in Krakow, “Auschwitz cannot be and never was the end of the Jewish story in Poland. It must, like all other times in Jewish history, lead us back to Krakow, back to life, towards a Jewish future.”

Now in its fourth year, Ride For The Living has proved a great success as a fundraiser that significantly contributes to the JCC’s efforts to build a better Jewish future in Krakow. Donations from the inaugural ride in 2014, which had just 15 participants, made it possible to have a JCC Krakow Holocaust Survivors’ Mission to Israel. That trip gave 30 child survivors an opportunity to reunite with families and friends; for most of them it was their first time in Israel. In 2015, the event brought together 85 riders, who raised over $150,000 for new educational programs as well as medical and welfare services for Holocaust survivors in Krakow. And last year, 150 people from 8 different countries joined the Ride – a tenfold increase in participation since its humble beginnings – and helped cover the costs of programming for all generations of JCC members.

Moreover, the event is a powerful recognition of the Jewish people’s determination to persevere despite many challenges, a symbolic testament to the power of will. Says one of the participants, Marc, “The experience moved me beyond what I could have ever expected, and seeing the hundreds of Poles applauding […] at the end of a hard and rigorous ride brought me to tears, tears of joy, of hope, of connection, and promise.”

For some participants the Ride has been a life-changing event. Marcel Zielinski, an 82-year-old Auschwitz-Birkenau survivor who now lives in Montreal, joined the ride in 2015. After the camp’s liberation in 1945, he had traveled the same route on foot as a child in search for his parents and his old home. The war took away the better part of his childhood. By the age of ten Zielinski had already lived through the horrors of the Krakow ghetto, separation from his family, and slave labor at Plaszow and Auschwitz-Birkenau. Those memories made Zielinski’s first visit to Poland in 2007 all the more difficult. “I decided to face my past,” he says, “Seeing the camp itself with the sign ‘Arbeit Macht Frei’… a bone-chilling experience.”

Nevertheless, Zielinski didn’t hesitate to take part in Ride For The Living – twice. He came with his wife, also a Holocaust Survivor, his son, and two granddaughters. “The most important thing for me is to do it… for the people who are going to ride,” especially the young people, Zielinski says. Zielenski will be joining the ride again with his family in 2017.

Though the Ride starts in a place that is so closely associated with Jewish death and destruction, it ends with music, art, and a joyous celebration at JCC Krakow with the Jewish community.

For the 2017 edition of the Ride For The Living, JCC Krakow has partnered with the Jewish Culture Festival. The Festival is the largest Jewish festival in Europe. The Ride, which will take place from June 22nd to June 25th, will lead directly into the Jewish Culture Festival, which will last from June 24th to July 2nd. JCC Krakow has worked closely with the festival for the last nine years, hosting cooking classes, lectures, activities for kids, book release parties, and the largest Shabbat dinner in Poland for over 500 guests. This year, as part of the partnership, Ride For The Living participants will enjoy discounted tickets for the festival’s events.

The festival was first organized 27 years by two non-Jewish Poles, Janusz Makuch and Krzysztof Gierat, who wanted to reinstate Jewish culture in Poland’s collective memory. A small-scale local initiative has since blossomed into a visionary project that attracts upwards of 30,000 guests from all over the world every year and offers approximately 300 different events. For nine days in the early summer Krakow’s Jewish district, Kazimierz, hosts a smorgasbord of workshops, exhibitions, tours, readings, art projects, performances, and concerts that demonstrate the richness of contemporary Jewish culture. According to Jonathan Ornstein, Executive Director of JCC Krakow, “The interesting thing is that [the festival] allows people to express the view that Jewish culture is a great thing, and to say that Jews themselves now feel secure enough to express that, in a place with a very difficult history. This is the biggest festival of the year, and we are as connected to the festival as we can be.”

The pinnacle event of every edition of the Jewish Culture Festival is Szalom na Szerokiej. This massive, seven-hour long open-air concert in the heart of Kazimierz features diverse styles and genres of Jewish music. Kazimierz, Europe’s best-preserved Jewish quarter and a long-standing symbol of Jewish absence, truly comes alive during the festival. As the festival’s director, Janusz Makuch, puts it, “Life is what interests us — its astonishing capacity for rebirth and flourishing anew. The Festival is an unending celebration of Jewish life.”

Perhaps this optimism and eagerness to look ahead – the attitudes also inherent in Ride For The Living – is what attracts so many volunteers to the festival. The Machers (Yiddish for “someone who is very active and gets things done”), as the festival’s volunteers are called, do so much more than simply run errands and assist at the festival’s events. Throughout the year they engage in a variety of activities, which enhance and enrich their understanding of Jewish culture. They lead their own projects as well – like, for instance, the Machers for Seniors initiative, which fosters experience exchange between generations.

Together, JCC Krakow’s Ride For The Living and the Jewish Culture Festival help develop and expose the context of today’s Polish Jewish life. This is indeed a journey of a thousand miles, and step by step it moves all of us forward.