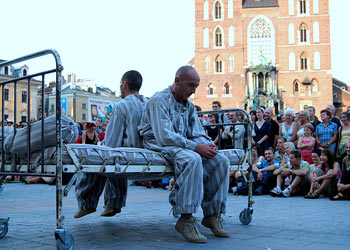 Once again, the International Street Theatre Festival brings the spectacle and delight of theatre to Krakow’s streets and squares. Starting this afternoon and going on through Sunday, the festival features four theatre companies from Poland and 15 from abroad performing several dozen plays in various locations around the city.

This year’s theme, “Child, Children, Childhood”, aims to delight both young and old. Several special interactive performances for children will take place in the Mały Rynek, while adults can catch the remainder of the performances in the Market Square, Plac Wolnica in Kazimierz, the square in front of the train station, in the courtyard at ul. Karmelicka 27 and in the Bagatela Theatre.

For a full schedule of the shows, see the festival’s official website.