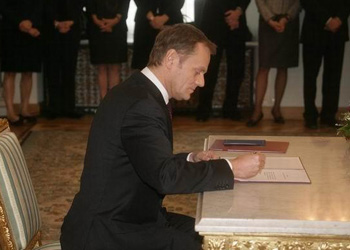 “Spend like there is no tomorrow” has been the underlying principle of a variety of governments across the political spectrum to offset the effects of the global economic slowdown. At a time when most Western countries have been trying to resuscitate their economies by massive government spending, the Polish government has, overall, been doing the exact opposite, trying to find space for reductions in its current budget – this, despite criticisms from the opposition. On 23 June, the Polish government announced its intention to increase the budget deficit to last year’s level of 27 billion złoty, due to falling revenue. Nevertheless, throughout the year, it has consistently done a lot to control spending, and has done so in the face of enormous pressures. Has the Tusk cabinet been out of touch with the times?

Much has been said about the devastating toll that the financial and economic crisis is taking on the livelihood of nations. Over the last year, countries as different as Latvia and Iceland have experienced drastic contractions, leading the latter to the verge of bankruptcy (averted only by international help). The response of most developed countries has been to launch massive spending programs. In a series of unprecedented moves, a host of governments have, in effect, nationalized parts of their financial sectors, and made others’ (like the auto industry’s) existence possible by government assistance. Perhaps, after months of spending, it is worth assessing if the measures adopted have worked.

According to both government data and the projections of Eurostat (the Statistical Office of the European Communities), Poland will be one of only two countries (the other being Cyprus) in the European Union with positive economic growth. While the growth is modest – about half a percentage point in the first quarter of this year (as measured against the last quarter of 2008) and, according to revised official projections, only 0.2 percent yearly – it contrasts sharply with the outlooks for neighbouring economies. In the first quarter of this year, Germany’s economy shrank by almost four percent, according to Eurostat (and that was on top of last year’s recession), while the losses of both Slovakia and Lithuania can be measured in double digits. Across the Atlantic, the economic situation is not much better; the US unemployment rate continues to rise, nearing 10 percent, which, especially by American standards, is extremely high, considering that the economy is still in recession in spite of European-style government engineering. Only a fraction of the so-called stimulus package has been spent, and the way it is being spent raises, at best, serious doubts.

It turns out that for all of its gloomy past, proverbial bureaucracy and endemic corruption, the Polish economy is weathering the economic storms with surprising resilience. To be sure, Poland is, and will continue to be, a country of rather moderate incomes; but at least since 2008 is has been, all things considered, a beacon of stability in the region. Have Poles suddenly discovered a formula for economic success?
Well, perhaps not quite.

For one, the drastic slowdown in the Baltic States followed a period of equally impressive expansion, which Poland had not experienced to the same extent. Secondly, the drop in Slovakia’s GDP results partly from the faltering car industry. Slovakia, admittedly, became too heavily dependent on foreign investment, but this should not make us dismiss the questions (raised often at the time) why the investment had not come to Poland in the first place. It may be that in those particular cases the investments did not prove successful, but Poland is still in need of other projects to sustain its growth. In short, Poland is not a business-friendly country in terms of how the state facilitates the operation of enterprises in the area of taxes and regulation.

From the beginning of the transition of the command economy to a market-based one, the Poles were told that they should emulate the more advanced economies, yet paradoxically, some of Poland’s shortcomings in following the newest business trends have contributed to its relative stability. Linking mortgages to the income of the applicant, while bothersome for consumers, insulated the economy from the toxic mortgage problem, which devastated the more advanced economies. The framework did not prevent the frenzy associated with the housing bubble to cause some credit and currency problems in Poland, but this again has to be put down to foreign capital mistakenly treating the region as a whole, and not to Poland-specific problems. In short, good old-fashioned banking practices (occasionally ridiculed in the past by more “developed” thrill-seekers) have demonstrated their timeless application.

So has, it seems, common sense and moderation shown by the Tusk government. While political opponents are calling for more spending, the prime minister has exercised fiscal restraint and exhibited an aversion to heavy-handed intervention at taxpayers’ expense. Earlier this year he went so far as to demand departmental cuts from all his ministers not to further exceed the deficit. But credit should also be given to Poland’s fortunate international position. While historically Poland has frequently faced unfavourable circumstances, it looks like this time around the external forces conspired to help the government. EU funding and the organization of the 2012 European Championship are a case in point. Poland’s own resources may be scarce, but they are supplemented by European ones.

The international environment, incidentally, is changing. A few months ago the British print media raised a much belated outcry about their government’s officials “bankrupting” the country. The results of the elections to the European Parliament indicate uneasiness on the part of the general European public across the continent about how centre-left governments have handled the economy and a concern for the level of spending. This shift to the right shows that, perhaps, the Poles have had it right from the very beginning. When in the second half of 2008 most of Europe turned its back on laissez-faire economics, Poland, ironically, did not move along the lines of expanding “Big Brother” government.

All this is not to say that Poland has already created a crisis-proof economy that is better suited for modern times than other European countries. That is not the case. We may have avoided the excesses of post-modern, service-based economies, but we have not yet laid the groundwork for being a European “tiger”. Once the economic crisis passes, all of our old shortcomings will again be plainly visible, since a variety of public services in Poland are in dire need of reform. If we do not do it right now, the next time around we may not be so lucky.