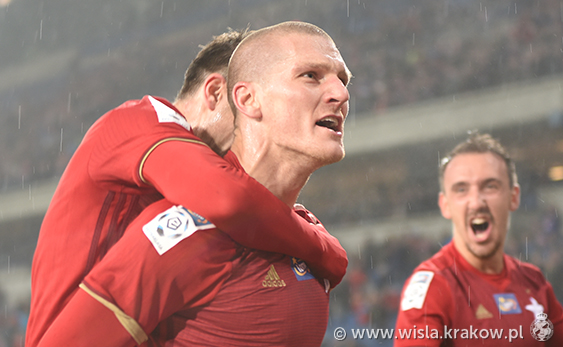 Cracovia welcomed Arka Gdynia, a seaside-based team that returned to Ekstraklasa after promoting from Division Two. Despite being tying in their last three home games, the Cracovia Pasy had not actually won at home since October. A long frustrating period for the fans hoping to see it end against Arka.

And things went the right way after ten minutes only, when Marek Budziński opened the score before seeing his goal disallowed by the referee. The Cracovia captain triggered a stunning long distance shoot that bounced behind the goal line after hitting the crossbar. But too far from the action, the referee denied the Cracovia captain from scoring a world-class goal against his former club. Goalkeeper Sandomierski stopped the visitors from scoring a few minutes later, but he couldn’t stop them from opening the score right before the break.

Very quiet in first half, Krzysztof Piątek created the first chance of the second half. But the equalizer came ten minutes later via Jaroslav Mihalík, sending home a great cross from Deleu. The 22-year-old Slovak scored his first goal for Cracovia after joining Poland in the winter break. Followed a series of goal chances for both sides, Cracovia was getting really close to scoring a winner but was unlucky to see another goal disallowed by the referee – this time fairly, due to a clear offside.

The score then remained unchanged, a frustrating 1-1 draw for Cracovia given their first disallowed goal. Coach Jacek Zielinski men keep on struggling to be efficient and to win at home. They booked a fourth consecutive draw on the same score: 1-1. With only six games left before the Playoffs, the Top Eight is slowly drifting out of reach for Cracovia. The Pasy will need to book points if they want to compete with the Big Fish in the Playoffs, rather than fighting against relegation.

Next on their plate: another home game against Zagłębie Lubin on Monday, March 13th.

The first half didn’t offer much excitement to the fans, despite Wisła being the dominating team. Well organized, the visitors created the only goal chances of the half via Paweł Brożek, Tomasz Cywka, and Pol Llonch, who hit the crossbar right before the break.

Piast tried to play more offensively after the break, creating their first chance of the game. But Wisła deservedly scored at the 70th via their Czech striker Zdenek Ondrášek, shortly after coming up the bench. A great finish between the Piast goalkeeper’s legs to score his third of the season.

But this is when Wisła started to lose focus and let Piast come back in the game. First was a poor back pass that could have offered them the equalizer. But ten minutes to the end, their poor defending allowed Badía to equalize despite being surrounded by seven Wisła players.

Ondrášek got close to scoring a second, but Wisła had to wait the extra time to finally seal their win via Petar Brlek. The Croatian youngster finished a great collective action with a strong header at the 92nd, offering a deserved win to his side.

A deserved win for Wisła looking at their performance, but Ramírez’s team got very close to wasting two points as they repeated the same mistakes However, this time luck and efficiency was on their side with this last/second goal. A key win to pursuing their strong series in 2017 and before the big game in the Capital City on Sunday, March 12th against Legia Warszawa: for the “POLISH CLASSIC”!