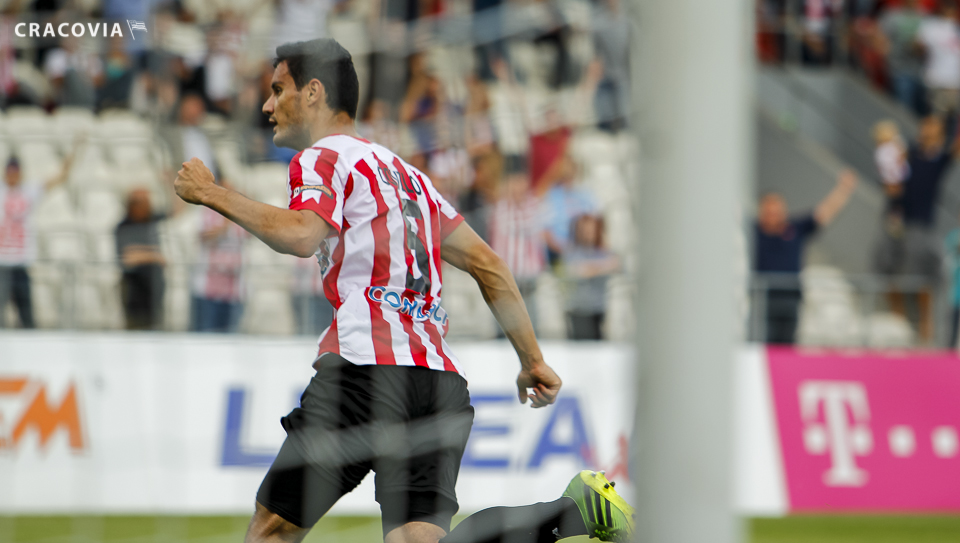 The Cracovia Pasy traveled to Chorzów city to meet Ruch (most titled team, 14x Polish Champions), a very complicated away game. But the away fans were banned from this trip for security reasons (strong rivalry). However, Ruch players could rely on… Wisła fans’ support in their stands.

The home fans didn’t really get to warm up in the winter cold night, due to a closed first half with a few offensive plays only. The game opened up after the break with more goal chances from both sides, but Cracovia was the emerging team, sealing their win 3 minutes from the end via Krzysztof Piątek, who finished a great collective action to secure an important win for his team. A great reward for Cracovia’s serious performance.

Wisła Krakow welcomed Korona Kielce, but all eyes were on the new Spanish coach Kiko Ramirez. This game was also Arek Glowacki’s 330th game for Wisła, a record for the long-serving captain.

It couldn’t have started better, with a terrific goal from Patryk Małecki after 12 minutes, a world-class volley from outside the box and a serious contender for the “Goal of the Season” title. However, Wisła didn’t create any more chances, while the visitors reacted with several goal attempts and kept the home goalkeeper Zaluska busy. Wisła opened up in the second half with more offensive plays, while Korona kept on failing to score their chances. 15 minutes from the end, a generous penalty was granted to Wisła and converted – in 2 steps – by the home top scorer Pawel Brożek.

A secured 2-0 win for Wisła, but a score not reflecting the game, since Korona played really well but missed (too) many goal chances.

Pogoń Szczecin was next on Cracovia’s menu. For their first home game they welcomed a though opponent, strongly settled in the Top-8.

The game was overall balanced but closed, with only a few chances due to two well organized teams not leaving much space to each other. The key facts occurred around halftime: five minutes before the break, Cracovia Serbian midfielder Čovilo and Pogoń’s defender Fojut bumped in a terrible clash of heads, leaving Fojut with a bleeding scalp and Čovilo with a swollen right eye area. Both players had to leave the field and head to the hospital.

Nevertheless, the Pasy managed to open the score shortly after. Krzysztof Piątek didn’t miss the opportunity to finish a nice action, scoring his second in two games. However, no time to enjoy as the visitors equalized on the very first action of the second half. Later, despite Cracovia pushing for a winner, the game didn’t open up and the score remained unchanged. A fair draw that reflects the game.

Wisła back to reality

Wisła took a three-hour trip to the beautiful city of Wrocław to meet Śląsk, a team they haven’t been able to beat in their last four meetings.

Wisła controlled the first half, playing with attitude and an offensive mindset. They were close to opening the score and were also denied a clear penalty. There was a similar trend after the break, with even more goal chances for the visitors, who failed to be efficient. And what happened was what usually happens when one misses too many goals: Śląsk scored on their third action of the game, 15 minutes from the end. Wisła was never able to react to this late goal and conceded their 10th defeat of the season.

A frustrating scenario, since they could have scored three to four goals. And with only 1 win in their last 11 away games, they confirmed how much they have been struggling with booking any points away.

The Pasy traveled 600 km to the seaside to challenge Lechia Gdańsk. The current Ekstraklasa leader only lost one home game this season, scoring two goals in average. A trend and a status that they confirmed, as they won the game with 4-2. However, this severe score did not reflect Cracovia’s strong performance against the best playing team in Poland. They managed to shake the League Leader with repeated offensive actions.

Overall the challenge was tough: Cracovia bumped against a well-oiled machine with more experienced players. Adding that to individual mistakes and the overall lack of efficiency made the difference. But with six goals and ten shots on target, it was one of the most spectacular game of the season. Adding that Cracovia serial scorer Krzysztof Piątek scored the two goals for his side – his fourth goal in the last three games, definitely the man of the moment.

Wisła still the boss at home

Wisła welcomed Jagiellonia Białystok, currently second in the League with the second best attack and defense. A tough game ahead, but the opportunity to prove that they can compete with the best.

And they did: Wisła was simply on fire as Coach Kiko Ramirez’s men looked unleashed, not leaving any space to their opponents: with high pressure, quick play, and offensive-minded spirit, they mastered the game. Paweł Brożek, Patryk Małecki, and Rafal Boguski were the scorers for Wisła, but more than scoring a goal, they showed cohesion and combined with each other like rarely seen before.

On a negative note, there were silly red card for Ivan González and a goal conceded at the last minute of the game. But not enough to hide the great win, which brings Wisła back in the Top Eight.