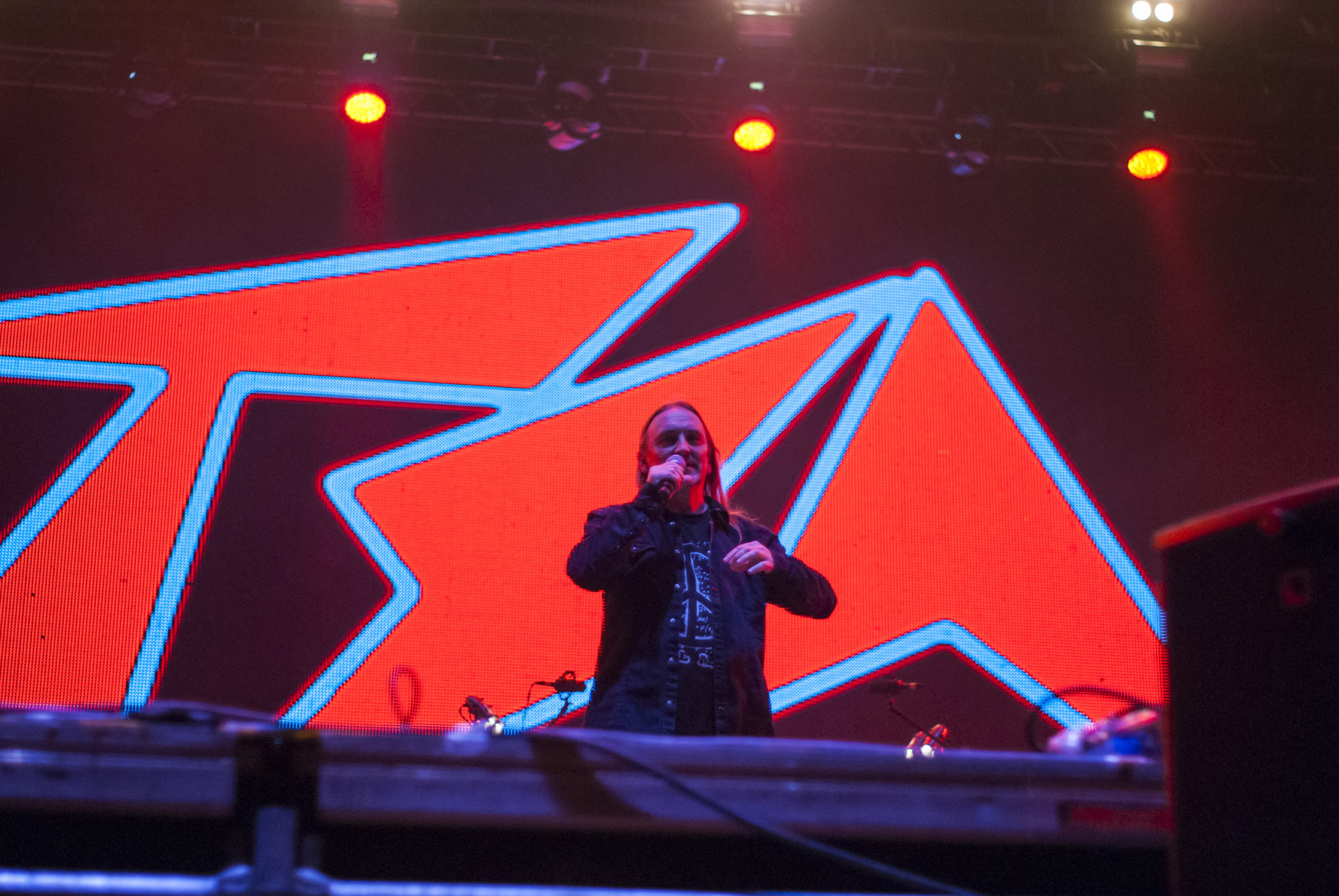 If you were a teenager in Poland in the 1980s, and you were into hard rock and metal, then you LOVED TSA. During a time when censorship was on the rise, in the era leading up to martial law, TSA were Poland’s answer to Iron Maiden, or perhaps the AC/DC from Opole, and their legendary 1982 live album was recorded in Krakow.

They disbanded and reformed a half dozen times (at least) since then, and singer Marek Piekarczyk (who joined in ’81) has become a bit of a star in his own right as a solo artist and regular fixture on Polish television.

While it may not be overtly political in nature, nonetheless the music of TSA is the sound of revolution in Poland in the 1980s. And as you can see in this video – taken at their last Kwadrat show in 2014 – they are still an exciting live act and no one cares that it’s been over a decade since they’ve created any new music.

Krakow’s own VIRGIN SNATCH (yeah, I know…), although only having existed since 2001, have become quite well known as well for their brand of kinetic (is there any other kind?) thrash metal. Ex-members have included musicians from such Polish legends as Behemoth and Acid Drinkers, and one even went on to play with German legends Scorpions. Unfortunate name, though, eh?

The story of this 30 year old ‘Mormon girl’s’ rise to international stardom seems so unlikely that, if it were a film script, Hollywood would have rejected it as being too implausible. It is both the story of an artist and their management utilizing the latest technology and marketing techniques (a YouTube channel parlayed into appearances on TV talent and talk shows, etc.) to create a buzz and the oldest story in the book: the talented “kid” with a gimmick.

Stirling’s ‘gimmick’ is that she plays the violin while dancing like a ballerina. And she does both REALLY well, as evidenced by her plethora of Gold and Platinum selling albums and sold out concert tours all over the world, including Poland. Throw in a best selling autobiography, her religious upbringing, and her bouts with anorexia, and she’s unusual enough to be intriguingly “quirky” and also eminently marketable.

But she’s also musically adventurous enough to collaborate with everyone from hip hop artists to a capella groups to dub step producers on both her own songs and a wide range of covers, from Lady Gaga, Leonard Cohen, and Michael Jackson to Journey and (I’m not joking) Skynyrd’s “Freebird”.

Her live show is an enormous production, with lots of smoke and pyro and costume changes, but (the only real negative, to my mind) just two musicians backing her, and a lot of mostly pre-programmed music.

But don’t make the mistake of thinking that means she is without talent and creativity. She achieves that rare balance of being a true musician while also being visually appealing enough to stage a big arena show. Her touch on the violin is impressive and her musical instincts are excellent. Check out her version of Evanescence’ “My Immortal”, and listen to the purity of her tone as well as the melodic interpretation, and you’ll begin to understand why she appeals to music geeks as well as the mainstream audience.

Despite the Indiana Jones-derived moniker, Lao Che are another prime example of the Polish knack for mixing stylistic influences. Everything from ska-punk to ambient electronica to jazz and folk is synthesized into something that can truly be called “alternative.” They’re well known for ambitious concept albums, the most famous of which, Powstanie Warzawskie, is based on the story of the Warsaw Uprising. Their most recent album, 2015’s Dzieciom received some of the best reviews of their career, and explores the idea of children’s fairytales as seen through adult eyes. Despite such serious subject matter, they’re well known for creating a great party atmosphere live, as this concert film illustrates.

Although NEGURA BUNGET is considered black metal, the dynamic range and technique displayed by this Romanian band is far beyond most of the genre. There are strong elements of the folk music of their homeland, as well as pastoral and ambient sections of their often epic compositions that recall Pink Floyd or Porcupine Tree. In the small confines of Piękny Pies, they will undoubtedly be seriously intense!

Finland’s AXEGRESSOR are more of a typical thrash metal outfit, with lots of angst and energy, but a bit bereft in the melodic department. But what they may lack in hummable tunes, they make up for in… um… axegression?

EDYTA GEPPERT is one of Poland’s best loved vocalists, who between 1984 and 2014 won the Opole song contest an impressive four times. As such, she is best known as a singer of ballads and that uniquely Polish genre known as “sung poetry”, but her recorded output has been surprisingly diverse, touching on everything from hard rock to country to even hip hop. At 63, her command of the stage, as you can see in this clip, is impressive.

Did you know that one of the world’s biggest international festivals of artists specializing in sea shanties is right here in landlocked Krakow? Indeed, every year at this time, venues all over the city – and I mean every kind of venue, from Radio Krakow to the charming Stary Port pub to the Kijów theater to the ICE Center offer a wide variety of groups from all over the world. From shows aimed at children to bawdy sailor songs, there’s something for everyone at prices that start at the always popular “free.”

There’s a lot more to sea shanties than “What Do You Do with a Drunken Sailor”, and here are a bunch of really good opportunities to explore the genre.

The link above has all the details.