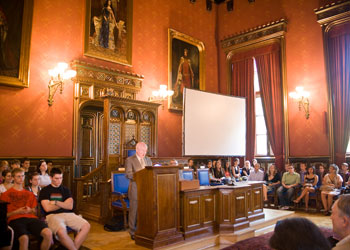 The assembly hall of the Jagiellonian University‘s main building, Collegium Novum, was the setting of the opening ceremony for the summer session of the School of Polish Language and Culture today. The large hall was packed with mostly students on this hot July morning, while university officials waited for the arrival of the guest of honour, Prof. dr hab Andrzej Mania.

The first to speak was the programme’s new director, Prof. Robert Dębski, who welcomed the students, many of whom had just arrived in Krakow for the first time. The course welcomes over 450 students each summer, from 46 different countries.

Prof. Dębski’s introduction was followed by the inaugural lecture, which has traditionally been delivered by a distinguished guest of the university. This year, the honour fell to Prof. Mania, an expert in international relations and American history, who has held visiting positions in several prestigious academic institutions, including Johns Hopkins and the College of London.

In his lecture, titled “Central-Eastern Europe and Poland. Why to be there?”, Prof. Mania stressed above all the need for students to come away with an understanding of Polish society. Students should be able to find similarities between Poland and their home countries – particularly those students from countries in transition: “Being familiar with the situation in Poland will allow you to understand other places [undergoing transformations],” the professor emphasised.

Now in its 40th year, the UJ Summer School of Polish Language and Culture runs for three, four, or six weeks starting 6 July. The programme involves an intensive Polish language course, as well as additional optional courses covering Polish history and culture. However, as Prof. Mania explained, students should benefit as much from their time spent in Krakow outside of the classroom, as from their time in the classroom.

For more information, visit the UJ School of Polish Language and Culture website.