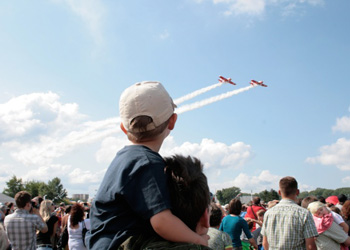 Last weekend, the annual Aviation Picnic air show at the Aviation Museum grounds ended in tragedy when a Cessna 172 crashed. The pilot died on the spot, and one of the passengers died in the hospital the next day due to excessive burns. Two others were injured, one of whom is still in critical condition.

Now, an investigation has concluded that the deadly crash was a result of pilot error. Before take-off, the pilot most likely failed to unblock the control column, also known as the “yoke”, which controls the attitude of the plane, or its orientation with respect to the horizon (also known as pitch and roll).

Edmund Klich, the chairman of the National Commission of Air Accident Investigations, told the PAP press agency this morning that failing to unblock the control column could have caused the accident. “It’s the first thing the pilot should have done,” he stated.

Mr. Klich expressed surprise that the control column was improperly blocked despite the plane’s flight earlier that day. But the blockade did not secure the entire column, which allowed the pilot to take off. “Most likely in the final stage of the flight the pilot, attempting to use the column to increase his speed, was unable to do so, as the blockade was set up,” explained Mr. Klich.

The investigative team concluded that the combination of the blockade, a short take-off strip and the plane’s heavy load led to the accident.