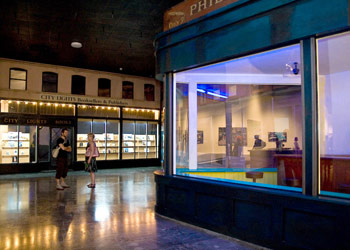 The event started off on a multi-national note. As the lobby of the main building of the National Museum in Krakow progressively filled up almost to the point of bursting, a din of Polish and American-accented English could be heard. The July heat, combined with the visitors’ semiformal dress, left many using their invitations as makeshift fans, adding to the multilingual cacophony. But as the opening notes of the American National Anthem rang out from the choir, all fell quiet. Some sang along or mouthed the words. As the last trace of “and the home of the brave” faded, a performance of the Polish National Anthem began, with even more voices joining the chorus, to reflect the true nature of the event.

This was the opening of the newest exhibition at the National, “American Dream” (“Amerykański sen”), which took place on the evening of 1 July. Earlier that day, at a press conference in the museum, the Public Affairs Officer of the General Consulate in Krakow, Susan Parker-Burns, revealed that this project is “a realisation of an idea from one and a half years ago.” In part, it is a celebration of the 90th anniversary of Polish-American diplomatic relations. It also conveniently takes place right before American Independence Day. But mostly it is an examination of what exactly the American Dream means to an outsider.

While some might decry the concept of the American Dream as an overused cliché, it is precisely this stereotype that the exhibition aims to explore. And more specifically, it aims to “show the idea of America in the Polish imagination, especially in the older generation growing up in communism,” according to Ms. Parker-Burns. Those who lived in the United States in the 1950s-80s, or even had a chance to visit, know that the country was much more than Coca-Cola, Elvis and Cadillacs. But behind the Iron Curtain, it was precisely those images that came to represent America, forming a picture as vague and incomplete as if in a dream. Most importantly, however, the American Dream also became synonymous with possibilities – the open road, the carefree freedom of Woodstock – all of which are represented in the exhibition.

The centrepiece of the show comes from the collection of one man, Mr. Louis K. Meisel, whose roots stretch back to Krakow (Rabbi Meisel, who has a street in Kazimierz named after him, is a relative). Mr. Meisel is an avid art collector and coined the term “Photorealism”, which is the type of painting represented by the collection. Artists include what Meisel refers to as “THE Photorealists”, mainly born in the 1930s, such as Robert Bechtle, Charles Bell, Robert Cottingham, Richard Estes, Audrey Flack, Ralph Goings, Ron Kleemann, David Parrish and several others.

“Photorealists painted what Poles thought of as the American Dream: Harley Davidson, theatre marquees, diners, apples, city scenes, [etc.],” Mr. Meisel explained. It is the first time these works have been exhibited in Poland, as well as the first time Mr. Meisel has ever lent his entire Photorealism collection – something he did because “Krakow and Poland are important to [him].”

Another icon of the American Dream – Coca-Cola – is represented by a separate exhibition on the first floor, titled “Art or Advertisement”, and comprised of ads from the 1950s-80s from its museum in Atlanta. An ongoing exhibition of WeeGee’s New York City photographs, on the second floor, is also part of the event.

The “American Dream” exhibition is just one part of a larger programme titled “Ameryka, Ameryka”, which includes five other exhibitions at the National as well as accompanying concerts, films, and exhibitions at other galleries. Ms. Zofia Gołubiew, the director of the National Museum, called it “the biggest, widest-ranging exhibition of this type in Poland.”

The exhibition, jointly organised by the National Museum, the American Consulate in Krakow and the Institute for American Studies at the Jagiellonian University, opens to the public today and will be on display until 4 October of this year.