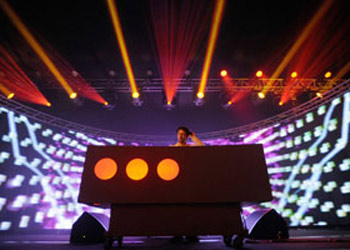 Taking up a plot of land on the Błonia Common, the inverted domes of Selector Festival recalled the hyperbolic paraboloids of the 1958 Iannis Xenakis Philips Pavilion – and it wouldn’t be a stretch to say that you could find a few poèmes électroniques inside as well. Grime prince Dizzee Rascal’s live set was the first to blow the roof off the larger Cyan stage, with his punchy beats and deliciously deep bass. Dizzee started off the night with his net-notorious version of The Ting Tings’ “That’s Not my Name”, a cover which reads like a lesson in urban vocab (“They call me blud/ They call be rudeboi/ They call me oi/ They call me mate/That’s not my name”). Ending his set with his summer smash hit “Bonkers”, Dizzee left us all with smiles plastered across our faces in anticipation of the next two days’ events.

Fischerspooner was another highlight, though their contribution was much more of a performance than pure concert. Casey Spooner hopped between futuristic wardrobes, and the space-ballet feel was completed with four dancers leaping between huge mirrored panels. Franz Ferdinand had all the girls screaming, CSS exuded positive energy in their polka-dot spandex jumpsuits, and Röyksopp managed to, even while seeming somewhat inebriated, pull off a top notch set. Anneli Drecker’s haunting vocals and owl outfit must have had something to do with it. Orbital pumped out their memorable hits from inside a fortress of synthesizers, and had Saturday night’s crowd completely hypnotized.

The smaller Magenta stage proved to be a delightful smorgasbord of talent. It must take no small amount of passion to run Ed Banger records (home to superstars Justice), so it was no surprise that Busy P had one of the most eclectic but simultaneously crowd-pleasing sets of the weekend. His selection ran the whole gamut of blog house and French electro classics, from Daft Punk to Sebastian Tellier, through to indie darlings such as Animal Collective and Vampire Weekend. Rising star Deadmau5 is most famous for his giant lit-up mouse mask, though to call this Canadian DJ a man of gimmicks couldn’t be further from the truth. There’s nothing traditional about the way Deadmau5 handles his music, as he controls every scintilla of sound that leaves his laptop, using effects, samplers, and a geeky monome controller. It’s no understatement to say that Deadmau5 is taking the concept of DJing to the next level.

Luckily, there were few lows at Selector. One of them was that the AlterKart was the only form of payment accepted at all vendors and the system was riddled with problematic card readers and long queues. The fenced-off beer area was tragically undersized and simply walking in and out was a practice in herding human sardines. Toi-Tois were abundant but seating was sparse, and concert-goers were so exhausted they were sitting on the rain-sodden ground, or worse, grabbing a seat in the Camel-sponsored “chill-out” room where the age-old attempt at equating smoking with being cool and sexy was surprisingly alive and well. The company’s stocks must have shot up as quickly as the content of certain boys’ trousers, as the Camel ladies slinked about in their Grecian micro-outfits, pouting – though curiously not actually smoking. Because they’re not actually promoting smoking here – they’re advocating chilling out! On the artistic front, only a few minutes had passed into Digitalism’s main stage DJ set when it was was quickly made obvious that they couldn’t mix two records together. As producers, they have released some great material (remember “Pogo”? “Digitalism in Cairo”?) but clearly they skipped a few lessons at DJ school. In the end however, we can only hope that the organizers of Selector learned from these few negative blips, and I’m sure we can look forward to an even bigger and better festival next year.