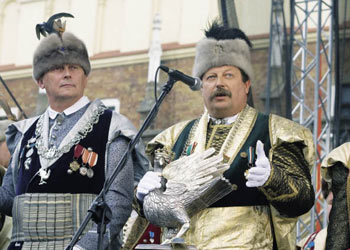 It was ten o’ clock on what was a rather drizzly Saturday morning. Flower sellers were tending their stalls and tourists were beginning to emerge from their hotels after a leisurely breakfast. Yet unbeknownst to the early bird shoppers, something strange was afoot. In a secluded park behind the railway station, a bizarre assembly of men had gathered. Each was sporting red leather boots, and an air of conspiracy was afloat. Guns were being passed from hand to hand and drums were poised for a bashing. But before you could say “mighty moustaches”, they were off.

Volleys of gunshots pierced the skies, pigeons fled in terror and flabbergasted shoppers clasped their ears in shock. The commotion could mean only one thing: a new king was in town.

After a solemn mass in St. Mary‘s, the stout new monarch was enthroned in an elaborate ceremony on the Market Square. Many more shots were fired, and many more pigeons were terrorized. And just for an added dash of fantasy, a troop of men descended out of the skies (sadly not wearing 17th century costumes), delighting the townsfolk with their expert twists and twirls. Having wrapped up their parachutes, they too approached the king and were duly greeted with great flourish.

But who exactly were these curious fellows? And why had a giant silver cockerel been bestowed upon the new king?

To answer these questions, we need to jump into our time machine and return to an age when carrying a sabre was a must for a man of rank, and Krakow was still the sovereign capital.

Back in the Middle Ages, Krakow counted amongst the most prosperous cities of Europe. And of course, it was here that the king resided. Owing to the rather flat whereabouts, a sophisticated system of defence was eventually constructed. In return for the many privileges granted to the wealthy guilds, it fell to the townsfolk to defend the city. Today, only four towers remain from the old city walls, but once there were forty-seven. Each tower belonged to a different guild. Hence you had the Furriers’ Tower, the Carpenters’ Tower, the Haberdashers’ Tower, the Sword-makers’ Tower – every trade under the Cracovian sun.

Of course, it was all very well assigning these men the duty of defending the city. But it wasn’t much use if they couldn’t actually inflict some grievous bodily harm, or better still, entirely remove the enemy from this vale of tears. Hence the canny kings heaped great honour on the finest marksmen.

Every year, a shooting contest was held, with members of the various guilds – the Fowler Brotherhood – taking aim at a wooden cockerel. Before muskets were invented, crossbows were the weapons of choice. Whoever pierced the heart of the bird was declared Fowler King. The incentives to win were not to be sniffed at. A boon for the allegedly penny-pinching Cracovians was that the king granted the winning marksman exemption from taxes for an entire year. The icing on the cake was the bestowal of a fanciful silver cockerel. This was cast in the sixteenth century and the original has endured until today. Legend has it that King Sigismund Augustus himself commissioned the cockerel.

Clothes fit for a King

To tap into the secrets of the Fowler Brotherhood, AD 2009, I went to meet a man who’s continuing the traditions in the best possible manner. When Jerzy Turbasa was crowned king in 2007, he became the third member of his family to do so, a first in the history of the association.

Jerzy Turbasa’s family business tallies perfectly with the traditions of the Brotherhood. His name will already be familiar to many Cracovians, as J. Turbasa is by reputation Poland’s finest tailor. The firm has dressed presidents, Oscar winners, professors, composers and cosmopolitan gents of all sorts.

Not surprisingly, Jerzy Turbasa is a decidedly dapper fellow. On the day he welcomes me into his atelier, he is sporting a dolphin blue pin-stripe suit, set off by a pair of English brogues. Brimming with charm and enthusiasm, he punctuates his points with sweeping gestures – he’s the epitome of old-fashioned Polish goscinność (hospitality).

“Being the Fowler King is a great privilege,” he affirms, describing the many ceremonial duties and traditions of the monarch. “But as the author Fredro once wrote, ‘One must keep a sense of proportion, my good sir’,” he adds with a twinkle. “The Fowler King is of course not a real monarch!”

Still, like any sovereign, the cockerel king is required to be present at virtually every municipal ceremony of note. You’ll see the Brotherhood marching in Krakow on all national processions. They are also regularly invited to far-flung shores, from Australia to Mexico, besides yearly trips to the Vatican – Pope John Paul II was an honorary member (as is Lech Wałęsa, and, bizarrely enough, George W. Bush).

In recent times the Brotherhood has sponsored a string of statues, including one in Rome of the Nobel Prize-winning novelist, Henryk Sienkiewicz. And here in Krakow, they backed the Józef Piłsudski monument, and that of Pope John Paul II in the historic Shooting Park (Park Strzelecki). Turbasa, a qualified architect himself, personally designed the latter, whilst the sculpture was created by Professor Czesław Dzwigaj, who succeeded Turbasa as king in 2008.

“I was very happy when I became the Fowler King,” Turbasa says. “However, when I passed on the silver fowl to Professor Dzwigaj, I was also happy, because I became a free man again,” he smiles. “It’s a great privilege but also a great duty.”

Although Turbasa is a tailor, you don’t have to be an artisan to be a member of the Brotherhood these days. Still, it’s pretty tricky to become a member. A council of elders approves prospective newcomers, who invariably come from old mercantile families. You must sponsor the elaborate dress out of your own pocket.

Of course, today’s Fowler fellows are no longer required to repulse enemies from the city gates, but the tradition of shooting is very much alive. Indeed, as Jerzy Turbasa reveals, there’s plenty of competition between the men (there are no women fowlers) to be the best shot. They are all members of the same shooting club, and there are weekly training sessions in preparation for the grand showdown.

A quaint aspect of the final open-air tournament is that the gunmen must not only use old-fashioned muskets, but they must also be sporting their full seventeenth century apparel. No nifty Olympic style tracksuits here. God forbid!

As a tailor, the traditional costume is especially close to Mr. Turbasa’s heart, and he has written a lively book about the subject. Such dress is above all associated with the nobility. However, a special dispensation was made to the Cracovian merchants in 1513, allowing the Fowler Brotherhood to sport the costume. The nobility weren’t too happy about this. Indeed, the story goes that one Count Potocki had a merchant severed in two for daring to tie his silk belt in a manner that denoted noble status. Know your place indeed.

Earlier this summer, Minister Radek Sikorski suggested that the entire costume should be resurrected for Polish diplomats at state ceremonies (right up until the war, noblemen still sported the dress at weddings and formal occasions). I asked Mr. Turbasa what he thought about this idea. He paused for a moment, deep in thought:

“When the Fowler Brotherlood are marching in procession, one sees maybe 40 or 50 figures – there is a kind of harmony. However, amongst dinner jackets, tailcoats and suits…. perhaps it would leap out as excessively exotic. The old context has disappeared. As Heraclitus said, ‘one cannot step in the same river twice’.”

Still, thanks to the Fowler fellows – and a handful of other stout groups – the tradition lives on. Come hell or high water, the Brotherhood will be blasting away on their muskets once again next June. A new king will be enthroned, and more pigeons will be given the fright of their lives. All hail the cockerel king!

Celestat, the seat of the Fowler Brotherhood (Bractwo Kurkowe) is today a branch of the Historical Museum of the City of Krakow. It can be found in the Park Strzelecki (Shooting Park), just behind the railway station at ul. Lubicz 16. The treasured sixteenth century silver fowl is amongst the many heirlooms. Open Tuesday to Saturday, 9:30-17:00.