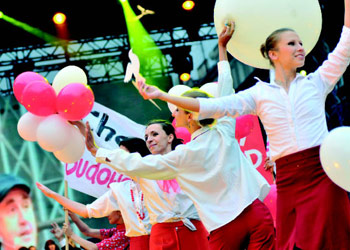 Nowa Huta, Krakow’s most contentious district, is marking its 60th anniversary this year. To celebrate, the city has prepared a number of cultural, educational and sporting events, presenting the history of the region and the fate of the people associated with it.

The district’s place on the Cracovian landscape has been controversial from the start. Nowa Huta, literally “New Steel Works”, was the biggest investment of the Communist Party’s Six Year Plan of Economic Development. Initially, according to the concept of the communist authorities of that time, it was intended as a separate workers’ city, a paragon of socialism, devoid of “backward” sacral buildings. It was established as a counter to “intellectual, bourgeois Krakow”, after the city voted against the communists in the referendum of 1946.

Construction of the district began in 1949, and a mixed population initially inhabited the area, including newcomers from across the country and beyond, among whom were repatriates, soldiers released from Soviet labour camps, or those expelled from their homelands by civil war.

In 1950 the authorities made the decision to join Nowa Huta to Krakow. The district was developing at an extraordinary rate. Later, it would become the scene of many momentous events, including the heroic defence of a wooden cross and the continued struggles to build a church. It was also the setting of explosive riots during the Martial Law era of the early 80s. After 1989, the district saw the collapse of industry, followed by massive layoffs and restructuring.

As the district’s 60th birthday approached, the organization of the anniversary was preceded by heated debates amongst politicians and residents about the meaning of the celebrations, which could be seen as a promotion of communist concepts. There were many discussions as to whether to omit some events, for fear of sending the wrong signal.

“The whole matter started with the main resolution,” said Barbara Turlejska, deputy chairman of the Organizational Committee. “The initiators of the event, the City Council, were meeting and working out the programme of the anniversary. In the meantime, an organizational committee was appointed.” The celebrations take place under the patronage of the City Council and – as she underlined – councillors from Nowa Huta were very active in the organization of the event.

The yearlong programme comprises nearly 500 events. Grażyna Kaczmarek, one of the main organizers of the cultural events, said that Krakow inhabitants took part in creating the programme. “We received a great number of varied suggestions for the jubilee, some of which can be found in the programme. The response showed how many people wanted this celebration,” she added.

The celebrations culminated between 2 and 14 June, launched with an exhibition of photography and posters entitled “From Opposition to Liberty”, and comprising the period of the Round Table Talks in 1989, depicts Poles striving for liberty. Prime Minister Donald Tusk attended the opening of the exhibition.

Another, outdoor exposition titled “My Nowa Huta II” is also noteworthy. It is a complement to “My Nowa Huta”, shown in the local branch of the Krakow Historical Museum, which presents the memories and experiences of 12 witnesses of landmark events in the district. The second part depicts changing customs and social transformations.

Admirers of the arts may also be interested in “The Exposition of the Works of Artists from Nowa Huta”, which displays the output of 60 artists – painters, graphic designers, and sculptors, who lived and created their art in Nowa Huta.

One of the most impressive events thus far was the concert “People from Marble”, a musical performance telling the story of the district by the use of words, pictures and sounds intertwined with the remarks of Nowa Huta inhabitants about contemporary life there. Another spectacle, ironically titled “The Marriage of Krakow with Nowa Huta”, earmarked mainly for a younger audience, was an occasion to listen to legends and songs performed by cabaret artists, hip hop and rock musicians.

Theatre lovers could watch a series of plays in the People’s Theatre organized within the framework of the PostSoc Festival, the winner of which was “Grinder Kurhan’s Brigade”, whereas Kajetan Wolniewicz was awarded for his brilliant part in “A Production of Hamlet in the Village of Mrduša Donja”.

The festival also gave the participants the possibility to become acquainted with the secrets of interesting and significant, but normally not easily accessible places. Under the leadership and care of experienced guides one could visit objects like the Kościelniki Castle, once home to Polish noble families, the mysterious and legendary Wanda Mound, or the Branice Manor, to learn about the oldest history of Nowa Huta.

Among future events, the Mogilski Fair on 4-5 July includes many attractions for children and adults, including an attempt to reconstruct a pre-Slavic village. The Nowa Huta Film Festival is planned for August, during which the most important films about the district and its heroes will be presented to the public.

“We were trying to arrange the programme in such a way as to suit everyone. Every age group should find something of interest,” said Grażyna Kaczmarek.

Apart from getting some attention, the district will benefit in a more physical way. “In July the renovation of the People’s Theatre will begin,” Barbara Turlejska told the Post. The auditorium of the Nowa Huta Cultural Centre and a dance room in the Cyprian Norwid Cultural Centre will also be renovated and some investments will be made in the Łaźnia Nowa Theatre.

Nowadays, the perception of Nowa Huta is much better than even 10 years ago, when it was seen as poor, devastated and rife with unemployment. At present, it is a subject of fascination for tourists, artists and scientists. However, stereotypes concerning the district and a division between inhabitants of Krakow and Nowa Huta still exist.

“The inter-generational mentality needs to be changed. I think that Nowa Huta will be fully assimilated into Krakow in 30 years,” claims Grażyna Kaczmarek. Perhaps such initiatives like the celebration of its 60th anniversary will accelerate this process.