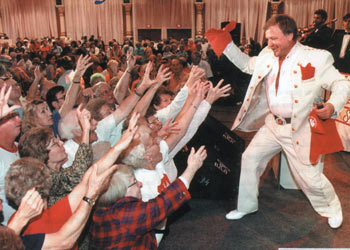 It was like a Russian nesting doll: the international première of an American movie about a Polish immigrant, on show before a mostly Polish audience at June’s 49th Krakow Film Festival.

Wrapping your head around that is just the beginning. The Man Who Would Be Polka King (2009), directed and produced by Americans John Mikulak and Joshua von Brown, takes us on a wild, bi-cultural safari through the astonishing, hilarious, and yet unfinished true tale of Jan Lewan – a Polish tragic hero if ever there was one.

Like his fans, for a good part of the story, we’re hooked: “He’s amazing! How does he do it all?” Well, with a Ponzi scheme, of course – an investment scam built on the trust of the tight-knit Polish-American community (there’s that tragic flaw). The rest of the film details Lewan’s inevitable fall, the surprisingly vicious fallout from his fans, and his ultimate fate: maximum-security prison. Oh, and there’s also a tragic bus accident, a scandal involving the Ms. Pennsylvania pageant, and, of course, all the Polish-American Polka dance parties you could ever want. Or need.

Mikulak and Brown, who also edited the film, manage to tell the story objectively, packing in every nuance even as they pare down the sprawling details, economic jargon, and extensive, thoughtful interviews from all sides. In addition to capturing a lasting portrait of Polish-American culture, they also catch the relevance: the story rings true in the aftermath of the Bernie Madoff scandal and American economic crash. Still, the film is a must-see for the incredible Lewan alone.

Mikulak’s presence at the premiere added a further dimension to the story. At the talkback, he explained that in 2002, Lewan, still at the height of his empire, approached him and asked him to write a rags-to-riches biography. Feeling the story lacked a “compelling hook,” Mikulak turned him down. But a year later, Lewan was back again, this time hinting at his potential imprisonment – at which point Mikulak realized a very special story, perfect for his first documentary, had fallen into his lap. “It was a very classic tale: the rise and fall of a man who had achieved his dreams, and then had them crumble due to excessive greed and hubris,” he explained. “Very Greek.”

Mikulak and Brown hope to secure DVD distribution for the film, which would mean more chances for Cracovians to catch it. Meanwhile, Lewan’s saga is far from over – recently released from prison, the Polka King himself made an appearance at a screening at Brooklyn Heights Cinema, New York.