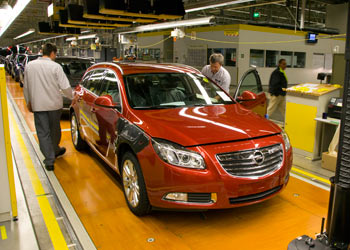 It came as no surprise that General Motors applied for Chapter 11 protection from its creditors and by doing so announced its bankruptcy. Long as the event had been foreseen, the collapse marks the largest industrial fall in history. Similarly to Chrysler and unlike Ford, the giant resorted to state aid to avoid liabilities. In order to receive credit protection the company had to convince the government to accept a restructuring plan, which included the sale of its European units.

The agreement between GM and the German government had to be reached quickly as the details were required before the company could file for Chapter 11. Pressed for time, the German government took under consideration the offers of Fiat, Magna and RHJ International, the latter two being Canadian and Belgian car parts companies. With the federal elections planned for late September, the decision was driven by potential job losses in the German units. Still, the right wing of the government found it not acceptable to save Opel at a cost greater than its bankruptcy costs; the state offered help of €1.5 billion in loans. Yet, politics of a greater scale seemed to be involved as Magna’s financing partner proved to be Russia’s largest savings bank, Sberbank, and the gas pipeline between Germany and Russia came into play. Magna and Sberbank will hold 55 percent of Opel, while GM will keep 35 percent, with the remaining 10 percent falling into the hands of employees. The choice of the Magna and Sberbank consortium proved not only the importance of fast-approaching federal elections and relations with Russia but also, by disregarding GM units in other countries, proved the lack of a pan-European framework to make industry-wide decisions and manage financial help on the EU level.

Apart from Germany, Opel factories are based across Europe in Spain, Belgium, Austria, Poland and in the UK (Vauxhall). As Magna’s bid was more attractive in terms of fewer job losses, the reductions will most likely hit the production units outside of Germany. As a result, governments of nearly all of the above-mentioned states offered aid to prevent the loss of jobs.

The Polish government is the only one not to have made a concrete aid offer to Opel as of yet, most likely due to good production results from the unit in Gliwice. The factory is believed to have the lowest costs and to be the most modern branch in Europe. With over 2900 employees, the factory is the pride of the local government, who managed to tempt the investor with tax reliefs until 2016, educated graduates and a street named after Adam Opel. The factory was built within 22 months and attracted further investors to the region. The production is mostly planned for exports, which are currently 95 percent, with the largest purchaser being Spain. However, the sharp drop in car sales in Spain (44 percent from 2007 to 2008) cannot go unnoticed.

The optimistic plans to start assembling the Astra 4 in the autumn have also begun to look bleak, as the Russian unit is said to start building the line instead of the previously announced Chevrolet. Despite these dark clouds both the trade unions and local government remain full of hope in the light of good results from the Gliwice unit. Should the need arise, the local government might resort to asking for European Union subsidies. Apart from the Gliwice plant, Opel has two engine production units in Poland, in Tychy and Bielsko Biała.

The Opel situation has become a political issue in Poland as well, with the opposition condemning the government for ignoring the danger of job losses and being the only state not to offer aid to help safeguard jobs. With an anti-crisis package reaching the Sejm only recently, the GM request from 2008 might now receive the required attention. Still, the government’s rose-tinted spectacles, put on in the belief that production results will prevent the new Opel owners from moving the operations from Poland, might heavily distort the picture.