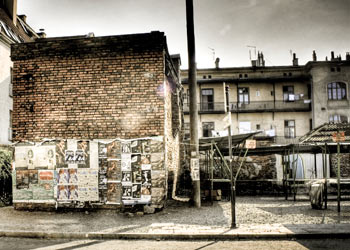 In the past 20 years, the district of Kazimierz has faced a revitalization as complex as its very history. The process of renewal in the urban village of Kazimierz started in the early 1990s and the results are apparent today in all aspects of the district’s life: its buildings, the scale of business activity, the residents and the image it presents to Cracovians and visitors.

These changes are due to several factors. Firstly, Krakow’s prosperity and improved communication links with the rest of Poland and Europe has carried along almost the whole region in its wake. Secondly, the possibility of lawful owners to reclaim their property, and the privatisation of public assets, has stimulated the renovation of dilapidated buildings and the building of new ones. Thirdly, the hands-off policy of the local authority has made the renewal of Kazimierz into a spontaneous and ad-hoc process driven primarily by the decisions of independent cultural institutions and private entrepreneurs.

As a result the obvious indicators of urban renewal and gentrification are clearly visible; property prices now reach or exceed those in all but the most exclusive areas of Krakow, the number and type of businesses operating in the district have increased and diversified, and as a cultural centre, it’s second only to central Krakow.

The changes that have taken place in Kazimierz since 1989 are far from simple though, and in 2006 Dr. Monika Murzyn of the International Cultural Centre Cracow published the first interdisciplinary study of these complexities. In The Central European Experience of Urban Regeneration, she reveals that the city authorities’ good intentions to preserve the industrial and sacral heritage of the area started in the 1990s with acts like renovating the Tram Depot on ul. Wawrzynca and locating the UJ Applied Psychology Department and the National Health Fund there, but they quickly lost control of the creeping commercialisation. Since then they have gradually withdrawn from monitoring or influencing development in Kazimierz to concentrate on neighbouring Podgórze and Zabłocie.

As a result, the growth in the quarter has become mainly driven by market forces, and nowhere is this more visible than in the previously dilapidated Jewish quarter (roughly bounded by ul. Dajwór, ul. Miodowa, ul. Bożego Ciała and ul. Józefa), which is dominated by commercial activities based on its Jewish cultural heritage. Tourism is now becoming the most important function of the district and the almost exclusive emphasis on Jewish heritage inevitably means that other components of its identity become less visible.

Dr. Murzyn also explores the conflicts between the various actors who use the space. Gentrification has pushed out the middle class residents who could afford to move, and left behind the poorer or elderly families who can’t, creating a sharp contrast with the new residents who moved in to replace them. She writes that in terms of peace, neighbourly relations and privacy, the quality of life for all residents in Kazimierz has deteriorated over the last 20 years. During this time no new public facilities, recreational areas, greenery or playgrounds have been created, no new parking spaces have been provided, street furniture and street surfaces have not been improved, and even visitors notice the lack of convenient benches, attractive street lighting and rubbish bins.

The market and property-led growth of the area, together with the lack of effective development controls, means that newcomers have the decisive vote. The reclaiming of property by rightful owners has not helped combat this since a large proportion of them live outside of Krakow or even Poland, and their properties are managed by agents, so they have no contact with the local community.

It may seem inevitable that Kazimierz is going to become less and less like an urban village and more like a fashionable inner city district, but its fate rests on what its residents – and city authorities – will decide should be the district’s future.