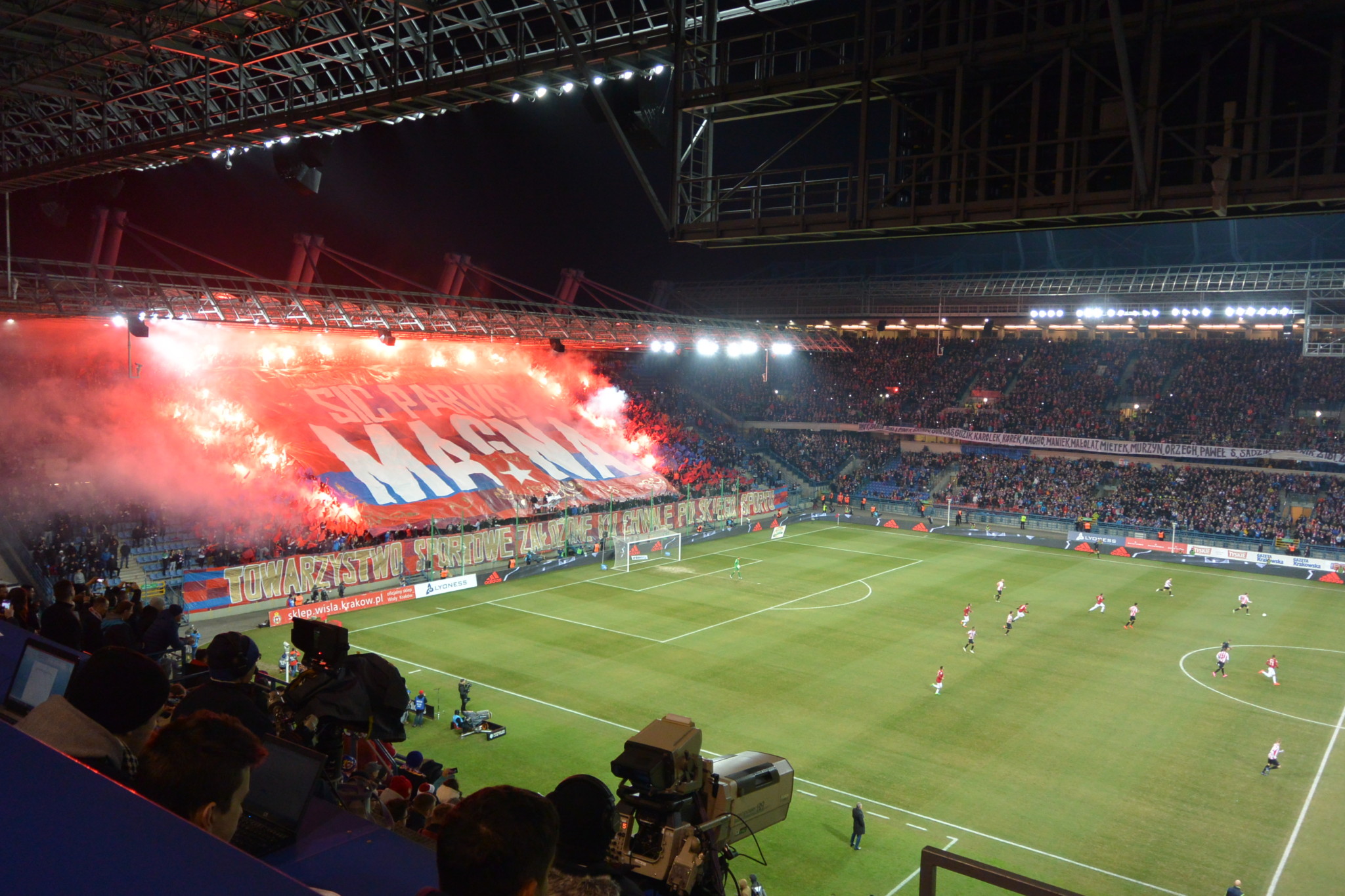 Wisła Krakow welcomed their neighbours from Cracovia for the traditional “Derby Krakowa” in the game week 19 of the Polish football league. For their last home game of the year, Wisła needed to wash away their last two defeats in what is also called the “Holy War” (“Święta Wojna”).

Cracovia won the last two derbies with the same score (2-1) including last season’s clash in Wisła Stadium! However, before the game Wisła was in much better form in the league with only one defeat in their last 10 games, while Cracovia has been struggling with six games in a row without a win and a spot at the bottom of the table.

The derby was not only played on the field but also in the stands, as Wisła stadium recorded their highest attendance this season with around 29,000 spectators!

Unlike last season, Cracovia fans were allowed in Wisła’s stadium adding up to the rivalry and the boiling atmosphere. Both supporters’ Kops trying to be more innovative than the other one, using tifos (banners), flags, forbidden firecrackers, bangers, and colorful smoke bombs. One side insulting the other team’s players, the other side booing the home team anthem, a true derby atmosphere! Cracovia fans even pushed it to the extreme by burning (!) an entire row of Wisła scarves. 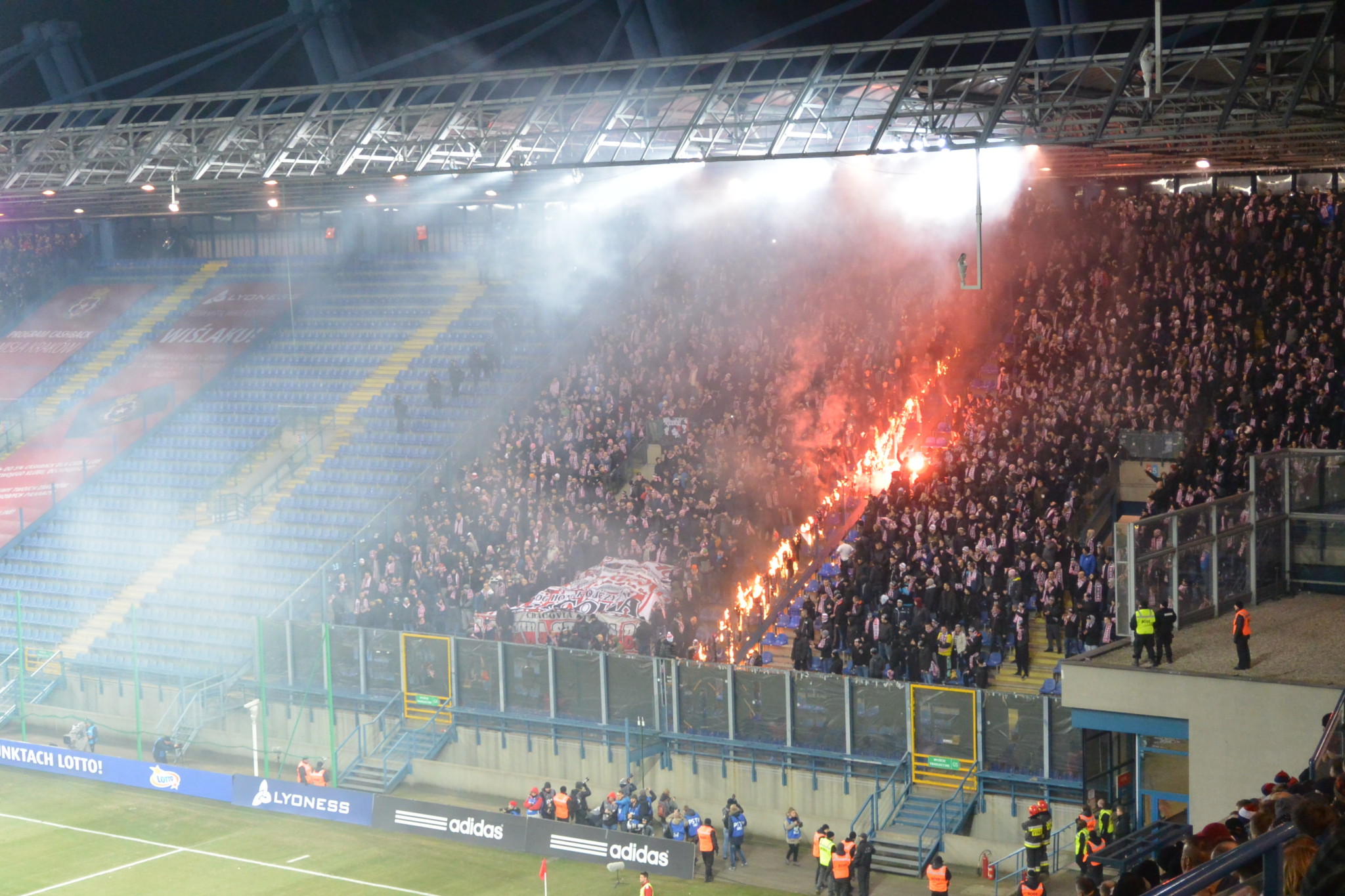 For the occasion, the home bleachers prepared an impressive giant tifo spread widely on the stand when players entered the pitch. It definitely touched Wisła players who managed to offer their fans the dream start, scoring a world-class goal after only three minutes. Croatian midfielder Petar Brlek triggered an unstoppable long-range shoot, beating Cracovia goalie.

But despite this dream start, Cracovia was in fact the team in charge, controlling the game and the ball possession. They created the three only and best scoring chances of the half. But the “Pasy” (Stripes, Cracovia’s nickname) bounced against a strongly defending side, well positioned and securing each square centimeter of their half of the pitch.

And so ended a very closed first half, but things opened up after the break. Wisła started again as strongly as in the first half. Captain Glowacki got very close to scoring the second, but Wisła’s captain header was brilliantly saved by Grzegorz Sandomierski. Definitely THE save of the game for Cracovia goal keeper!

The visitors responded 10 minutes later but failed to equalize on a fast counter-attack. However, the game got out of control following a clash between Cracovia striker Krzysztof Piątek and Maciej Sadlok, causing all the players to calm each other down.

A minute later, Cracovia got finally rewarded for their efforts, when Wisła defender Boban Jović failed to clear the danger from the box, offering instead the equalizer to Krzysztof Piątek for his fourth of the season. In the added time, the home side missed a last great chance to secure the win, but failed to shoot on target.

Final score 1-1, a draw that doesn’t really satisfy Wisła for their fourth consecutive derby without win, nor Cracovia as they stay at the 14th spot in the league.

A word with Richárd Guzmics

After the game, Richárd Guzmics kindly took some time to briefly discuss with me. The 29-year-old Hungarian central-back has been injured since last month and spent the entire game on the bench, as he was just back in the squad after his long absence.

Our season start was not good, but we worked hard as a team to get back on track. Our efforts and hard work were rewarded but now we need to continue. Our ambition this season is to be in the Top Eight and qualify for the Championship Playoffs. This is almost an obligation for our fans and a club like Wisła. They deserve the top and we have enough quality in the team. Personally speaking, I am happy to be back after my long injury. It’s never easy to be on the side for a long time, but now I’m putting this difficult period behind me, focusing on the game, and I’m hoping to play again quickly.