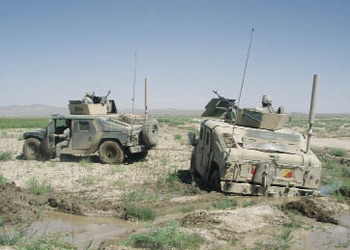 Word has it that Brezhnev was completely drunk when he decided to invade Afghanistan in 1979. Hopefully, Bush was in better shape while launching the war against terrorism.

The cost of the Soviet Army’s intervention in Afghanistan has been estimated at over $100 billion, and it indisputably contributed to the Soviet Union’s bankruptcy and its eventual collapse. The Red Army lost its invincible reputation once and for all. It should also be remembered that the Soviet invasion of Afghanistan in 1979 probably held the Russians back from decisively suppressing the Polish Solidarity movement. Thus, Polish involvement in Afghanistan should be seen through the lens of history and its moral dimension.

Poland has been participating as part of a multinational force in the Operation Enduring Freedom anti-terrorist campaign since March 2002. Polish authorities have decided to significantly increase their military involvement in Afghanistan, being aware that, from a trans-Atlantic perspective, the mission is crucial for cooperation within the structures of NATO. The potential benefits that accrue from the reinforcement of NATO and constant confirmation of Polish political and military credibility are obvious.

Indeed, this is the first time in
300 years that Poland is in a position to build its international prestige. The post-Yalta order in Europe appeared to be a true disaster for Poland, as after being occupied by the Red Army, it became a Soviet satellite for almost 50 years, enduring many hardships.

Polish politicians keep stressing the need for close bonds with America in order to ensure the country’s safety. The strengthening of its partnership with the U.S is often considered the highest priority for Polish foreign policy.

After all, the possible American return to isolationism combined with the growing political influence of Putin’s Russia on Europe can put Poland in a critical position. The lack of communist and fascist threats makes the idea of “keeping Russians away and Germans down” obsolete. But if a day comes when the Americans decide to leave, the situation could change.

Beyond the obvious advantages, the army officials view the war as an effective training for Polish forces. The Polish Army has been completely altered due to the missions in Iraq and Afghanistan. It was the mission in Iraq where it had a chance to learn about modern systems of command and where the soldiers gained invaluable experience. They have been using their experience and skills in the combat environment in Afghanistan. When welcoming the last contingent coming home from Iraq, Defence Minister Bogdan Klich said it was because of these soldiers that the army is now more modern and better prepared for new challenges.

And there are plenty of challenges in Afghanistan. ISAF forces stand on very thin ice, using aggressive methods in fighting the Taliban. Disproportionate and rash use of force stands as one of the worst plagues destroying ISAF-Afghan relations. The effect is a huge death toll among the locals. Some observers have argued that NATO soldiers often fight many people they don’t need to. Their reputation for raiding Afghan houses in the middle of the night, and creating a disproportionate figure of civilian casualties by air strikes erodes support for foreign forces and threatens the fragile harmony.

It seems, however, that the Polish army has a different approach to their Afghan allies than the British or Americans do. Poles have quickly realized that the less aggressively they operate, the better results it can bring. They treat locals more like partners, and their common strategy involves building closer relations. Soldiers sit down together, drink tea, and talk with people. That sort of communication helps the Afghan people support the coalition.

Indeed, building good relations with the local people seemed to be one of the most important parts of the Polish mission. A good example was the “Arabian Days” idea, when Polish doctors helped to treat Iraqi patients. During one of these operations a father of a 10-year-old girl named Huda asked for help, as the little girl couldn’t hear. The immediate action of the soldiers, who gathered money for the operation in Poland, enabled the surgery to happen. After 10 days the girl heard the first sounds in her life. The story is now proudly displayed on the official Polish army website (www.wojsko-polskie.pl).

The way Polish soldiers helped little Huda should be seen as a perfect illustration of their humanity. For the soldiers, this part of the mission is as important as the more typical military operations. In reality, the Polish presence in Iraq and Afghanistan is overflowing with this kind of work. This can be regarded as a kind of “soft power” which allows the occupation forces to gain favour with the Muslim public.

The Afghan authorities in the Ghazni region, which is under Polish control, are pleased with the Poles’ presence. At the beginning of the Polish mission, they expected Poles to be a bunch of unpredictable troublemakers, shooting everything that moved. After a couple of months they claim the province seems to be much more tranquil under the soft-style Poles than under the Americans before them, though the latter sent many more troops. This opinion is shared by much of Afghan society as well. Although there are plenty of skirmishes with the Taliban, no civilians have been killed at Polish hands in Ghazni to date.

Since the situation in Afghanistan is still very unstable, the fate of this war seems to be a question mark. Adding to the gloom, there is no good solution and even the withdrawal of NATO forces does not necessarily mean peace. The country can collapse into civil war, as happened when the Soviets left. At the root of the troubles lies the lack of will to stop the conflict at this stage, regardless of how brutal or delicate the soldiers are. They seem to lack the power to bring peace quickly. The words I heard from the soldiers with whom I spoke are very symptomatic: “Don’t ask about the point of war, as we can’t see any after having fought in two of them. It’s politicians, not soldiers, who start wars. We are only instruments in their hands.”