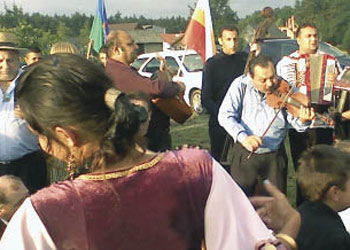 In Krakow’s Old Town, locals and visitors alike have become familiar with the clattering of horseshoes on cobblestone streets, with coachmen offering nostalgic rides from the northern part of the Main Square. However, on 23 July, the nearby town of Tarnów will experience an entirely different equine parade: for a couple of days, a fleet of fancifully carved and painted carriages – permanent exhibits of Poland’s only Roma Museum – will be reactivated to bring the 10th Gypsy Caravan of Memory (Polish: Tabor Pamięci) on the road.

Begun in 1996 as a means of commemorating the mass murder of the region’s Gypsy population by German police forces during World War II, the Tabor has succeeded in sparking interest from local people, authorities and the media, as well as reaching out to southern Poland’s Roma communities.

Between 23 and 26 July, several horse-drawn caravans will travel through the countryside around Tarnów, pausing at the villages of Żabno, Bielcza and Szczurowa, where contemplative ceremonies will be held at local cemeteries for the victims of the Gypsy Holocaust, or Porajmos (which means “The Devouring” in the Romany language).

For much of their history, the Roma didn’t possess any culture of “written history” – memories were kept alive only through the spoken word, and often the traces of individuals simply disappeared with the last person who remembered them. Many Roma were killed during World War II, either at concentration camps or during mass shootings, like in Szczurowa (45 km northwest of Tarnów) where 93 Roma inhabitants of the village were shot at the local cemetery. Only one survived. In the aftermath of World War II, the surviving Roma had too many hardships to endure to deal with questions of history and commemoration.

As ethnographers Andrzej Mirga (himself a member of the Bergitka, or Carpathian Roma, as well as a former employee of the Jagiellonian University in Krakow, and now chairman of the Project on Ethnic Relations Romany Advisory Council) and Lech Mróz (Director of the Ethnological and Cultural Anthropology Department at the University of Warsaw) noted in their book Cyganie (Gypsies), ”it is inappropriate in this culture to commemorate the time of death, both individual and collective, from the period of World War II.” Only since the 1970s have Romany elites begun to acknowledge the importance that the memory of the Porajmos plays in the creation of a collective Romany identity.

The Roma are not in fact a homogeneous group. However, they do share their origins in northwestern India, from whence they probably departed in the 10th century, crossing parts of Persia, Armenia and Byzantium, before reaching Central Europe. But as a result of their century-long migrations, varied experiences and interactions with languages and people of their host countries, an enormous diversity of dialects, traditions and therefore group identities have developed.

On the one hand, the Caravan of Memory serves an introspective purpose. Families gather at the memorial sites, where ceremonies are held by Father Stanisław Opocki, the Tarnów Diocese’s Pastor of the Roma Community. On the other hand, the Caravan is dedicated to life, social integration and cultural exchange. Not only does it bring together families from the whole of southern Poland, including guests from abroad, but the carts are accompanied by Roma musicians with their instruments, who also perform at the campsite of the Caravan, where people stay overnight, sleeping either inside one of the carriages or in tents. The evenings are spent at the campfire, with the telling of tales, music and dancing. As Adam Andrasz, one of the initiators of the Caravan points out, “All visitors are welcome to join the Tabor,“ on the grounds of polite behaviour and mutual respect. “They are guaranteed a warm meal and a good time getting to know Romany food, music and traditions.“

There are four main groups of Roma living in Poland. Each group has its own dialect, traditions and history: the Polska Roma, mostly living in western and central Poland, were nomadic until the 1960s, when the communist government declared a general prohibition on travel and started a program of enforced settlement. Many families had to give up their old way of life and the number of travellers decreased each year until the end of communism. Nowadays, some of the most culturally active Polska Roma live in Gorzów Wielkopolski, home to the late Roma poet Papusza and the annual Romane Dyvesa international music festival, which is held at the beginning of July.

The Bergitka Roma, or Carpathian Roma, in the south and southeast of Poland, have been sedentary for almost 300 years. Most of the Roma in Lesser Poland and the neighbouring Subcarpathian Voivodeship belong to this group, sharing Romany dialects very similar to the ones spoken in Slovakia, whilst the Polska Roma, due to their different history, have many German elements in their dialect. The latter group emigrated to Poland in the second half of the 16th century to escape persecution in the German-speaking lands.

The two other main Roma groups in Poland consist of the Kalderash and the Lovari, who had emigrated from Romania to Poland (as well as to other countries of northern and western Europe) in the second half of the 19th century, after the abolition of slavery in 1855/56.

In the beginning of the 1990s, after the downfall of communism, many Roma from Romania travelled through Poland once again in search of a new home. Many of them moved onward, whilst some stayed in Poland and got partly integrated into the local Roma communities.

One of the best ways to get an impression of Romany life in Poland is to visit the permanent exhibit of Roma culture and history at the Ethnographic Museum in Tarnów. Thanks to the dedicated interest and initiative of ethnographer Adam Bartosz, director of Tarnów’s Muzeum Okręgowy, the exhibit has been on view to the public since 1979, and at a separate building since 1990. Adam Bartosz is also the author of a very informative book on Romany history and culture called Nie bój sie Cygana/Na dara Romestar (Don’t be afraid of the Gypsy, published by Pogranicze, new edition 2004), which is available in Polish.

The Ethnographic Museum in Tarnów is constantly working together with the Socio-Cultural Roma Association (Społeczno-Kulturalne Stowarzyszenie Romów), which was founded in 1963 as the first of its kind in Poland. Today’s director, Adam Andrasz, also runs Poland’s only Roma restaurant, Ke Moro, which can be found in Tarnów at ulica Żydowska 13. He is not only a versatile musician himself, but also continually supports social projects to increase the quality of education for the Roma youth. His personal aim is to achieve social equality and to fight racism and prejudices. “I would have had the alternative to do many other things,“ he says, talking about his social engagements; “go into business, be a successful entrepreneur perhaps… but this is a true matter of the heart. Can you go against your heart?“ Together with Adam Bartosz, Adam Andrasz was the initiator of the annual Gypsy Caravan of Memory in 1996, and until today, both of them remain active as the Caravan’s organizers and spokesmen.

The 10th Gypsy Caravan of Memory (Tabor Pamięci) 2009 is going to take place from July 23rd until the 26th. The Ethnographic Museum featuring a permanent exhibition of Roma History and Culture is located at ul. Krakowska 10 in Tarnów. For more information see www.muzeum.tarnow.pl

More generally, music lovers should watch out for members of the Nowa Huta-based group Kałe Jakha (Black Eyes) who cooperated with Huta’s theatre Łaźnia Nowa in 2007, contributing their music to the adaptation of Federico García Lorca’s “Blood Wedding” (“Krawe Wesele”). Those looking for unique voices and spiritual depth in music should browse stores for the recordings of the group Kałe Bała from the Tatra Region, who perform both traditional songs and the self-written poetry in Romani language of singer, guitar player and band leader Teresa Mirga.