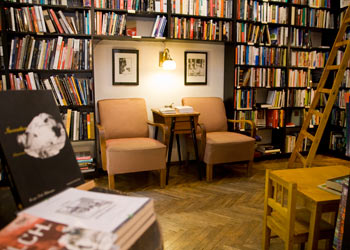 Maybe it’s the distinctive handwriting on the flyers and posters, and the stack of maps that greets you when you slip through the old wooden doors. Maybe it’s the kaleidoscopic collection of new and used books peeping eagerly from the floor-to-ceiling shelves, begging you to wonder how they got there, and who might have read them last. Maybe it’s the aroma of the homemade American baked goods in the cosy, front-room café, or the old jazz and folk standards cooing from the speakers overhead.

Whatever it is, there’s something about Massolit, the English-language bookstore at ul. Felicjanek, something that makes its little world instantly recognizable. If Krakow is a cultural hub of Central Europe, Massolit is another one nested inside: it’s a home for the city’s English-speaking community, from long-time residents to the continual stream of passers-through.

Maybe it’s this community that makes Massolit what it is – after all, many of its members have left lasting imprints on the store. Finnish fans took the initiative to create its Facebook page. Swedish neighbours helped create the online tour on the store’s Web site (and are featured in it, canoodling in a corner of the café). Local artist Dominika Balakowska is responsible for that distinctive print publicity, and Anglophone Cracovians from all corners of town regularly post announcements, apartment ads, and even invitations to secret writing groups on the back hallway bulletin board. There’s even a feminist reading room managed by eFKa, a Krakow women’s organization.

Then there’s the constant cycle of events. Translator Bill Johnston’s 6 June reading packed the back rooms and kept the place buzzing with conversation late into the night, thanks to wine and home-cooked hors d’oeuvres on the house. Acclaimed writers who have given readings at Massolit include Wisława Szymborska and Olga Tokarczuk. And it’s not just literary guests that David Miller, co-founder and owner of the store, is interested in – he even welcomed the diminutive Danny DeVito when the actor was in town: “I gave him my card – but he didn’t come,” Miller laughs.

As many foreigners in Krakow are aware from the dark tone of their home newspapers, the economic crisis has forced many independent cultural meccas, ones like Massolit, to close their doors around the world. “There was this wave of tourism,” Miller admits, “and with prices rising, you don’t get the foreigners moving here like you used to.” These two groups, he says, constitute the main customer base, though the store has also earned a reputation within Poland.

“But I’ve made my peace with it,” he muses. “And this year is better than last,” when prices were infamously high in Poland. Besides, Miller has plans to adapt to the situation: Massolit fans can look forward to an expanded café space. Wine will be served, in addition to a wider selection of baked goods, which Miller himself will help make.

In future events, Miller also plans to expand the bookstore’s activist component, which he says has been there “from the beginning.” (The original idea for Massolit was a library, “so people could see what it’s really like in the West,” he says.) Indeed, one of Miller’s favourite past events was “Not in Our Name”, a gathering in response to the announcement of the Iraq War in 2003 – and the reason an American flag with the slogan still hangs over the café counter. Specifically, he says, “I want to connect with environmental groups concerned with recycling.” The slowness to get into the practice, he predicts, “will be a huge problem for Krakow.”

Miller calls Massolit’s reputation as a hallowed local institution “curious”: “We just did what we did, and people liked it.” After a moment, he adds: “And we do have really great books that you can’t get anywhere else.”

Perhaps Massolit is just living up to its name. True to Miller’s Russian-lit background, it comes from the fictional literary organization featured in Bulgakov’s The Master and the Margarita – a presumed abbreviation for “Literature for the Masses.” For in the end, that special-something-about-Massolit is likely the multifarious but thorough spread of books. The 14,000 on hand span many topics and genres, and many are bought from passers-through, whilst 12,000 are permanent titles. Subject fields range from Polish literature and history to women’s studies to Jewish studies. There are even travel guides, a few foreign language collections, a children’s corner replete with toys, and an Asian studies shelf.

“I always wondered if I’d get tired of the books,” Miller says. But he hasn’t: He still picks every one himself.

Massolit Books can be found at ul. Felicjanek 4, and at www.massolit.com.