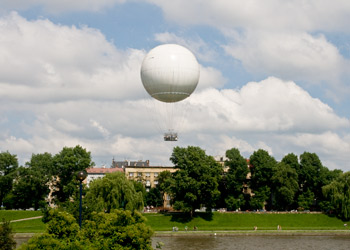 Cracovians are becoming accustomed to the great white balloon and tourists are loving it, but a group of dissenting voices has caused controversy. An article in the Polish daily Gazeta Wyborcza titled “Americans Stab the Balloon” (“Amerykanie kłują balon”) has provoked more comment than the balloon itself.

Public opinion is divided over the balloon. Many see it as an exciting and attractive addition to the city. Others are concerned that it is the latest example of a policy of aggressive development and Disneyfication that is out of control. Both points of view have become somewhat lost, however, in the furore generated by the Gazeta Wyborcza article.

The setting of the balloon in such a sensitive location, close to Wawel Castle and Skałka church, has been controversial from the beginning. Placing such a visually dominant attraction next to two of Poland’s most important ancient monuments was seen as bold by some and disastrously disrespectful by others. Though assembled and technically ready to fly since mid-2008, the balloon fell foul of civil aviation rules that kept it grounded for half a year. The balloon’s operator, HiFlyer Polska, finally received the necessary Air Operator Certificate on 10 April of this year. This long delay, during which the balloon crouched fully inflated behind ugly construction fences, fuelled resentment among local residents.

It was not until the balloon went into regular operation that it became clear how great its visual impact would be. Rising 150 metres into the air at the end of its tether, the pure white globe is visible from all over the city. Rising and falling every 15 minutes, its appearance over ancient rooftops and spires can be sudden and startling. In a city that wears the tragedies and glories of its long history proudly, the frivolity of the balloon is jarring for some.

The Gazeta Wyborcza article, which appeared at the end of May, made the sensational claim that a group of Americans were organising an aggressive campaign against the balloon and identified one Christopher Gray as the leader of this movement. A large proportion of the more than 150 comments attracted by the article on the paper’s website concentrated on attacking Mr. Gray for interfering in a purely Polish matter. Even many of those opposed to the balloon questioned the right of an American to express a similar opinion.

In an interview with the Krakow Post, Christopher Gray has expressed anger and bewilderment over the content of the article and public reaction to it. “This is a peaceful campaign,” he said “we do not want to attack anybody or anything.” He also made it clear that he is just one member of a group calling itself “Protect Krakow’s Heritage” (Towarzystwo Miłośników Historii i Zabytków Krakowa) that is largely made up of local Polish people, not foreigners. “I’ve lived here for 10 years,” he added. “My life is here and this is my home. I think I have as much right to protest as any other Krakow resident, Polish-born or not.”

The city authorities have been investing heavily in programs to improve Krakow’s attractiveness to tourists and foreign investors for several years now. Although many of these improvements are welcomed by groups such as Protect Krakow’s Heritage, there is growing concern that some changes are being made without any consultation with the city’s residents. The balloon has become the most striking symbol of this concern.

HiFlyer Polska has permission to use the current site until the end of this year after which time the project will be reviewed. Unconfirmed reports suggest that the balloon will likely be re-sited on the opposite bank of the river. The eventual resolution of this controversy may have implications for other Polish cities since HiFlyer Polska is said to be negotiating with city authorities in Gdańsk and Chorzów for two more balloons.