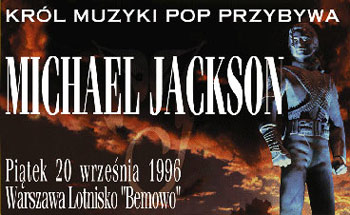 As Poland woke this morning, the main topic on most people’s lips was Michael Jackson. Every morning news show on television mentioned the King of Pop’s death, as the story quickly spread through the Polish news media.

To see how this news is affecting Cracovians, the Krakow Post hit the Market Square to gauge Poles’ reactions.

“I think it’s a big loss for the music industry, especially his fans,” said 23-year-old Kaska, a student. “My first reaction was shock. He did a lot for music.”

Shopping in the Sukiennice, John, 38, a tourist from Newtown, Pennsylvania, stated: “It’s sad in that he lived a tragic life, and more than any other musician, most fans seemed to separate his art and performance from his personal life.”

Joanna, 20, a stall operator in the Sukiennice, added: “My sister was a big fan, so I’m sure she’s sad. I was not excessively moved, but as he was so young, it’s a loss.”

However, it was Andrzej, 66, who put things into perspective: “There are more important things to think about than the death of a pop star;” he cited Poland’s 1.4 million unemployed as one of them, as well as pointing to the makeshift shrine for victims of the recent violence in Iran that Cracovians had constructed on the square.

Michael Jackson has had an interesting history with Poland. In 1997, news spread that the pop star intended to build a theme park in Warsaw. In May 1997, he returned to Warsaw and signed a “preliminary letter of intent” stating his desire to develop the “Family Theme Park”, and rough estimates placed Jackson’s intended contribution at $100-300 million. However, an agreement was never reached with city authorities, and nothing came of it.

Jackson performed in Poland only once, on 20 September 1996, as part of the HIStory World Tour. The tour included a total of 82 shows, and was attended by a record-breaking 4.5 million fans. 120,000 people attended his concert in Warsaw’s Bernowo Airport, which was the second largest audience of the tour (his concert in Prague drew 127,000 fans).

His comeback tour, titled “This Is It”, was scheduled to begin in July of this year. Jackson was pronounced dead last night at 22:36 Polish time (GMT+1).