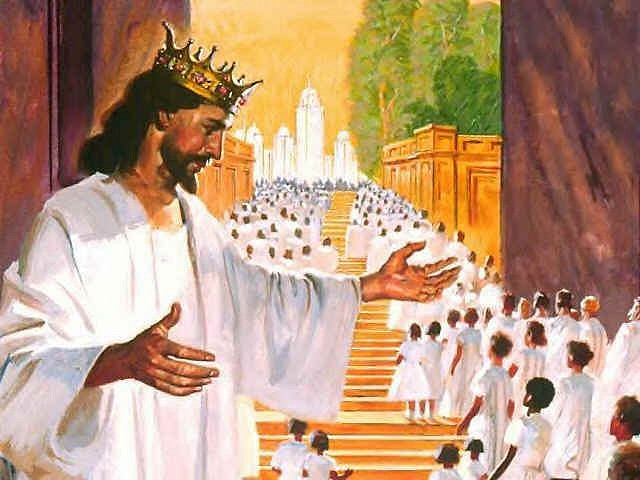 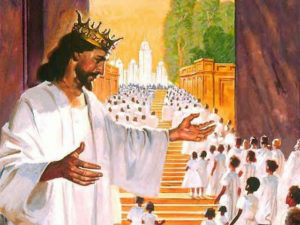 Polish history books may now need to begin printing revisions, as Stanisław Poniatowski [1732-1798]  is no longer the ‘last King of Poland’. The governing of the Polish people has fallen into a great variety of hands, good and bad, over the last few centuries. However, never before has there been ruling, a man who is not technically (although he is very much spiritually) still alive .

On Saturday morning at Łagiewniki, the crowds gathered to hail their newest monarch. Attended by President Andrzej Duda, his mother and other dignitaries; thousands of pilgrims flocked to the Sanctuary as Jesus Christ was enthroned as the ‘King of Poland’.

This is an excerpt from the speech given by Archbishop Stanisław Gądecki:- “In the Jubilee Year 1050, anniversary of the Baptism of Poland, in the Extraordinary Jubilee of Mercy, here we Poles stand in front of you [together with their authorities, clergy and laity] to acknowledge your reign, surrender to Thy law, entrust and take you to our homeland and the whole nation”.

Whilst this act of may have been only a symbolic gesture, Polish governmental law has already for some time been heavily intertwined with the country’s predominant Catholic Religion. For years, civilian protests have continued to take place in an attempt to fight against religiously influenced legislation such as abortion laws and laws regarding alternative sexuality.

This strong statement made by the Polish church has only added more fuel to the fires of the heavy debate currently being battled out between Polish Citizens. Essentially regarding the separation of church and state, heated arguments about where in fact the line should be drawn are taking over internet forums, social media and office lunch hours.

Traditionally, Polish brown bears use the autumn months to eat a much as they can in order to line their stomach with copious amounts of fat. The bears will soon need this extra layer as during winter, when food is scarce and energy is easily spent, they find a nice safe place and let their bodies relax into a state of ‘torpor’. Similar to hibernation, when entering torpor, the heart rate and breathing of the bear slows to a meditative pace as the body of the animal feeds from the stores of fat built by its autumn indulgence.

This year, however; it seems that the brown bears of Podkarpacie aren’t in the mood for a nap. High temperatures and an abundance of food are encouraging these giants of the forest to stay awake, enjoying an unexpected second wind. Recorded by trigger cameras hidden in Baligród Forest District, the large predators, usually snoozing in a den or a cave by this time of year, were seen feeding on deer carcasses that were left by wolves.

A notable exception from the over-time feasting and encouraging age-old stereotypes, the pregnant ladies have stayed home to pass out in bed whilst the males party late into the season.