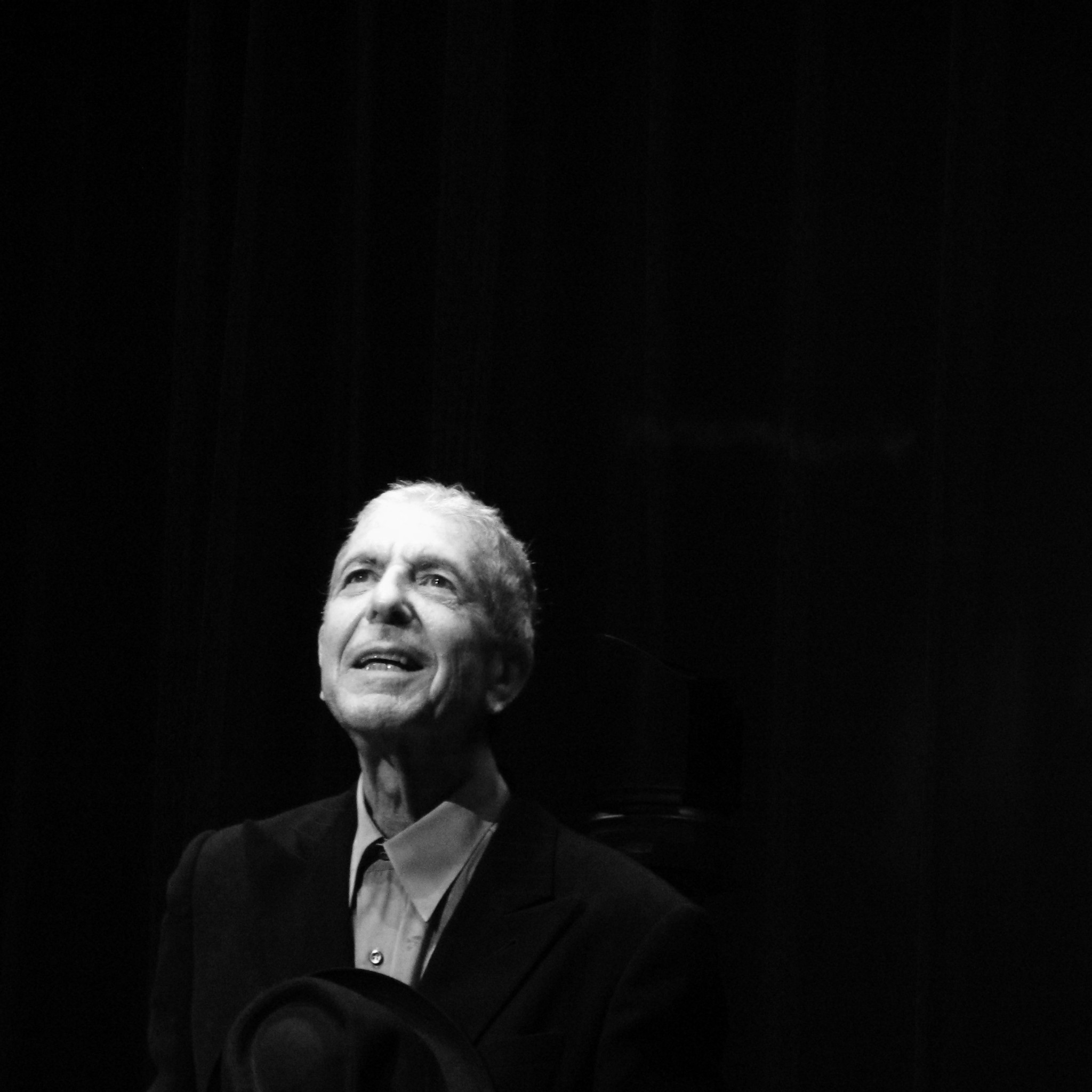 First of all, if you do nothing else this week, your spirit and the universe it inhabits requests – nay, DEMANDS, that you get yourself to the Main Market Square at 18:00 this coming Sunday (20th) to pay tribute to the brilliance of Leonard Cohen, who lost his battle with mortality last Monday. You will be part of an enormous sing-along with a choir, and various Polish artists, of his ubiquitous “Hallelujah”.

Leonard had a special relationship with Poland – it is one of the few countries where it’s common to hear his songs on commercial pop radio next to the hits of the day, and translations into Polish became well-known in the post-communist era. As recently as last year, the famous pop-folk-rock-disco polo singer Krzysztof Krawczyk released Tańcz mnie po miłości kres Piosenki Leonarda Cohena, a successful tribute album of interpretations of Cohen compositions.

This gathering represents one of the things I love most about Poland – genuine love and respect for the true artist. I believe it will be a magical hour.

If you see me, come say hello. For those of you who only know me from this column, I’ll be the large, aging American with long gray hair and his arm in a sling.

And, most likely, a tear in his eye.

By the way, in case you’re wondering what “Hallelujah” sounds like in Polish, here’s the band Mithril (nerd alert – spot the Tolkien reference) to show you;

It is only slight hyperbole to say that when bass maestro Steve Harris created Iron Maiden in the late 1970s, he reinvented the genre of heavy metal, adding both kinetic high energy rhythms and progressive rock sophistication. It is an understatement to say that EVERY hard rock/HM band since owe him a serious debt, and the entire genres of power, neoclassical, epic, and even melodic death metal, to name just a few, would be very different indeed without his influence.

And that’s before mentioning the man’s singular bass guitar style, which quite simply revolutionized the instruments role in the music.

Still, Harris is not one to rest on his laurels – Maiden have never wavered, and their most recent album, 2015’s The Book Of Souls, is every bit the equal of their 1980s-90s heyday, proving that they are still on top of their game.

But what’s a road rat-stage junkie like Harris to do between massive worldwide stadium tours? In 2012, Steve released the side project, British Lions, an excellent slice of classic melodic 1970s-styled rock, featuring a great band, songs, and performances, influenced heavily by the cornerstones of hard rock (think Thin Lizzy or UFO) while simultaneously sounding vital and contemporary.

And now, while preparing for the sophomore British Lions effort between Maiden engagements, Harris is giving Krakow the rare treat of seeing his masterful musicianship up close and personal – as opposed to the 40,000-seat stadiums he usually inhabits.

That’s the difference between a musician and a mere rock star; Harris certainly has the financial security to spend his time off from the ‘day job’ lying on a beach somewhere – instead the man will be rocking at Kwadrat for what amounts to pocket change for him.

Because that’s what real musicians do – they PLAY.

As THE EXPLOITED’s classic 1981 album proclaimed, Punk’s Not Dead, but its graying temples will certainly be on display this weekend at Kwadrat. One of the original leading voices opposing the Reagan/Thatcher era, these Scotsmen were also formative in finding the common ground between hardcore punk and thrash metal, back when the audiences for the two were extremely divided. Despite the 2014 heart attack of founder-singer-spokesman Wattie Buchan, and the band releasing no new music in a dozen years, their legend has kept them packing houses consistently throughout this century, and they still deliver. Sole original member Wattie barely took a break to recuperate before returning to the stage.

English street punks GBH (originally Charged GBH – which for non-Brits is an acronym for the police charge ‘Grievous Bodily Harm’ – assault, basically) actually go back even further, having formed in the wake of the punk explosion that was London 1977. Like THE EXPLOITED, their back catalogue is their calling card, and this year sees the re-release of their 1982 debut City Baby Attacked By Rats album.

Having lived in New York City in the 1990s, I have a fondness for THE CASUALTIES, who used to play squats and house parties in the East Village during my time there. Not only are they the young’uns on the bill, but they are only band actually touring a new record. Chaos Sound, their 10th studio album in less than 20 years, was released earlier this year, and is among their best, featuring an excellent cover of the Motörhead song, “R.A.M.O.N.E.S.” – a simultaneous tribute to Lemmy Kilminster and the original four ‘Brudders from Queens’ – all of whom have moved on to the next gig.

There’s a lot of legend to be had at Kwadrat Saturday night.

Over the course of 15 studio albums since 1980, KILLING JOKE have been many different bands to many different audiences. To fans of their first couple albums, they’re symbolic of the era when punk started thinking of itself as art. To veterans of the mid-1980s goth scene, they’re the authors of such dance floor classics as “Love Like Blood” and formative Darkwave albums like Brighter than a Thousand Suns. Yet to your average Gen-X’ers, they’re the guys who did the alternative anthem “Eighties”, famously stolen by Kurt Cobain for the main guitar riff to Nirvana’s “Come as You Are”. They’ve done albums that were almost purely electronic, and others that could be considered industrial occult metal.

And that seems to be where they’ve landed late in their career. This year’s powerful Pylon album is KILLING JOKE at their heaviest, while still possessing the songwriting skills that have always been their forte.

More importantly, this is the tour to see; unlike some previous jaunts, the band is playing material from every era (nearly every album, in fact) of their history, and all the classics are present and accounted for.

Whatever KILLING JOKE is YOUR KILLING JOKE, this may be the only chance to see a career-spanning “greatest hits” set. Take advantage of it.

Italy’s SVIET MARGOT split their time between their home country and the UK, and are led by the very talented vocalist/composer Tiziana Giudici, who has performed rock, opera, and jazz with such artists as Prophilax, Spiritual Front, and the Marco Taschler Choir. They are touring their second album, Glance to Infinity, and play a kind of melodic post rock with some jazz and prog influences. They are, by all accounts, a great live band, with Tiziana in particular having a reputation as a dynamic and charismatic performer.

If all of the shows listed above are just a tad too… intense for you, how about a trip down memory lane with some of Poland’s best known singers paying tribute to the Gloved One himself? Multi-platinum selling artist Ania Dabrowska (who wasn’t yet two years old when the Thriller album was released,) the versatile Kuba Badach, and former child star/singer Natalia Kukulska will be joined by mellow rockers Riffertone, K8 (Kasia Roscinska,) and more to celebrate the music that earned MICHAEL JACKSON the title ‘The King Of Pop’ (well, actually he gave himself that title, but… still…)

Although Mr. TURNAU will appearing in Krakow twice in December (more on that next week,) this is the final performance (for the foreseeable future) of the complete 7 widoków w drodze do Krakowa (Seven Views on the Way to Kraków), his conceptual 2015 song cycle. If you didn’t catch the amazing performance of it in the Rynek Głowny here last summer, I highly recommend the trip. Like then, he will be supported by a full orchestra, but here will have the time for an additional long set of other music from his catalogue. In a 20+ year career, the 7 widoków… album may be his masterpiece, and seeing it performed live with an orchestra is a truly magical, even spiritual, experience. The story of the album is as fascinating as the music itself, and you can read about it (and TURNAU) here.

GILLAN is generally considered the definitive Deep Purple vocalist, having fronted the band during its legendary MK II period (1969-73,) which included such ubiquitous hard rock masterpieces as the Deep Purple In Rock, Machine Head, and Made in Japan albums. He returned for the reformation of that lineup in 1984 and, outside of an ill-advised period in the early 1990s when he was briefly replaced by milquetoast Rainbow singer Joe Lynn Turner, has been at the helm of Purple since.

DP bassist Roger Glover is currently in post-production preparing the follow up to their surprisingly great 2013 album Now What!? for release next year, which will no doubt be followed by the usual round of touring the world. In the meantime, GILLAN, as has been his wont in recent years, is taking advantage of the break to do a short tour of small venues, backed by an orchestra as well as Purple keyboardist Don Airey.

Along with the songs you’d expect (like, you know, the one about “Smoke…”), he’s taking advantage of the chance to play some not oft-performed DP deep cuts, such as “Demon’s Eye,” “Razzle Dazzle,” and “Anya,” as well as a number of traditional songs and cover versions.

Purple are incredibly respected and revered in Poland – they play here often, and GILLAN himself even has a star on the ‘walk of fame’ in Gdańsk. The title of his 2009 solo album One Eye to Morocco was inspired by the Polish idiom, “one eye to Morocco and the other to Caucasus”, which he first heard while sitting outside the Alchemia club here in Plac Nowy.

His voice may not have quite the power and intensity of his youth (listen to his performance as Jesus on the original Jesus Christ Superstar album from 1970 – his “Gethsemane” is one of the greatest recorded rock vocals of all time, and it was done in one take) but he is still one of the all-time greats, as well as one of the authors of the hard rock singer vocabulary, inspiring all who came after.