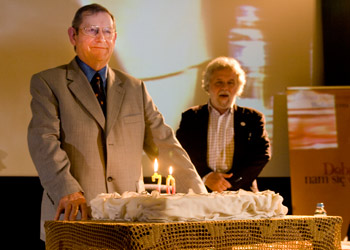 Fellow historians, professors, students and the general public gathered tonight to celebrate the 70th birthday of one of the most prominent adopted Cracovians: Professor Norman Davies. The gathering, held in the giant theatre of Kijów Cinema, took the form of a discussion between the guest of honour and Professor Władysław Bartoszewski and Under-Secretary of State Andrzej Kremer.

The celebrations were organised by Professor Davies’ Polish publisher, Znak, so mentions of the historian’s extensive writing career abounded. But the main topic of discussion was, naturally, history, and specifically, Norman Davies’ notable impact on the study and discussion of European history.

Professor Bartoszewski, who often stole the show with his captivating personality, reflected that the difference between Norman Davies’ books and those of Polish historians writing about Poland at the time was that Davies’ books could be read; other books were used for facts, like an encyclopaedia. Likening Davies to Joseph Conrad, he called him a “happy accident of two nations”.

Not present was Foreign Minister Radek Sikorski, though he did appear on the big screen with reflections and birthday wishes. According to Sikorski, Davies is “the first historian of united Europe”, meaning that Davies was the first to focus on the entire continent, and not just the larger Western countries. He also stated that Europe will only be united “when all Europeans know the history of the entire continent”.

The gathering concluded with a recorded performance by accordion group Motion Trio (and the revelation that Davies plays the accordion himself), as well as the traditional birthday cake and gifts. Professor Davies managed as well to promote his forthcoming book, out next year, titled Lost Kingdom, which will cover the forgotten chapters of history of the nations that no longer exist in Europe.