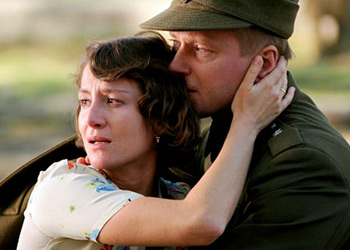 In the months that followed the collapse of the Iron Curtain, statues of Soviet bigwigs were wrenched from plinths across the former Eastern bloc. Krakow, Poland’s ancient Royal capital, was no exception to the rule. Countless monuments were dismantled, yet there was also the exhilarating chance to build anew.

One of the first memorials to be raised in post-communist Krakow was an austere cross at the foot of the Royal Castle. Standing some 20 feet high, it was inscribed with a single word – Katyń – and the dates 1940-1990.

83-year-old director Andrzej Wajda, whose film Katyń notched up his fourth Oscar nomination, never believed that he would live to see such a cross, nor that he would be able to make this movie.

Talking over coffee in a turn-of the-century café on Krakow’s Market Square, he exudes the gracious, warm-hearted air of a gentleman of the old school. He is down to earth and soft-spoken. On set, he must take the commander’s baton, but he has a gentle, incandescent way of telling an anecdote that is disarming.

Wajda has already won lifetime achievement awards at both Berlin and the Oscars, and his roster of prizes dates back to 1957, when he won the Silver Palm at Cannes. During the eighties, he became a hero of the Solidarity movement, and he was a long-time dilemma for the Communist Party, which failed to make him collaborate. That said, in recent years it has become fashionable amongst some Polish journalists to write him off as washed up. Katyń has forced those critics to eat their words.

Katyń remains one of the most inflammatory words in Polish-Russian relations. During World War II, it provided a pretext for Stalin to sever ties with the Polish government-in-exile, then based in London. After 1945, when Poland fell into the Soviet sphere of influence, it became a taboo topic for fifty years.

All this revolved around a “perfidious lie”, as one of the characters in Andrzej Wajda’s new film exhorts. Sixty-six years ago, in April 1943, Goebbels released what he believed to be his greatest propaganda coup of the war. 4,243 Polish officers had been found in mass graves in the Katyń forest in German-occupied Russia. Each had been shot in the back of the head with a single bullet, their hands tied behind them. Five lists would later reveal that 18,000 other Polish citizens had suffered similar fates at various locations in the Soviet Union. Stalin denied the crime, blaming the Germans. Only in 1990 did Gorbachev admit Soviet guilt.

“The Katyń crime was not so much a crime against the Polish army,” Wajda expands, “but against the intelligentsia, because more than half of those 22,000 victims were teachers, academics, doctors, professors, historians, painters – it was the entire elite.”

Whilst Poles were being shot in the Katyń forest, Stalin was deporting thousands of well-to-do families to the wilds of Siberia and Kazakhstan. The word Katyń has thus taken on a symbolism that speaks of the broader campaign to liquidate Poland’s intelligentsia. The assault is still fresh to many families. Marta Urbańska, a professor of architecture in Krakow, lost her grandfather, Wincenty Urbański, in the crime. He was a liberal MP on the fourth list. His remains have yet to be recovered, although further mass graves were penetrated near Kiev last year, and a handful of victims have now been positively identified.

“The tragedy hung over my childhood as it did for 20,000 other families,” she recalls. “The attitude towards the crime was a touchstone for people’s morality, because if you gave consent to the system, you turned your back on a mass murder. We knew that the system was based on a monstrous lie, and this made us immune to propaganda.”

The subject is especially resonant for Wajda. His own father, a cavalry officer, was amongst the victims. The future director was fourteen when the Katyń bullets were fired. He still carries a well of childhood memories – his father teaching him how to draw, and not least, how to ride a horse. However, he downplays the extent to which this is his most personal film.

“The main difficulty was that as this was the first film about Katyń, a certain number of background events had to be presented.”

Thus we see the double invasion of Poland by the Nazis and the Soviets in 1939, and the subsequent imprisonment of Polish officers in Russian camps. We are also shown aspects of the German campaign of liquidation, such as the arrest of Polish professors at Krakow’s University.

“Of course, future directors could do a fine psychological drama, showing the victims’ internal plights. Or one could do a purely political film – Stalin, Anders, Churchill, Sikorski… Another good theme would be to show how the West drew back from the crime, so as to avoid conflict with Stalin.”

As it was, when Goebbels released footage of the mass graves in the Spring of 1943, Churchill did not hold many illusions: “Alas, the German accusations are probably true,” he told General Sikorski, “the Bolsheviks can be very cruel.”

However, Roosevelt and Churchill did not circulate incriminating evidence against Russia. Stalin was now a key ally against Hitler, and the Katyń affair was swept under the carpet.

Although Wajda refrains from touting Katyń as an autobiographical film, he says that he did indeed have to show two elements that were crucial to his own experience. Much of the film, largely set in Nazi-occupied Krakow, revolves around wives waiting for news of their husbands, trying to cut through the propaganda.

“The first film had to show the crime – and the lie. The crime: that was indeed my father who was murdered there. The lie: my mother was one of the ladies who was constantly trying to find information, she was writing to the Red Cross in Switzerland, she clung on to the hope that her husband would return from the war.”

For most viewers, the film’s most indelible sequence will be the finale. Wajda has shown the massacre in cold blood. It is a lacerating experience that has left audiences speechless. “I knew that I had to confront these themes,” he says, “and I am glad that the film is behind me.”

Katyń is released in the UK on June 19th. The film will be playing at selected cinemas across Britain. For the full transcript of the interview, please see: Andrzej Wajda on Katyń: The Full Transcript