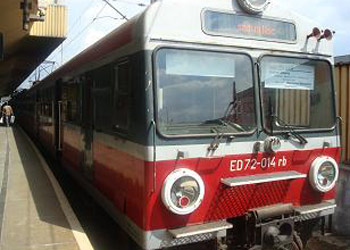 40 złoty or 25.20 with a student discount? That is all you have to pay to travel between Krakow and Warsaw on the new InterRegio (IR), a fast, comfortable, and cheap train service. The new line should finally put a stop to the IC/EX monopoly, which charges more than 97/107 złoty for the same trip. What’s bad for business is good for the customer, so let the price wars begin!

Between June 5th and December 12th, 2009, PKP Przewozy Regionalne (PKP PR) offers travellers daily departures from the Main Rail Station at 7:20 am (M-Sat) and 11:25 am (daily), and beginning June 30th an additional departure time will be added at 6:25 pm (M-Fri; Su). Tickets can be obtained at any of the ticket booths at the train station. You can find the trains at Peron 5 (Platform 5).

According to the PKP PR official website, this offer is directed at passengers who will be travelling long distances and often choose their mode of transportation based on price. The new IR will rival current express train services and far surpass them in offering more affordable ticket prices, without compromising comfort.

Are we finally on the brink of faster train travel in Poland? For a country with an area of 312,685 km², or the 9th largest country in Europe, faster trains are a necessity. With potential EU funding and the upcoming Euro 2012 things are looking up, but it will take some time before the rail system is back on track. The railway infrastructure is crumbling in many areas of Poland and needs to be completely redone before faster trains can be introduced safely. The IR Krakow-Warsaw, along with IC and EX, runs on a completely modernized track, the Centralna Magistrala Kolejowa or CMK, and promises to get its passengers to their destination in 3 hours 20 minutes.

The rivalry between PKP PR and PKP InterCity is also growing. InterCity hopes to win a contract worth 1.5 billion złoty and add 20 super trains to its current fleet by 2012. Foreign competitors eagerly await 2010 when the rail passenger transport market will be open among all EU countries. What will happen with the Polish rail system Only time will tell.

Other InterRegio connections from Kraków include Rzeszów, Wrocław, Przemyśl, Opole, Zakopane and Oświęcim, among others.