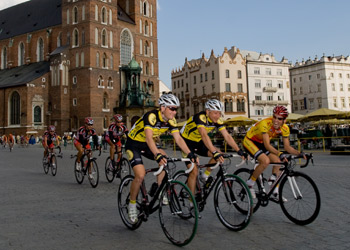 A colourful spectacle greeted visitors on the Market Square early yesterday evening, as a rainbow of spinning wheels and Lycra zoomed by. What were they chasing after so madly under the descending sun? The 26th Cracow Golden Ring.

Just a few hours before, metal barriers had appeared seemingly out of nowhere, and separated the Sukiennice from the remainder of the square. Then, vanload after vanload of cyclists unloaded, clad in colourful biking outfits and making last-minute adjustments to their cycles.

The race, which began after 5 in the afternoon, featured a shorter junior trial, followed by the main event, which saw 92 cyclists competing.

The winner, Tomasz Kiendyś, told Gazeta Wyborcza that he nearly crashed into the barriers set up to mark the racers’ path: “It’s a special place to have a race,” he remarked about the Market Square. Though after circling around it 57 times to make up the 40 km of the race, one would imagine that Kiendyś is now thoroughly familiar with Krakow’s most famous landmark.

The race around the Market Square was only the first of several that will make up the 47th Małopolska Mountain Race. Today, the racers will face the 137 km path between Gdów and Spytkowice, followed by a return to Krakow on Saturday for a race to the Błonia Commons.