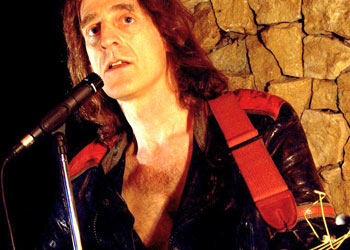 On the 20th of June, Alex Carlin, a musician from California and a part-time resident of Krakow, will attempt to break the Guinness world record for longest solo concert performance.

The stage will soon be set in Bourbon Street, a club in the small Polish town of Radomsko, near Częstochowa. From 9 am on Saturday the 20th until 12:03 pm on the 21st, Carlin will perform non-stop, playing covers ranging from the Beatles to Led Zeppelin, as well as his own music. The concert is part of the “Days of Radomsko” festival.

A few days before the concert, the Krakow Post spoke with Mr. Carlin:

Krakow Post: First of all, what inspired you to attempt to break this record?

Alex Carlin: It’s a long chain of events: one year ago I was walking down the street in Wrocław and I saw a klub called “Liverpool”, so, since I know all 227 Beatles songs, I asked if we could make a special marathon koncert playing all those songs. The manager said yes, but the owner said no. Later in Bielsko-Biała, my friend Kukiola who owns the club Galeria said he wanted to do that Beatles marathon, but it must be a Guinness record. However, when I was in the Guinness office in London they said playing all of the Beatles songs is not a “record” – it’s more like a Ripley’s Believe It or Not. But they suggested that I break the existing Guinness Record for “Longest Solo Concert”. At that moment I knew I would break this record.

KP: Have you been doing anything special to prepare?

AC: Nothing special, but my normal life has been constantly preparing me for this. For example last Monday night: I played in Piekny Pies and Decafenecia until 8 am and then I did not sleep until after my midnight Tuesday próba [rehearsal] with my band The Henchmen – this is typical for me, and a very good training!

KP: On your website it says that Poland is your favourite country – why is that?

AC: I can’t live in the USA – in California the bars close at 2 am! There is much more freedom here in Poland. Poland has so many towns where I come to play several times in a year with great atmosphere and people – and without laws requiring that the bar must close. Also the mountain areas of Bieszczady, Krynice and Zakopane have a lot of magic. The mentality of the Polish people for me is an important antidotum to the “disease” we are victims of in the West. Western propaganda and mind-control is subtle but it works and it makes people boring! Plus, of course, the girls here are amazing – very beautiful of course, but also they really have things to say – and it’s good that they are smarter than me. And hey, I went to skałki today – it’s paradise!

KP: Why did you choose Krakow to live in?

AC: For sure I fell in love with Krakow, but I actually “live” on the road worldwide – I am in Krakow just sometimes. Ale kiedy wracam do Krakowa czuję się jak wracam do domu [But when I return to Krakow I feel like I’m returning home]. Krakow has a medieval magical feeling that you can tangibly sense. It makes me feel inspired to play music, write songs, stay up all night in a roaming non-stop party action. Each time I walk out into the streets of Krakow I think to myself “will it happen again this time?” and by the “białego rana” the answer is always yes.

KP: What do you think will happen on Saturday?

AC: It will be a fun carnival-style party – I will smash the record easily – we will celebrate into late Sunday night. The people at Pub Bourbon Street where the show takes place are great folks – and there will be 15,000 people who will be around for the festiwal “Dni Radomsko” and my marathon, so I am sure there will be a lot of action.