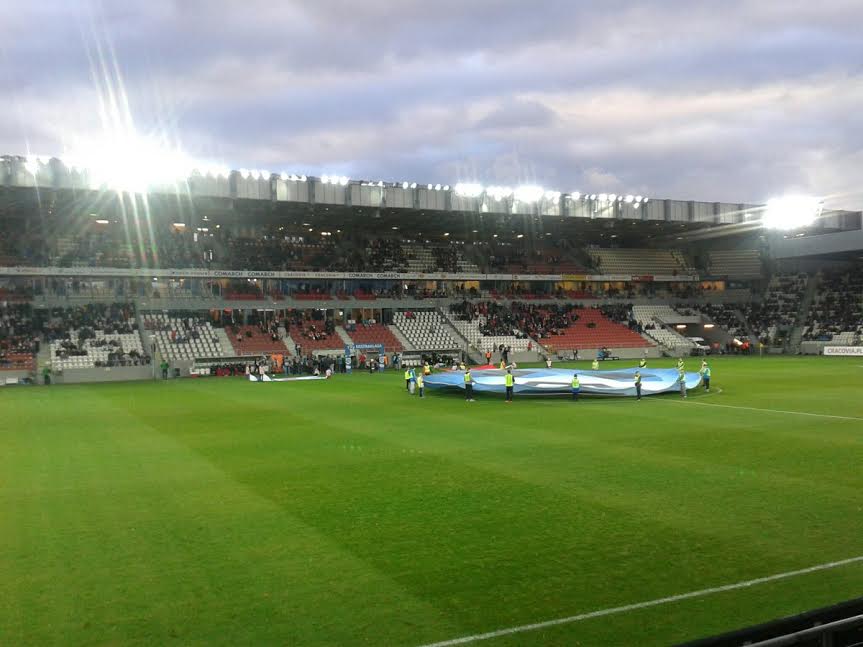 Cracovia’s frustratingly unsettled season continued with this somewhat unfortunate loss to title contenders Jagiellonia in a match which was dominated by the performance of referee Szymon Marciniak, whose UEFA status seems increasingly under question after a series of bizarre decisions.

A fairly even match unfolded, with Jagiellonia looking slightly more threatening, but Grzegorz Sandomierski in the Cracovia goal gave an outstanding performance to keep the game scoreless for most of the first half. Just before half time, Jagiellonia appeals for a penalty-box handball by Cracovia’s Miro Čovilo were ignored by the referee, instead awarding a corner. A full half-minute later, confusion rolled around the stadium when Marciniak finally took notice of his signalling assistant (who had been much further away from the incident), then awarded a penalty to the visitors. Television replays seem to suggest this was a harsh penalty, and the frustration at this decision came across in the hot-tempered remainder of the half.

Fans are keenly familiar with the notion that a referee will seek to atone for bad decisions and even up injustices, and indeed a cynic would find this the most credible explanation for the game’s second penalty. Kelemen in the Jagiellonia goal dived to collect the ball from the feet of a Cracovia striker, who then fell over the prone goalkeeper. To their credit, the Jagiellonia defenders didn’t bother to protest too much, a fair reaction to the referee having lost control of the game. The penalty was converted, but at this stage the game had clearly spoiled, neither team having confidence in the fairness of the arbitration.

To give full credit where due, and to crowbar some football into this match report, the visitors’ attacking partnership of Vassiljev, Černych, and Romanchuk was too much for Cracovia’s ageing defence to deal with, and even in this mess of a game demonstrated why they are in with a great chance of prising the title away from Legia this season. Quick thinking, intuitive through balls, and constant movement to provide passing options meant that only the form of Sandomierz in the Cracovia goal – plus a little profligacy with clear chances –kept Cracovia in the game until the 80th minute.

Speaking of Legia, next up for Cracovia is a trip to the capital, where they will have to do without top scorer and midfield anchor Miroslav Čovilo, whose yellow card for ‘handball’ takes him over the suspension limit. Given the reigning champions’ poor form this season, it’s not entirely unfeasible that Cracovia could record their first away win of the season, but it will require a much more solid effort than this.