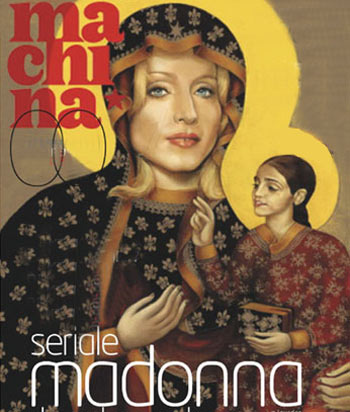 Madonna’s first ever live stage performance in Poland has caused outrage in Catholic groups all around the country. Her “Sticky & Sweet” tour is the star’s eighth concert tour, supporting her eleventh studio album, titled Hard Candy. In 2008, the tour was a roaring success, breaking Madonna’s previous record and becoming the highest grossing tour by a solo artist.

Unfortunately, the tour has prompted scandal and frustration in sections of the Polish community as the date of her Warsaw appearance clashes with the day of the Solemnity of the Assumption of the Blessed Virgin Mary. The Catholic Church’s holy day is devoted to worshipping the original Madonna.

A member of the Mazowiecki regional assembly, Marian Brudzynski, announced that a protest committee is being organized to stop the concert, stating: “Madonna cannot sing on this holy day and we are calling for a moral stand in Warsaw.” He also added that if they fail to stop the concert altogether, they will stage a massive picket outside in a bid to “stifle Madonna”.

Madonna’s performance, which includes her arriving on stage attached to a giant, glitzy cross, has already sparked major controversy, and the “Queen of Pop” certainly knows how to provoke debate. It was only three years ago, in 2006, that Madonna sparked another controversy when her face appeared on the cover of Polish Machina magazine as a replica of the Black Madonna of Częstochowa. The monks of the Jasna Góra monastery published a statement saying that they were shocked to see a sacred symbol used in a profane way for advertisement and publicity.

Last year, on the Roman leg of her tour, the 50-year-old dedicated her hit song “Like a Prayer” to the Pope, saying “I dedicate this song to the Pope, because I’m a child of God.”

Together with the Vatican’s accusations of blasphemy, Madonna’s inappropriate stage imagery has been claimed as one of the most “satanic shows in the history of the humanity.”

Krzysztof Zagozda of the Catholic sect Unum Principum also shared his opinion about the star’s concert date: “It offends our religious faith. Besides that, Madonna’s performances are anti-Christian.”

In addition, Russian religious groups have asked for Madonna not to blaspheme at the scheduled August show as it’s taking place near to a holy building.

The 13 Europe dates have grossed over $74 million in sales, piling on plenty of record sell-outs and making it hard to imagine that the show will get cancelled. The event is highly anticipated by fans, and it would be a huge disappointment for them if it the dates were altered in any way.

However, the society is still strongly pushing Polish government officials and tour promoters to cancel the awaited show.

One thought on “Madonna Arouses Protests”