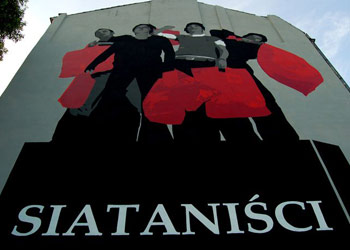 The dressing rooms in the theatres are now closed, on the Błonia the blue, red-flagged tents are folded and there isn’t a dragon in sight. So what does Krakow have to offer now?

Kept in the framework of Krakow’s “6 Senses” project, the Art Boom Festival has already started to take over the streets. Following its project brothers Selector and Off Camera, Art Boom is bound to be a success.

The mission statement is to move Krakow forward in acceptance and promotion of modern art. Organizers want to ensure that the effort put in reflects Krakow’s position on the map of contemporary art. Each edition will follow a different theme, this year it being Krakow itself. Artists from all over Poland will have a chance to confront global art and create public pieces, using urban space. The idea behind this year’s theme is to portray Krakow as a creative place, an inspiration to create new manifestations of art. The artists will confront today’s Krakow, breaking the city’s stereotypes.

Art Boom also wants to make the city even more beautiful, as some of the best projects will permanently remain in Krakow’s public areas. Some art pieces will even make it into the National Museum‘s permanent collection, making this festival even more unique.

The art itself is designed to make you think. From Roman Signer’s radical canoe installations on the Market Square, to Rafał Bujnowski’s “Woman’s Vengeance in the City Centre,” the pieces touch on interesting aspects of city life. Up until now we would flee the scene of any violence and crime, but until the 22nd of July just stay where you are, because it’s art you’re witnessing. You can check out the latter in the video below: