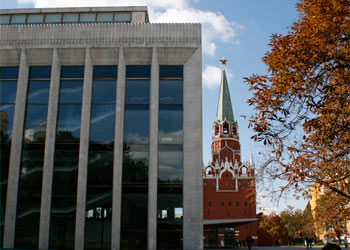 As the latest episode in the never-ending drama that epitomises Polish-Russian diplomacy unfolds, the Krakow Post asks what an article blaming Poland for the start of WWII – posted on the Russian Ministry of Defence (MOD) website – means for the countries’ bi-lateral relations.

The research paper, entitled “Fabrications and falsifications in evaluating the USSR’s role in the run-up to and at the beginning of WWII,” written by the Russian MOD’s in-house historian Colonel Sergei Kovalyov, appeared on the Military Encyclopaedia section of the Russian MOD’s website in early June.

It suggested that Poland’s refusal to agree to German dictator Adolf Hitler’s “moderate” demands of allowing the construction of an ex-territorial highway linking Germany with East Prussia (today the Kaliningrad Oblast), as well as the incorporation of the free city of Danzig (today Gdańsk) into Germany in 1939, spurred on events leading to the outbreak of WWII.

“This kind of action is more likely to cause damage for Russia […],” Slawomir Debski, director of The Polish Institute of International Affairs, told the Krakow Post. “Groups exist in Russia, which are interested in bad relations between Poland and Russia, and they live in hope that these relations could be damaged by placing such articles on official government websites.”

The paper describes events leading to the start of WWII, including a secret pact signed between Russia and Germany (the Ribbentrop-Molotov Pact), which outlined a plan to divide Europe into Russian and German spheres of influence, and which is believed by most historians to have spurred Hitler on in his plans to invade Poland.

The Russian MOD has since removed the paper from its website. The Russian Embassy in Warsaw assured the Krakow Post the Kovalyov research paper does not represent the official view held by the Russian MOD.

“The [MOD’s] press chief announced that this is not the official position of the Ministry of Defence,” Embassy Press Secretary Vladislav Vybornov said. “I don’t know why this issue is being blown up by newspapers.”

International commentators have mused as to whether the paper could be part of a general trend in Russia to de-criminalize certain acts carried out by the state under Dictator Joseph Stalin. The debate was fuelled by a law drafted by the Russian parliament (the Duma) making it illegal to publish articles damning the USSR’s role in the Second World War.

While Director Debski from The Polish Institute of International Affairs calls the article a “sputter from the marginal intelligentsia,” he warns that the fact that it was posted on an official website could either be indicative of a certain amount of disarray within Russia’s official institutions or a deliberate provocation carried out by departmental heads.

“It also raises the question about whether this is the result of policy undertaken by departmental heads or whether we have to do with a mess, which is a far worse option as it begs the question as to what other areas are not under control,” Debski said, adding that the incident will not weigh heavily in Polish-Russian relations.

Since the Civic Platform (PO) led coalition government took power in 2007 Poland has worked steadily to improve relations with Russia. Polish Prime Minister Donald Tusk cautiously awaits a state visit by his Russian counterpart Vladimir Putin, planned for late spring. The government hopes that incidents such as the posting of the Kovalyov paper on the MOD website will not overshadow diplomatic relations between the two countries.

The Polish Foreign Ministry has not commented on the issue but it has asked for an explanation from the Russian ambassador in Warsaw.

One thought on “Russian Historian Blames Poland for WWII Outbreak”