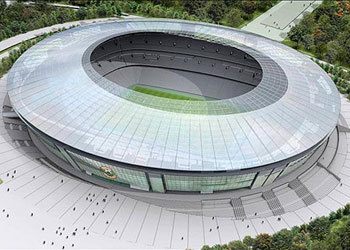 Last month, Ukraine received a reality check and an ultimatum when UEFA President Michel Platini announced the host cities for Euro 2012. While Poland received the proverbial pat on the back with the selection of four of its cities and recognition of their readiness, Ukraine’s preparations began to look spotty in comparison.

Platini declared that the only Ukrainian city on track to host the tournament’s matches is currently Kiev. Meanwhile, the remaining cities slated to host matches – Lviv, Donetsk and Karkov – have until the 30th of November to prove their preparedness or risk missing out on the tournament completely. While Platini expressed his support of Ukraine and his desire to see the countries organise Euro 2012 with four host cities each, he stated that if the previously-mentioned cities fail to meet the criteria by November only two Ukrainian cities will host the tournament.

And now, news of the country’s failures in tournament preparations has begun to leak out. According to a report in the BBC from this weekend, even as the country’s brand new stadiums are rising on schedule, its infrastructure upgrades have fallen drastically beyond schedule.

A prime example is the city of Donetsk, in the Donetsk Oblast in eastern Ukraine. The brand new Donbass Arena is scheduled to open this August and features state-of-the-art architectural designs and a capacity of 50,000. It will be home to Shakhtar Donetsk, a winning team in the Ukrainian Premier League.

However, despite the stadium’s credentials – it will be the most advanced in the country – it may never see a Euro match, at least not in 2012. Because what good is a shiny new stadium when not enough planes can land in the Donetsk airport, when the roads leading to the stadium are barely drivable and clogged in traffic, and when the city’s hotels do not hold enough beds for the weary spectators?

The main problem stems from economic and political gridlock. Economically, Ukraine has been hit badly by the economic crisis, and developers simply cannot get the funds to build the needed hotels and infrastructure improvements. Politically, local politicians have been fighting over contracts rather than pushing for much-needed infrastructure investments. And with elections coming up in January, politics has played an increasingly significant role in preparations for the tournament.

However, last week Ukrainian Prime Minister Yulia Tymoshenko told the RIA Novosti press agency that everything is on track, stating: “I would like to point out that preparations for Euro are going well and at full pace and that the championship in Ukraine will be fully provided for.”

Ukraine has until the end of November to prove its readiness; however, the change in its policies must come much sooner if the country wants to retain any hopes of an equal partnership with Poland in hosting Euro 2012.